This year was set to be one of the busiest for DRG with their involvement in British Championships meaning a lot of travel around the north, as well as a few home games and a full Home Teams tournament. 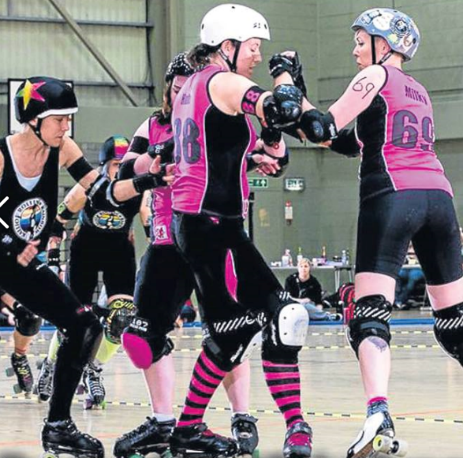 What followed was a hectic season with the Tayzers playing more games both home and away than ever before. First up was a repeat of the first game of the previous season against Granite City, but this time as part of Tier 3 North for British Championships. This was a slightly surreal game, playing one of our closest neighbours in Rainy City’s Thunderdome in Oldham. DRG’s Tayzers again took the win, 366-58. The following game against Halifax was forfeited by Halifax, giving DRG a 300- 0 victory. The next few months saw the Tayzers take on Liverpool, Sheffield and Furness in the final three champs fixtures. Two losses (Liverpool 152-115 and Furness (173-108) and one victory (Sheffield 190-135), meant that DRG finished a very respectable 3rd in the first champs season, only narrowly missing out on a playoff place. With the tiers having been rearranged for next season DRG will be looking to progress from this and aim for promotion. The autumn began with the Tayzers and Bonnie Colliders playing some home games. The Colliders team was all change from last season, with the game being the first for many. Their first opponents were the Dollie Mixtures (a mix of skaters from leagues across Scotland). The Dollie Mixtures experience showed and they came out on 185-110. The second game of the day saw the Tayzers take on another DRG in the form of Dorset Roller Girls. The home DRG took the win 195-104. Following on from this in October, the Colliders took on Newtown, winning 234-76 and the Tayzers victorious in a very tense and close game against Dublin B team 238-195. November held the final games for the Bonnie Colliders and Silvery Tayzers. The Colliders were taking on BCR’s Central Belters with the visiting team taking the win 171-95. The Tayzers then had their first experience of European opposition with the visit of Kallio Rolling Rainbow’s B team the Kinapori Fistfunkers all the way from Helsinki. This was a really exciting game to watch with a different style of play from the Finns who ultimately came out on top with a 261-134 win.

The season ended with the second full Home Teams tournament. This provided a great opportunity for some of our newer skaters to take part in full games and gain some experience before the start of the new season. Again all three teams played against each other, with the final ending in a nail-biting finish. The Press Gangsters held on to their trophy from last season, edging the win over the Jutes of Hazzard (131-128). This year, Dundee’s officials have continued to grow both in number and experience - DRG now have nine on-skates officials and have officiated numerous tournaments and events in the last year. DRG officials have staffed games in almost all of the British Champs tier levels for both men and women (including a divisional head referee for women's tier 2), dozens of games around Scotland, many in England and several in Europe. The officials have also been to several tournaments, including Furness Firecracker's Sur5al bonanza in Blackpool, BEARDi in Cannock, 4Nations in Birmingham and Beach Brawl in Fort Lauderdale (USA). Officials' training continues in strength with both monthly on skates and off skates sessions. Several of the officials recently sat the infamous "Hellahard" rules test for WFTDA certification (some of which even passed!) and refs will be testing their skate skills out for certification at the last training session of the year thanks to Auld Reekie Roller Girls. Righteous Oxide also recently featured in the local newspaper as part of their 20 questions section in the sporting post. 2015 was a fantastic season for DRG with all skaters and officials gaining valuable experience to take into 2016.