Glasgow to pack May with events!

With Glasgow Roller Derby's Irn Bruisers taking a short break after completing their fixtures for British Champs, that doesn't mean that the league are slowing down in other areas. In fact, this May looks like being busier than the previous months in terms of events! 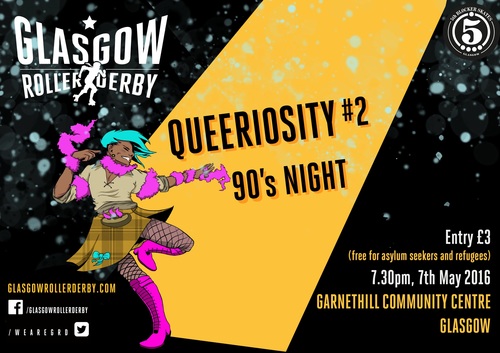 Firstly, May 7th sees the return of GRD's popular Queerosity night from earlier in the year, this time with a 90s Grunge feel. The night will run from 7:30pm to midnight, at Garnethill Multicultural Centre, and tickets are available for just £2 online (£3 on the door)!

Then, on May 21, GRD B, the Maiden Grrders, will be taking on Blackpool Roller Derby. Blackpool have had quite a Scottish theme for their year already, having sent a team to the Fierce Valley hosted sur5al and, of course, been both hosted and competed against by Aberdeen's Granite City Roller Derby in Tier 4 of British Champs. This bout sees the Blackpool Roller Coasters play their toughest opponents yet; the Maiden Grrders are higher ranked than any of the teams in Tier 4 North! The bout will be held in Glasgow's traditional venue, the ARC Sports Centre at Glasgow Caledonian University, starting at midday. Tickets will be the usual £6 online, or a little more on the door. 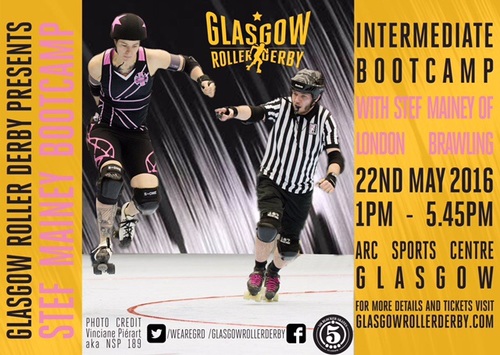 However, the jewel of the May schedule comes the day after, as London Brawling's Stefanie Mainey will be holding a Co-ed Bootcamp, hosted by GRD on May 22nd. To take advantage of her considerable experience as both a coach and skater in one of the top 4 roller derby teams in the World, this will be an Intermediate Skills bootcamp. Tickets for offskates observers are also available, at a reduced rate (£25 versus £50 for onskates). Hosted at the ARC, the bootcamp will fill the afternoon from 1pm to 5.45.