Regular readers will have noticed that we've had something of a diversion from our regular content recently, as the second Men's Roller Derby World Cup, in Calgary, approaches.

However, exciting derby hasn't stopped in Scotland, or Europe, so we should catch up on what's coming more locally...

For those who'd like a Roller Derby extravaganza a little closer than Calgary, or Las Vegas, this week sees the very first Euro Derby Con, styling itself the "1st Annual European Roller Derby Convention". Organised by Track Advantage, the con will feature plenty of on-track action (including both sanctioned games and more eclectic challenge bouts), as well as off-track seminars and plenty of vendors in the shopping area. Euro Derby Con is in Barcelona, Spain from the 14th to the 17th of July.

We hope to have feedback and reports from this exciting event from attendees after it completes. 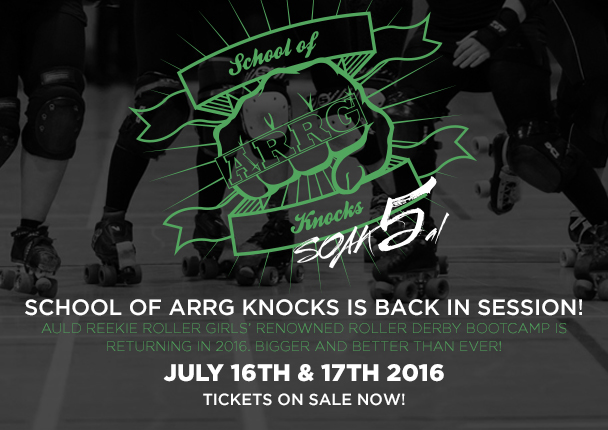 Even more locally, Auld Reekie Roller Girls are holding their 5th "School of ARRG Knocks" bootcamp on the 16th and 17th, now featuring both co-ed multitiered training (with slots for pre-mins, intermediate and advanced skaters), and a "Sur5al style" tournament on the Sunday afternoon. It seems that tickets are still available, at Brown Paper Tickets (be sure to pick the tier of ticket you want, there's quite a few options!). ARRG also have their traditional Fringe events coming up soon, this time featuring a double header against Dundee Roller Girls and Glasgow Roller Derby. Check it out on August 6th, at the event page here.

Speaking of Dundee Roller Girls, they're also in the teaching zone, with their second "Open Learning Scrims" of the month, on Friday 15th at their usual venue of the Dundee International Sports Centre. And if you have the taste for bootcamps later on, look out for DRG's first ever Post-Mins bootcamp, "Skate Tay Victory" in September!

Glasgow Roller Derby also have a busy August planned, following up their challenge against Auld Reekie above with a double header exhibition extravaganza on the 20th, which will see Soy Division (the UK's Vegan derby exhibition team) take on Vagine Regime UK (the UK's L(G)BT derby exhibition team), followed by a "Science v Fantasy" themed bout. Glasgow Roller Derby has quite a few skaters in both Soy Division and Vagine Regime UK, so this will be a pretty interesting bout to see...

...but Glasgow's next official bout will be the week after, as their B and C teams (the Maiden Grrders and Canny Gingers) travel all the way up to Aberdeen on the 27th to take on Granite City Roller Derby's Northern Fights and Fight Hawks in another double header!

In the midst of all this excitement, we should also note that Fierce Valley Roller Girls are also not resting; with Preston Roller Girls hosting the last round of the British Championships Tier 3 North, FVRG will be taking on the hosts (and Dundee taking on Hallam Hellcats) to decide the final places on the 17th of July. These are especially important games for both Scottish teams, in opposite directions: Fierce Valley need to win against Preston to move up from the bottom of the table, while a Dundee win against Hallam will give them a good shot at taking the top of the table from incumbents Manchester!

FVRG will be hosting themselves a month later, as 18th August sees the return of their Charity Co-Ed Scrims.

That's all the derby we are aware of in July and August... but there's exciting things afoot in September as well!