Granite City Roller Derby's rebranding (from Roller Girls) at the end of last year obviously prefigured some kind of Pokémon style evolution to a new level of performance.

This year has been an exceptional one for the league to date. A-team, the Northern Fights, absolutely demolished their Division in British Champs, taking the top spot after convincing wins against fellow Tier 4 North members Spa Town, Halifax Bruising Banditas and Blackpool Roller Derby League, and earning promotion into Tier 3 North next season. They've gotten 3 skaters into the Team Scotland 2016 Training Team. And their B-Team, the Fight Hawks, have embarked on a second successful year of bouts, working their way up the rankings.

Now Granite City are trying to top things off with a double header at home on 27 August, placing the Northern Fights against Glasgow Roller Derby's tough B-team, the Maiden Grrders; whilst the Fight Hawks take on a mixed team of great skaters from Doonhame Roller Derby, Ayrshire Roller Derby and Mean City Roller Derby.

We caught up with GCRD's Krusty, the Northern Fights' Co-Captain (and Team Scotland Training team member) Udder Mayhem (Christine), and Fight Hawks' Co-Captain and Northern Fights Bench Manager Pert Hits (Sam) to see how the league feels about their year. 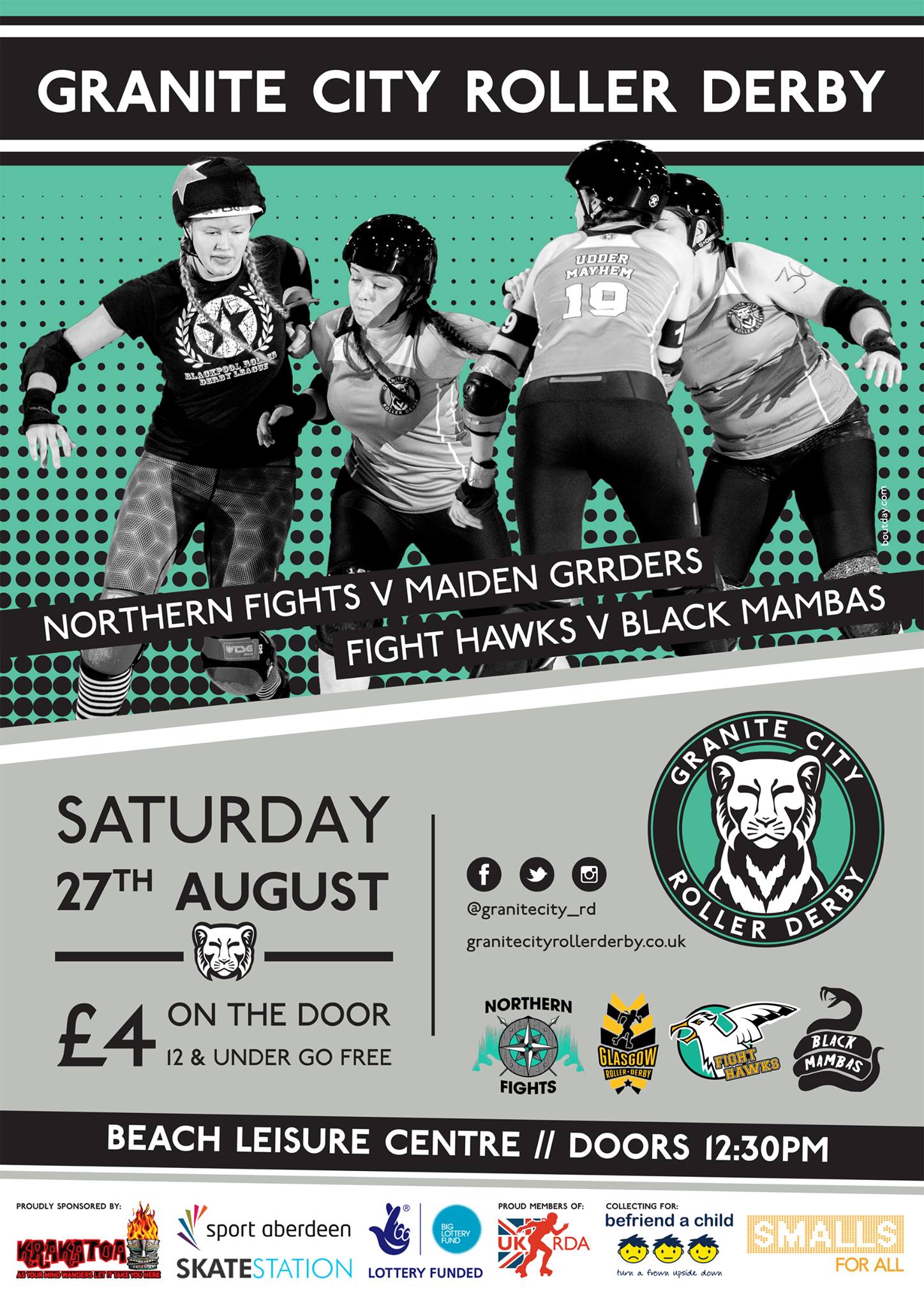 Obviously, 2015 was not a good year for Granite City at Champs, ending with your relegation to Tier 4 from Tier 3. This season, however, you've really stepped into gear, convincingly topping the table for promotion back up into T3! Did you make this a conscious aim for the year, and what changes did you make to help it happen?

Christine: 2015 was a challenge for us. We lost some experienced skaters, but we also gained new ones, however, we hadn’t quite gelled into the team we knew we could be.

The disappointment at the beginning of 2015 forced us to refocus our tactics and to adopt the use of specific line-ups. To facilitate this, the Fights organized extra “team time” dedicated training sessions, which was funded through the skaters own fundraising efforts (e.g. boot sales, personal fundraising etc.). We were very determined to be the awesome team we knew we could be!

We didn’t win all of our games, but we started to perform much better against higher ranked teams, and finished British Champs 2015 with a convincing win against Halifax Bruising Banditas.

For 2016, fortnightly team-focused sessions have continued as part of our structured training, and are now funded by the league for both the Fights and the Hawks. We recognised the importance of training as a team, especially as GCRD continues to grow. We’ve gelled really well this year as a result, and this is reflected in our performance in Tier 4. We hold regular team meetings to revisit our goals, and are planning for a more successful time in Tier 3 in 2017. Bring it on!

Sam: The regular team training has certainly helped the team bond and act as an effective unit. These sessions also allowed the 2016 Bench staff (myself and Krusty) to really focus on the team, feedback what was working and direct the team to further their game, the game they want to play. It has been really pleasing to see the team numbers grow, allowing them to move away from specific line-ups and into a direction where they know each other and their play and it doesn’t matter who they are lined up with.

GCRD have also had a good year in National terms, with 3 skaters (including two of your highest rated jammers in Champs) making it through to the Team Scotland Training Squad selection. I think last time you had 4, but it's also true that less GCRD skaters tried out this time. How do feel about your skaters making the training team (and the training team itself having skaters from so many leagues)?

Christine: As one of selected skaters, I am obviously delighted that I managed to make it through to the training squad, along with the brilliant Rock’N Riot and Jo Mamma. All three of us are also coaches, and we are keen to soak up as much as we can and bring it back to GCRD training sessions, so that the skills we learn can be passed on to benefit the rest of the league.

To answer the other question, I am personally thrilled to see so many talented skaters from a variety of leagues! It will keep things interesting as every league is different, and we can all learn new and awesome things from each other. We had our first session a couple of days ago, and it was a fantastic and positive experience. I asked the question “how many hours did you drive to get here?” many times that day!

Sam: Echoing Christine, we are very proud of our skaters being selected for the Team Scotland training squad. Each year we have had good representation at Team Scotland try outs and then onto Team Scotland itself. Seeing such a variety of leagues represented on the training team is so reassuring that the sport in our wee country is really progressing and skaters really advancing. Some exceptional high-level derby being played across the country!

This upcoming bout against Glasgow's Maiden Grrders is your first non-Champs bout this year. This is something of a delayed rematch - the last time Granite City faced the Maidens was in 2013, where Glasgow took a convincing win. How are you feeling about this time around?

Christine: We look forward to welcoming the Maidens to Aberdeen, and are excited for the challenge! A lot has changed since 2013 and it will be a very different experience for both teams involved. For instance, when the Fights last played the Grrders, I was more focused on passing my minimum skills! We’ve been working very hard the past few months, and this will be a good test for us as we approach Tier 3 again.

Sam: The best test for us! The team are really looking forward to this challenge, aiming for all the hard work to pay off and give the Grrders a run for their money. I think the skaters involved, from both teams, have changed so much since 2013 it will be really fun game both to be part of, but to watch too!

With the Northern Fights busy with British Champs, GCRD B have had most of the flexibility in their fixtures. You’ve taken on both Dundee B (the Bonnie Colliders) at home, and more recently, Auld Reekies ASTROs away. Are the Fights jealous of your free schedule, and what’s next for the Hawks?

Christine: I guess I am a little bit jealous, but pinning down games has been somewhat of a challenge for both the Fights and the Hawks, especially in the first half of the year. A lot of work has been done behind the scenes to try and remedy it, however, there were home game slots for both May and July that I couldn’t find a team for the Fights to play against, and July’s date was completely cancelled in the end. Now we are approaching autumn, and Champs is finishing for most teams by this point, we are finding it much easier. We have one more home game against Sheffield Steel Roller Girls in October, and are playing ARRG’s All Star Reserves in November, which should keep the Fights busy! It should also challenge us, and help us to prepare for Tier 3 next year.

Sam: If they are they’ve certainly not voiced it… but I guess travelling (half) the length of Britain once a month for 3 or 4 months keeps you busy and focused. They are certainly excited about the few home games we have planned for the later half of the year.

The Hawks have a few games in the pipeline, a couple more double header home games and an away game too. As a team, we are still evolving and finding our game but as time is moving on we are gelling better as team too. As Co-Captain, I’m excited for the skaters to get more games under the belt and get the opportunities to play and show-case their hard work. I am also really looking forward to training with our freshly minimum passed skaters and helping build them up to game time! Some very exciting skaters are on the up through not only our minimum course, but our Intermediate training group too.

This is the first time for the Fight Hawks taking on a mixed team of skaters from across Scotland. How do you plan for that, and how are you feeling about taking on some of the rising stars from Ayrshire and Doonhame?

Sam: Our plan is probably similar to if we were preparing for any other league team; play OUR game. Training alongside the Northern Fights, and scrimming against them as teams, has really helped us focus on our weaknesses and up our skills.

We are really looking forward to taking on Ayrshire and Doonhame! As noted previously, I am always super impressed and excited by the calibre of roller derby coming out of every league and I expect these two leagues to be no exception. I hope we are a suitable warm up for Ayrshire before their first home bout on September 10th.

For me, personally, having spent the first few Hawks games as their Bench due to injury, I am so super excited! I was with the Hawks standing on the side-lines during their game with Mean City, and really look forward to playing against some of the Mean City ladies in this game too.

We believe that this bout is also raising funds for some great charities, can you tell us a bit about this?

Krusty: At every home game we host, we try to give some exposure to local charities within Aberdeen and surrounding areas. We have supported local charities at every home game and managed to raise substantial amounts of pennies on our cake stall, our home bakes are kindly donated by skaters, friends and family. We are overwhelmed by the donations we receive and the generosity of our supporters (and officials!) that purchase our fine home bakes. Sales from our cake stall on the 27th August will be donated to Befriend a Child, they are Aberdeen's only 1:1 befriending service for vulnerable children and young people.

We also decided for this game that we would like to ‘borrow’ an idea we saw Sheffield Steel Rollergirls post up, holding a bra amnesty in support for ‘Smalls for All’. It’s something my work is doing too and it’s a fantastic idea! We are looking for brand new pants and new or worn bras that still have good wear in them. It’s an easy thing to organise but it will be greatly received by Smalls for All who is a charity which helps women and children in Africa.

If anyone has any great suggestions for our next charity appeal, come speak to us at the game on Saturday!