Dundee Roller girls' are hosting their second home game this season as a single header! On the 22nd of July at the D.I.S.C. Dundee, the Bonnie Colliders are taking on Bairn City (& pals!) which looks to be a mighty match! With doors opening at 12:30 and first whistle coming in at 1pm, it's gonna be a short and sweet single header. Differing from DRG's usual doubles hitters,  these two familiar sides will most certainly make the trip worth while! 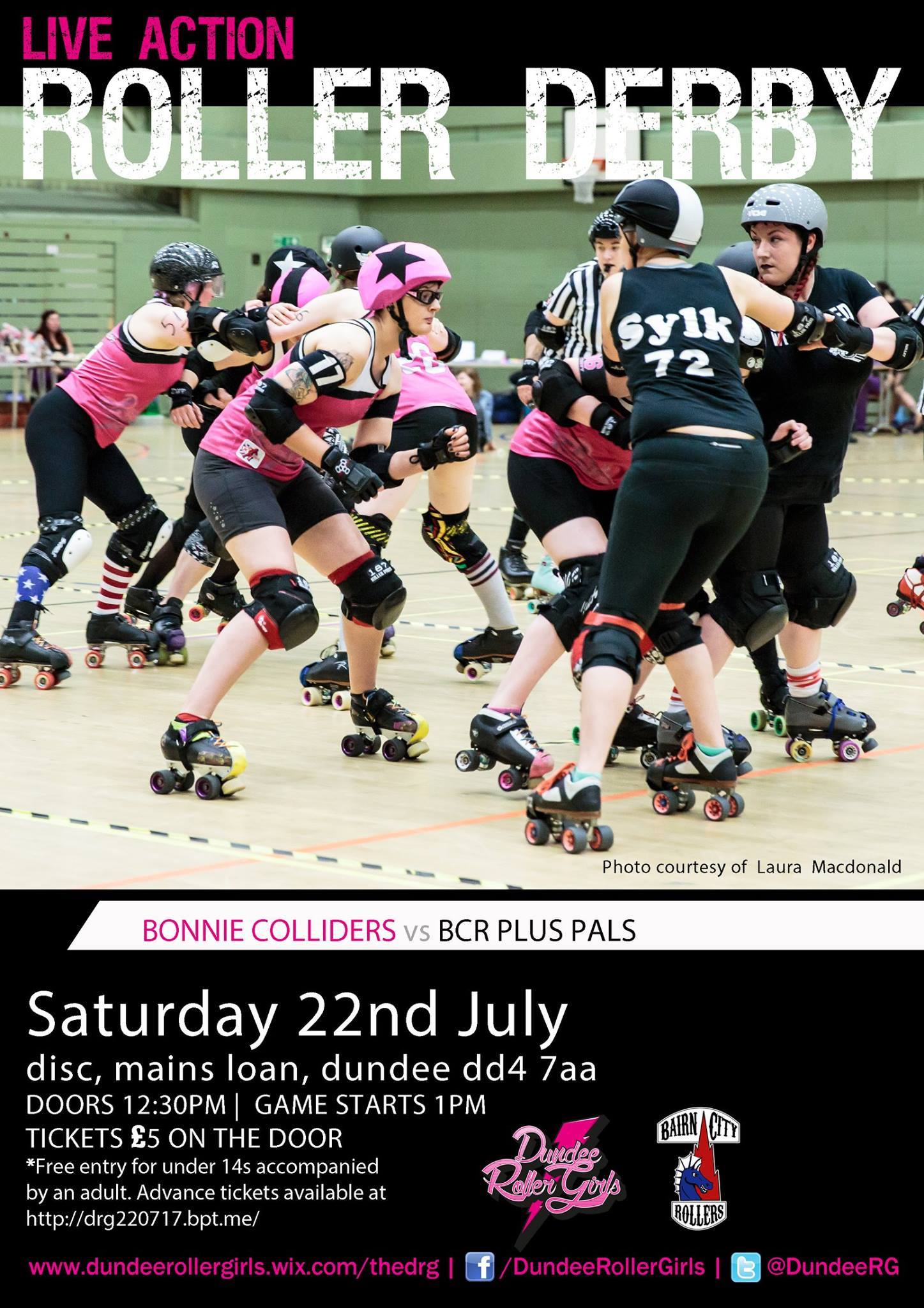 We thought we would catch up with the Bonnie Colliders Co Captains for 2017, Breezy Does It #289 and HullabaLou #17, to learn a bit more about leading and shaping a B team!

Q1: How has the season gone so far for you guys? You've have a few games already and you seem to come out strong both sides.

Breezy:  This season has been amazing so far, we've played those two games and won both, which is super exciting! The team is really starting to gel together and we are getting better every time we play. We've had a few newer skaters join us and they are coming on great and are fitting in well with the team.

HullabaLou: It's just been so epic this season, I am so so proud of everyone! To see our wee team taking the skills that we drill together every week at training and scrims, and put them into practice during games is fantastic – whether it’s fancy new toe stop spins, some super controlled one-one blocking or crushing offense; the commitment and effort from every person on the team is something that I respect hugely and do not take for granted as a Captain.

Q2: And so the Colliders have played a Bairn side a few times, with the most recent in 2015 [FTS]. How does that change your look on this match-up?

B: I was off on maternity for all of 2015 so unfortunately wasn't part of the team on that one but I was there for the previous year and it was such a tough game! Bairn have continued to grow so much since then, really we're looking at them as a brand new opponent. Which for a lot of our Colliders this season - they will be!

H: The 2015 game, was one of the firsts for quite a few of us who had just been rostered for the B team, and was definitely quite an experience for us haha! Bairn are so lovely and we genuinely can’t wait to play them again, but will definitely be needing as many of our Collidoscopes (our loyal fans) to support us as possible!

Q3: How do you guys approach a game when you are captaining, what goes through your mind? B: I approach all games in a similar manner, nervous anticipation! The difference as a Co-Captain is that I like to check in with all the skaters to find out how they're feeling, as Lou and I want each skater to enjoy themselves and feel comfortable on game day.

H: All we want as Captains is to ensure our team has an absolute blast on game day, I just want to help them smash their goals and whip out those hard-practiced skills! Colliders are definitely all about soaking up the sheer enjoyment of simply playing roller derby together! To quote our wonderful co-chair Milky “It’s just a made-up game on roller skates” and so I try to focus on that…we are from Fundee after all.

Q4: With the Silvery Tayzers (Dundee's A team) getting quite a lot of focus now with the league being full WFTDA members, do you feel that adds more pressure for you guys, or is it the opposite and you loose some track time as a B team?

B: DRG train as a league, first and foremost. We all skate together. We have skaters who've just passed their minimum skills alongside our Team Scotland skaters. It is a huge benefit to all our skaters as we work together to push each other on in every aspect. As a team, the Colliders do get lots of track time together to work as a unit, and practice our tactics and skills, but training alongside the Silvery Tayzers really pushes us out of our comfort zones and helps us develop further.

H: DRG definitely think of ourselves as a league rather than 2 teams – we train together, scrim together and thoroughly support each other; the success of the Tayzers and their sweeeeet wftda ranking (266th!) [16/07/2017 FTS] has only boosted our league spirit. And likewise when the Colliders smash it, the mad support from the rest of the league is just unparalleled. Personally, that’s one of the things I love most about DRG: Our wonderful bouting committee have always placed an equal importance on getting games for both Colliders and Tayzers….so short answer – no, we never lose track time!

Q5: With that in mind, what do you guys aim for, for yourselves and your team? It must be hard to maintain such a close-knit team, with skaters moving on to the A team or with the new intake coming up.

B:  My aim is to work alongside all of our current skaters and those moving up from the new skater programme to encourage them to practice in the hopes that our team can grow stronger. As for keeping the team close knit, I think that comes from our training atmosphere. Lou and I are very open in terms of communication and encourage skaters to bring any issues to us in the hopes that everyone feels driven but not pushed, as being a Collider is always about having the best experience possible and taking away as much as you can from both training, scrimmage and game days!

H: I think that as a team we definitely drive ourselves forward and regardless of experience-level our training committee has always worked us hard to constantly improve our play. Being a B team, the roster is a lot more dynamic; newer skaters come up, more experienced skaters move to the A team, and it changes a lot. We do actively focus on learning how each other blocks/jams so can we gel on track but because we all train together, even when a skater does reach a certain level experience and makes that tough decision to bout exclusively with the A team, it doesn’t really feel like we’ve lost them because we'll be drilling/scrimming with them the week after anyways. Saying that we did have a very emotional locker-room-team-cry after a speech from last season’s stepping down Captains… but I think that just goes to show how much we bond as a team…or perhaps how emotionally unstable a bunch of us are…possibly both.

To find out more about the upcoming game (Saturday 22nd July) Check out the facebook event page here: Colliders vs Bairn and pals!