We've been a little remiss with our British Champs Northern Divisions updates since the middle of the season, so we're back a with a special catchup with our teams from each Tier, starting with Tier 4 North's York Minxters! 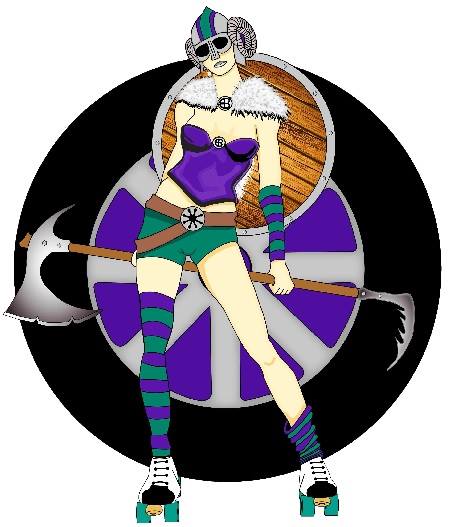 As the season is closing out, the Minxters will be playing their last bout of their Division of the Tier on July 29th. With three teams in the Division all with a single win (York, Grimsby and Durham Roller Derby), this bout will play an important part in deciding the final table ordering. Hosts Durham Roller Derby will play their fellow Durhamites, Durham City Rolling Angels, in the other decisive bout in the fixture (Wakey Wheeled Cats play Mansfield in the third bout... but Wakefield can't be knocked off the top spot according to the Champs table - and both teams will be promoted to Tier 3 regardless, as they have an unassailable grip on the top 2 places).

Minxters Captain Gem O'Cide is excited about the bout, "Our final Champs game on July 29th is a triple header. We take on our lovely friends Grimsby and its a game we have been looking forward to - it's d always hard to hit the ones you love.. and I think war paint will be caked on so we can ignore the smiles... as a team we have decided on a theme.. AND we don't do things by halves!".

And the rest of the team will be celebrating surviving their first ever tournament series the day after, July 30th, with a closed, mixed scrim for skaters from all the teams in Tier 4 North, as well as other "Tier 4 level" teams. The Minxters describe it as a "celebration of everything we've achieved competing in our first championships", "a super casual affair full of fun and welcoming newer skaters, refs and officials to mark the end of champs and the start of the next season". Any skaters of the right level who are interested in joining in should do so quickly, as the event is almost at capacity.

After recovering from this, the celebrations won't stop for York Minxters: a month later, August 20th, they'll be giving fans the chance to see the rising stars of the next season, as their last fresh meat intake hold their debut exhibition bout... as well as a "meet and greet" after the bout, for those interested in signing up themselves.

An open-subscription bout for all rookie skaters, this has proven so popular that skater tickets sold out in just 3 days - although there is a reserve list for those still interested. The team are still looking for a full officiating crew, so Referees and NSOs are welcomed! Gem O'Cide adds, "The theme is Disney vs Superhero* and we sold out much faster than we expected -  which we are super happy with; we're already planning part two! The current rostered skaters have a chance to bench and NSO to thank all the intake for all their hard work over the last 6 months. These are just our first planned off-season scrims.. there will be much more from the Minxters in the rest of 2017!"

*Given that Disney own Marvel now, this is something of an internal battle!