Readers of the blog will remember our coverage of Newcastle Roller Girls' first European Tournament, EuroClash, back in 2017. Newcastle's first WFTDA Recognised Tournament brought together teams across Europe for some high level action, and prefigured performances as far ahead as WFTDA Playoffs; as well as presenting a sneak peak at two of the National teams (Scotland and Ireland) as they worked towards the 3rd Roller Derby World Cup.

Whilst the ridiculously tournament-filled start of this year has delayed us, we're also going to be bringing you as much coverage as we can of the return of EuroClash this year... although, given one of the attendees this time, the tournament has already outgrown its name.

In this initial article, we're just going to introduce you to the competitors, and their current placements in the rankings.

Whilst 2018's edition is slightly smaller than 2017's - 9 attendees (6 returning from last time), rather than 11 - their geographic distribution is substantially wider.

Returning from 2017's inaugural event are:

Joining them to make up the full nine are: 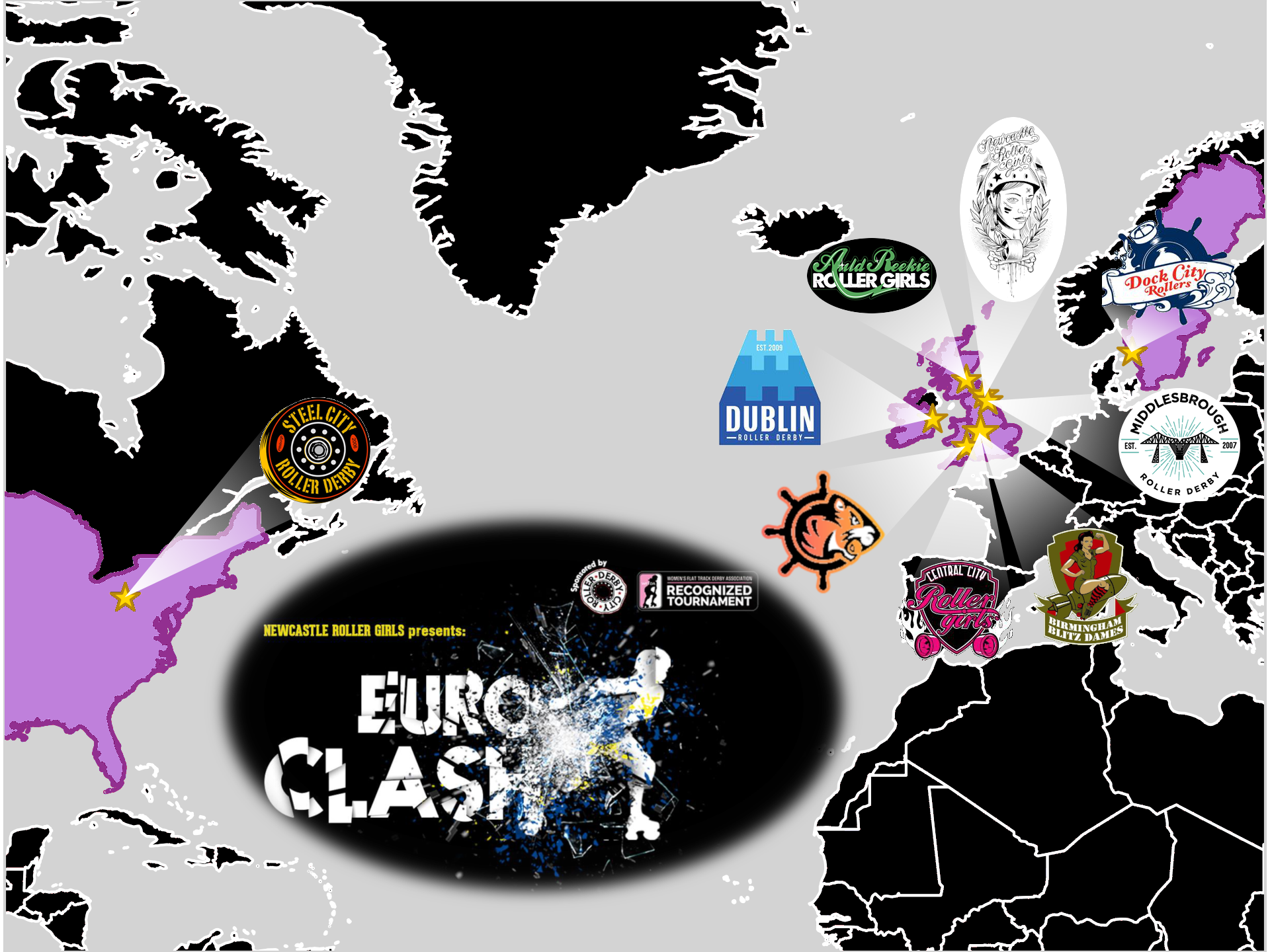 Last year, EuroClash served as the first step for several of the attending teams' campaigns to get into WFTDA Playoffs - Auld Reekie, Bear City, Paris and Dublin all gaining valuable ranking points from their attendance, as all bouts are WFTDA Sanctioned games. Whilst EuroClash itself is not arranged to provide a final ranking, or a tournament cup, we did analyse the tournament itself here. Our analysis was good enough to predict the results of Paris Rollergirls' subsequent two games against other attendees, so it's probably as good as any other attempt at rating the teams...

Since last year, the returning teams have played a lot of Roller Derby, with varying stories; so we can expect some changes in the matchups this time around. [We're using the FTS "WFTDA" ratings here, as not all the teams can be rated with the usually-more-accurate Europe ratings.]

As of the time of writing, the attending EuroClash 2018 teams span a 41 position zone within FTS's rankings - but a fairly closely rated one. (FTS's built in predictor tool expects only a 2:1 score ratio between the highest rated - Dublin - and lowest rated - Auld Reekie - teams if they played today.) We've also included, in parenthesis, the WFTDA Official ratings and rankings for the teams - despite the different ordering, the "range" in strengths is about the same for WFTDA's own ratings, perhaps slightly larger.

Auld Reekie and Middlesbrough both suffered ratings reductions against 2x4 Roller Derby during the latter's Jan-Feb tour of Europe, where the Argentine team outperformed expectations against almost everyone. The jury is out as to how much of this is due to 2x4's general under-ranking, and how much is due to over-ranking of the teams they played - in general, we'd expect better-than-ranking performances from both teams at EuroClash. Middlesbrough could potentially surprise the current #1 seeds, Dublin; the gap between their WFTDA ratings is entirely due to that loss to the under-ranked 2x4, and their European rating, by comparison, places them above the Irish team (and only just below Paris)! Similarly, Auld Reekie's European rating places them in the middle of the field, rather than at the bottom, although their trajectory is in the same direction - however, some of this is due to their bout against Leeds Roller Derby, who are almost certainly under-ranked at this point in the year.

Hosts Newcastle have also had difficult bouts, against EuroClash 2017 returnees Central City Roller Derby - given CCR's stronger-than-previous performance against other recent opponents, we consider this to be more of a reflection on CCR than Newcastle - and Leeds Roller Derby (who, again, are simply improving themselves, as they knit together as a team after their first year). We suspect Newcastle are somewhat underranked due to their choice of opponents, and as the hosts they'll be wanting to show that at EuroClash.

Remaining steady, Tiger Bay Brawlers have still had a pretty good year - and even their recent loss to Central City is not a bad sign, as their performance was near identical to that at EuroClash 2017; if CCR show signs of being back on the up, then this is actually good for the Cardiff team too. The recent transfer of Kid Block back to TBB from London can only improve their strength further - we expect strong performances from the team, beyond what their current rating implies.

Dublin Roller Derby have also had a pretty good 2017, continuing their upward trend in the FTS European ratings, and remaining steady in the WFTDA rating. Their current placement at the top of EuroClash 2018's rankings seems solid, barring improvements from Dock City, or Middlesbrough. This could all change this weekend, however, as Dublin play some competitive sanctioned games over in the USA at Southern Discomfort 2018.

Also remaining steady for the past year, Steel City Roller Derby - after losing around 100 rating points in 2016, the team had a very stable 2017, sticking around the 680-690 rating they still reside at entering EuroClash. A return to their 2016 high would make them easily the strongest team in the tournament, but we suspect their middle-table ranking is more likely, especially given the effects of trans-Atlantic travel.

Gothenburg's second league, Dock City Rollers, continued their generally upwards climb over 2017 (and 2016), and show no particular signs of stopping this progress in WFTDA bouts. They're one of two teams which could challenge expected #1, Dublin if they play against them. Looking at the more plentiful data in the European FTS rankings, they've suffered a "correction" to their ranking as a result of their performance in last year's Swedish national tournament, but their trend is still upward - if we believe the European values, however, they'll be better matched against Auld Reekie than Dublin's finest.

Representing Birmingham, we have both Birmingham Blitz Dames and Central City Roller Derby, and both seeing upwards movement in the rankings over the past year - Central City in the past month or two, and BBD earlier in 2017 - although the more detailed European ratings show signs of a correction in the Blitz Dames rating at the start of this year, albeit again against the probably-underranked Leeds Roller Derby.  We'll see if the Blitz Dames still have more rating gains to come in the WFTDA rating, as they play in the 2018 K Town Shakedown this weekend!

We'll be back with some more articles, and a guide to the schedule when its published, closer to the event...