Anyone who has been part of Roller Derby for a moderate time will have noticed the increasing trend for rebrands amongst the older leagues. When the Roller Derby revival was in its initial phase, many of the first leagues named themselves "Roller Girls" - almost certainly resonating with the post-90s echoes of "girl power" (and the RiotGirl punk movement, which played into initial conceptions of how Roller Derby culture would work). 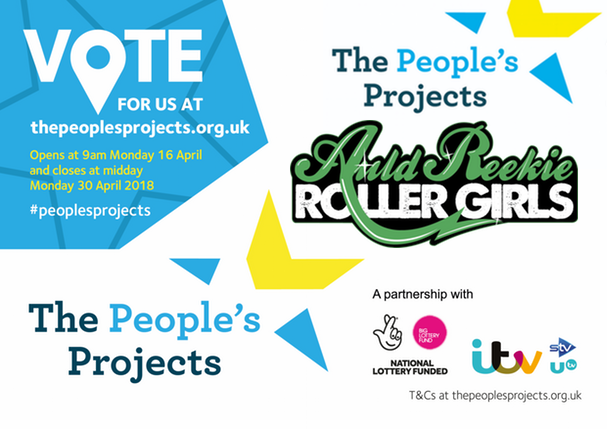 In a more modern era, as Roller Derby becomes ever more inclusive; both naturally (accepting more people means accepting more viewpoints), and intentionally (WFTDA's gender policy explicitly spelling out the inclusion of all kinds of women, as well as gender-expansive and non-binary people), that phrasing becomes increasingly uncomfortable for many leagues.

Auld Reekie Roller Girls were the second ever league to exist in Scotland, founded 10 years ago, back in 2008. After a long process of discussion, the league made the (near-unanimous) decision to move to the gender-neutral formulation in 2017... but were immediately hit by the disruption of their main venue for their entire existence, Meadowbank Stadium, preparing to close at the end of the year.

The new Auld Reekie Roller Derby rebrand is still moving ahead, in their symbolically significant decennial year; but, as with Central City Roller Derby [who were Rollergirls only a month ago], the rate at which a complete rebrand can happen is limited by realities of funding. Changing a name - and informing WFTDA and UKRDA that you're doing so - is fairly easy. Changing your logo, and extending that to your website, uniforms, banners, merchandise and so forth, is much harder, and costs significantly to complete. Without their main venue, and with no really equivalent alternatives available in the medium term, Auld Reekie's revenue streams are lower than they otherwise would have been, and so they've had to seek additional sources of funding.

This is one reason why Auld Reekie are applying for funding from "The People's Projects". This website is one of the ways in which the public can influence the distribution of National Lottery funds, in order to support locally deserving projects. Auld Reekie are asking for £21.7k - some of which will go towards the rebranding costs above. (This is actually the smallest requested amount of funding out of all the projects in their region.)

As importantly, however, the rest of the money will go towards improving accessibility and inclusion in Auld Reekie in other ways. As much as "Auld Reekie Roller Derby" is a statement of inclusion, acts are as important as words. Whilst Auld Reekie already work hard to provide an inclusive culture in terms of gender, there are other barriers in the sport that can be addressed. Anyone starting out in Roller Derby will know just how very expensive it is to acquire even the minimum set of kit, and these costs act as a different kind of exclusionary filter for the sport. So, the league also plan to spend funds on doubling their provision for loaner kits for potential new skaters, lowering the financial barriers to becoming involved in the sport.

Auld Reekie have already passed the shortlisting phase for People's Project funding for their region, and simply need enough votes relative to the 4 other shortlisted projects in order to achieve it.

Voting is open on The People's Project Funding for Auld Reekie's project until the 30th (next Monday). You can vote by simply following this link: https://www.thepeoplesprojects.org.uk/projects/view/rebrand-recruitment-and-celebration

[We hope to also bring you a follow-up article on the new Auld Reekie Roller Derby brand, later in the year!]