Since our first article on Short Track Roller Derby, back in 2018, the new ruleset has continued to spread, in almost all the places in the world where Roller Derby is played. As such, we thought we’d follow up, just 4 months later, with some of the exciting developments in Short Track worldwide.

Firstly, as readers of What A Bout magazine will already know, Short Track Roller Derby has spread further-and-wider than we could have hoped: to Russia, and Dubai, in the United Arab Emirates, already. You should read the full article in WAB Issue 3 for full details, but look out for several Short Track tournaments in Moscow, and other Russian cities later in the year. Dubai’s interest in Short Track has also led to bigger things which we’ll get to later in this article.

Short Track is continuing to enable more teams to play derby, even now.

In Poland, Gdańsk’s Chrome Sirens are playing their first ever public game, thanks to Short Track rules enabling them to put together two competitive teams (and use more accessible venues). This double-header event will be coming to the city in the middle of next month - March 16th!

In the Americas, Short Track Derby is also taking off: ruleset creators Rolla Skate Club having provided initial impetus with a comprehensive series of trial sessions across Canada and the North-west of the USA. In Latin America, meanwhile, there is interest in Buenos Aires, Argentina, in exploring the ruleset, as it solves several of the challenges of the many teams in the city.

In the USA, though, public bouts have already started, with the ruleset enabling teams to play their first games in years!

For Illinois Valley Vixens Roller Derby, who played their first public bout for 3 years thanks to Short Track back in February, the ruleset has been a revelation. Whilst some venue issues meant that they had to modify the track slightly, the bout was a complete success - despite only using word of mouth and social media for advertising, they managed to fill all the available seating. Speaking for the league, Lemon Squeezer told us : “We now know that a smaller track definitely does not mean less exciting or intense, quite the opposite! I can't remember a time I have heard a crowd this engaged before and the feedback from spectators was that they are looking forward to the next one and bringing friends. We also had several former skaters come to check it out that are now interested in coming back.”. I.M.GROOT added, “The fact that all players have to both jam and block really takes you out of your comfort zone. It pushes you to use all the skills you have learned, not just the ones you prefer. Short Track has the ability to really push skaters to be stronger, better and more adaptable in game play.”

In an even more striking mode, the USA has also brought us the first ever “Short Track” league: Pittsburgh Short Track Roller Derby, founded by a group of skaters who retired from “competitive” Roller Derby, but still wanted to play a friendlier version of the sport. Their league aim, as expressed on their website and Facebook page, “We are a group of friends who wanted to create a safe, stress free environment to get together and skate. Community over competition.” encapsulates the entire point of Short Track as a ruleset and community. (You can find out more about them on social media and their website.)

Further in the future, there’s also exciting news of potentially the first ever international Short Track Roller Derby Tournament.  The newly created UAE All-Stars, the United Arab Emirates’ official travel team, are exploding onto the scene, and one of their first public plans is to play Short Track Derby! Formed of skaters from Dubai Roller Derby and Abu Dhabi Roller Derby, the team plan to play all kinds of Derby, but Short Track is definitely a solid component of their goals. [We have more about UAE All-Stars themselves in another new article here, which we’re going to publish soon - and their first ever public game will be this weekend, 2nd March, in Hong Kong, as part of the Pan-Asian Spring Rollers]. 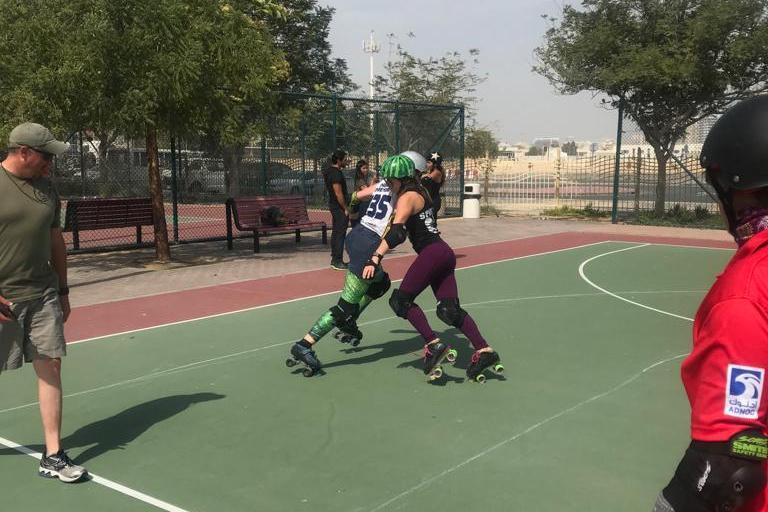 Thanks to the support of GO-GO Gent Roller Derby, who had been investigating hosting an experimental Short Track clinic for several months, UAE All-Stars will be travelling to Belgium on the 1st and 2nd of June. The first day will be a Short Track Roller Derby training workshop, allowing the experienced skaters from Dubai’s testing of the rules (and potentially other skaters who’ve tried Short Track from the rest of Europe) to explain and demonstrate the potential of the ruleset to attendees.   The second day will be a tournament event: the structure of which is still under development. Teams are welcome to participate from across Europe, and we know that there’s been interest from several regions already.

Even further in the future, there’s the possibility of Short Track bootcamps in other parts of Europe, including the UK, and other plans afoot about which we can’t speak at this time. Stay tuned for further updates as they occur!