Torneo Patagonia Rebelde: The Southernmost Derby on the Planet for 2019

The most exciting event in Roller Derby this weekend is also the most "extreme" in many ways.

For the second time, the roller derby leagues of Ushuaia, Tierra del Fuego - Bandera Negra and Piratas del Beagle - are joining forces to host the southernmost Roller Derby tournament in the world,

(Ushuaia is at around 55 degrees south, further south than any part of Africa or Australia.) Whilst the first edition of the tournament took teams from across Argentina, this second edition is already on a more international scale.

Both the WFTDA-gender and MRDA-gender tiers of the tournament will be contested by Seattle's Grunge City Rollers (Seattle's open-gender league). 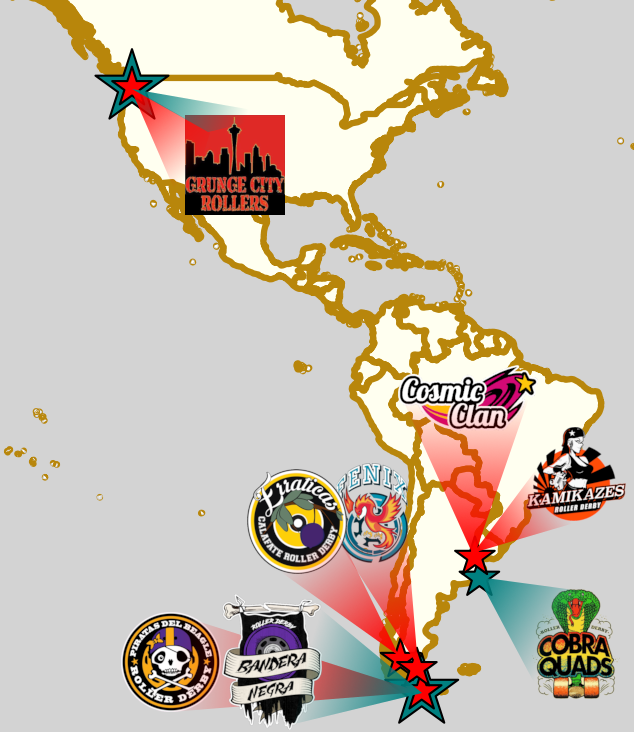 The WFTDA-tier will also feature, in addition to the hosts, Piratas del Beagle:

Meanwhile, the MRDA-tier will feature, in addition to hosts, Bandera Negra:

Most of these teams haven't had a very active game schedule; which is really why this Tournament exists, to be fair. CosmicClan have played a game this season (a narrow loss to 2x4's Team C), but for most of the others, these will be their first public games of the season (and, for some of them, perhaps for the year). For Cruz del Sur, of course, this will be their first games, ever!

As a result, however, it's hard to predict how the tournament will go!

5 Segundos (link to Facebook), one of Argentina's more prolific Roller Derby news services, has been ramping up coverage of this event over the last few weeks, and we'd recommend you follow them for up to date info.

The tournament will run over three days, from the 19th to the 21st of April, making full use of the Easter weekend period. You can see all the results as they come in on the Flat Track Stats tournament page.