Beijing's Dragon Bootcamp - the start of an annual tradition!

Roller Derby in China, and Asia in general (outside of Japan) has always been a widely dispersed community, with initiatives like the Pan-Asian Spring Rollers helping to tie the region together, and share resources sustainably. However, there've been relatively few big "all-day all-round" bootcamps in the region, and, in particular, little for the officiating side of the sport.

So, it was particularly exciting to hear that Beijing Roller Derby was hosting a 1-day multi-discipline bootcamp over the Dragon Boat Festival Weekend (8 June) this year. Skaters from all three Chinese-region leagues - Beijing, Shanghai and Hong Kong - were present, for the all day event.

We talked to a few of the attendees for feedback on the event, which included everything from Skate maintenance and "what is Roller Derby", all the way through drills, communication skills, and a final modified-Short Track rules scrimmage.

Read on for more: 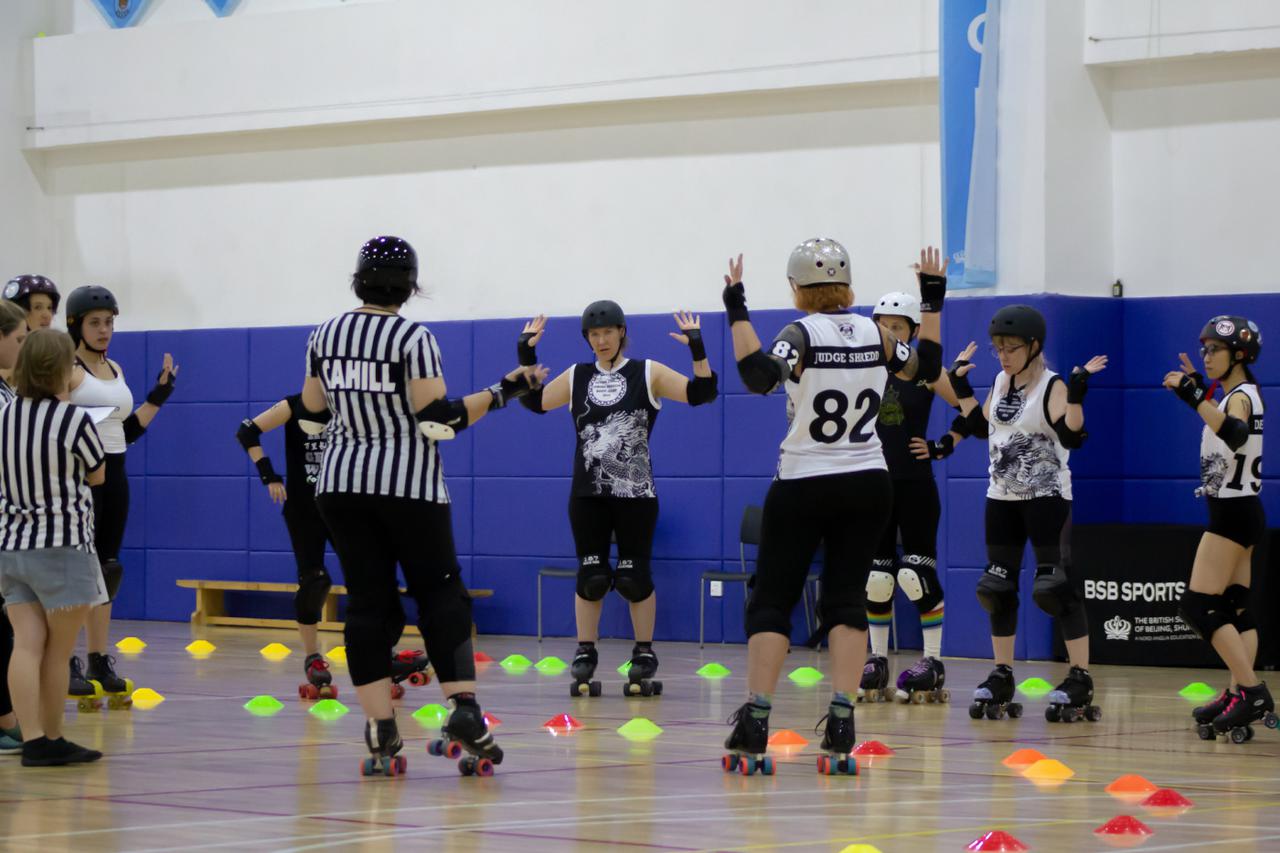 Reffeweizen (Cahill) and Judge Shredd leading a session at the bootcamp (Photo: Michel)

Doc McStuff'ems attended the Beijing Dragon bootcamp from Shanghai, as a mins-passed skater.

As a fresh meat graduate from the Shanghai Rollers, the Beijing boot camp solidified my new-found love for the sport. The classroom work lead by Reffeweizen was awesome. It got us into the right frame of mind and helped me understand how caring and supportive the Officials are. They love the game just as much as the players and work hard to feel the keep the sport safe, fair, and fun. And you just don’t mess with Officials for those reasons.

I loved learning from Judge Shredd [in the on-track skills sessions] and practicing with players from the Beijing Roller Derby team. Having new faces to practice elements of game play only makes you and your team better. Everyone is there to learn and essentially want the same thing, to be ready for a bout.

Reffeweizen was one of the main session leaders - as one of the few experienced on-skates officials in China, she ran both the Officiating clinic , and the initial "orientation" session for all attendees.

I spent most of the day in the classroom. There aren't too many officials in China or Asia; I only know of 3 others in China/Hong Kong.

I ended up working with someone from Shanghai (Malika) who wants to be a dedicated official! And some fresh meat who couldn't participate in contact drills came in and learned more about this side of things. It was really exciting to see officiating grow!

Michael Tsai-Jensen, who was attending with Beijing themselves, also noted that he found the rules-focused clinic session really useful.

I thought the Derby bootcamp was a great way for a newbie like myself to really get immersed into the sport for a day. I've attended a few practices but the way it was split into classroom theory and actual practice did so much for my learning. 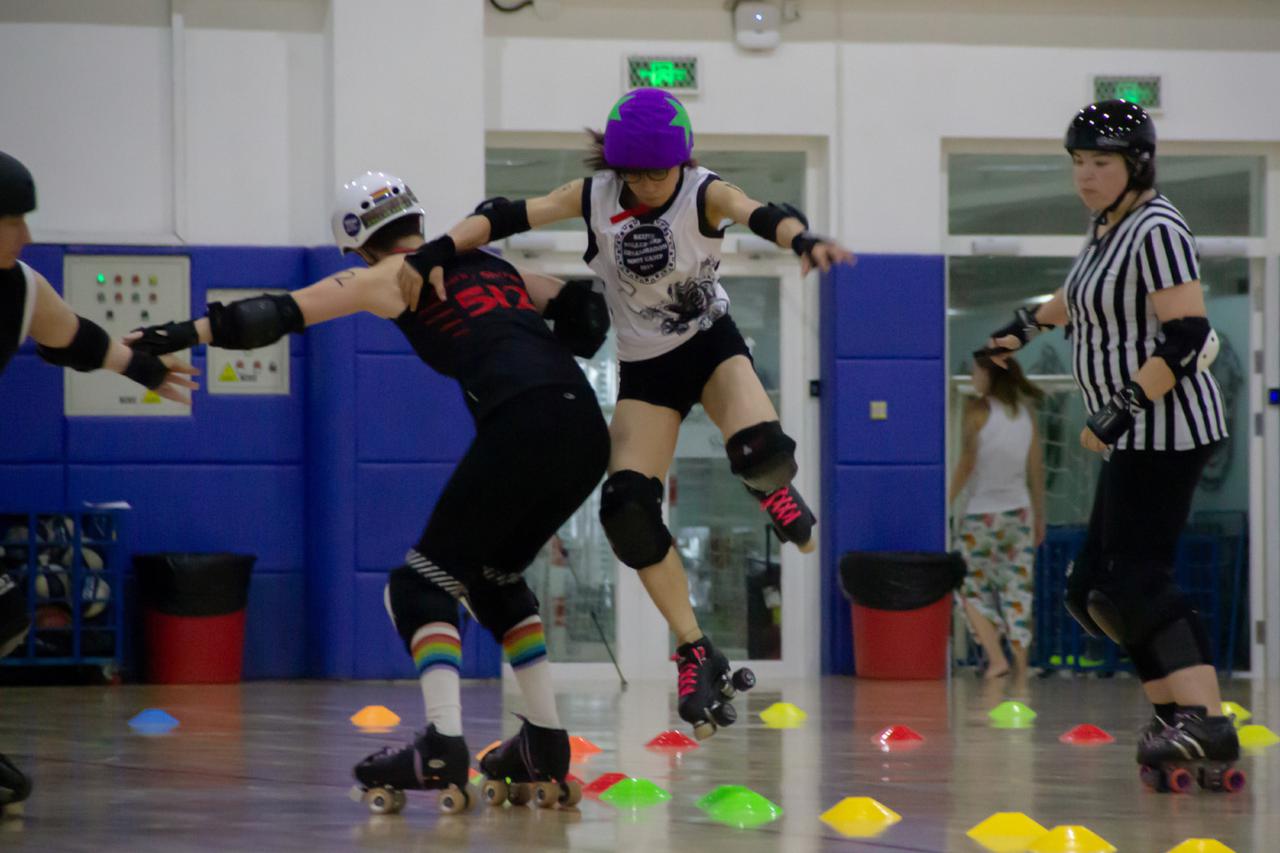 The original plan for the Bootcamp was to end it with a mini-tournament, using Sur5al rules to allow multiple teams to play against each other in a short space of time. Due to changes in attendance, this was changed to a modified game format based on Rolla Skate Club's Short Track Roller Derby rules, as Reffeweizen explains:

We ended up tweaking some of the Short Track rules to accommodate more WFTDA-style officiating for the clinic graduates, since it's rare to get a chance to work on that [in the region].

This modified ruleset resulted in an exciting, and close-matched final scrimmage, as Doc McStuff'ems retells:

As the day wore on, I was getting very nervous about the possibility of game play. Obviously this bootcamp would be a far better way to get some exposure to the real deal, rather than just jumping straight into a game.

So, when the scrimmage started I was so pumped to play with the people I just spent the day sweating with. We were tired, but so many amazing chemicals flood into you the second that jam whistle blows.

And when it was over, it all made sense. This days spent at the first Beijing boot camp is what derby is all about: a bunch of badass people, willing to teach, learn, sweat, try, fall, get up, and literally stick together to play a sport that makes everyone feel proud as hell to be a part of it. From the officials to the fans, derby is instant family. 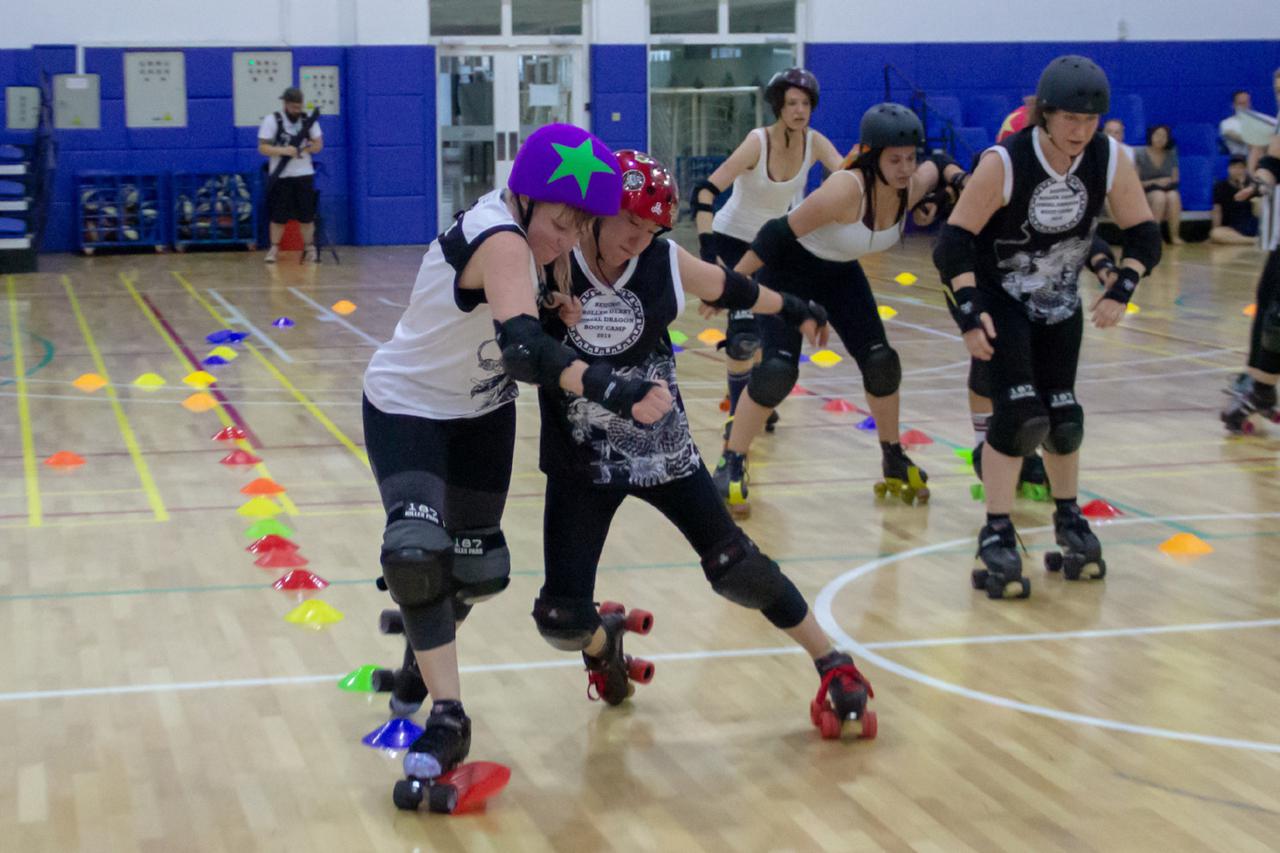 We ended up doing 2 periods of 15 jams so that people could rotate through jammer evenly. After 30 jams, the score was tied 66-66, meaning that we had to hold a tie-breaker jam, ending with 66 to 69!

Overall, the event was a big success, and Beijing are already interested in repeating the experience, benefiting from everything they learned this time around.

We're looking forward to having another bootcamp with a scrimmage/tournament at the end next year. It's great knowing that Short Track is an easily teachable, usable format that we can consider!