This year was a particularly important point in the tournament's history, as two borderless nations - Team Indigenous Rising (link to Facebook), and the new Jewish Roller Derby - competed in the tournament, and even played each other. (In fact, even the styling of the series of games as a true, all-day, tournament was a change this year, as previously there had not been enough competitors to realise this.)

Speaking for Team Indigenous, Jumpy McGee explained the importance of this to both teams:

Team Indigenous is extremely grateful to have this platform to bring our teams together and highlight that not all humans are defined by borders or citizenship. There are centuries of displacement, violence, and oppression that have occurred causing people indigenous to their homeland to create home elsewhere. We believe it was critical then to create a space where players identifying as a member of a nation had a place to belong. And when WE talk about nation, we're talking about nation in the sense of a collection of humans who have the same cultures, beliefs, languages and traditions who cannot be contained or defined by borders.

The 2019 Nations tournament was run as an efficient double-elimination bracket, with seedings voted on by the competing teams. This means that each team could lose once in the tournament - that loss knocking them out of the "winners" bracket, and into a sudden-death bracket against other teams with a single loss. The eventual survivor of that sudden death bracket, having proven themselves the best of the teams, other than sole unbeaten team, gets to play in the final against that undefeated remainder. In this case, for time, all games were single period WFTDA-rules bouts, except for the final, run as a full-length WFTDA-rules game.

As well as the two borderless nations, there were also three Asian nations represented: Team Philippines, Team Korea, and Team "Japan-fam" (so named because they did not have a tryout and offered this opportunity to all skaters of Japanese heritage). This is also an important aspect of the event, and has been since it began, with Philippines and Korea founding members in 2017. 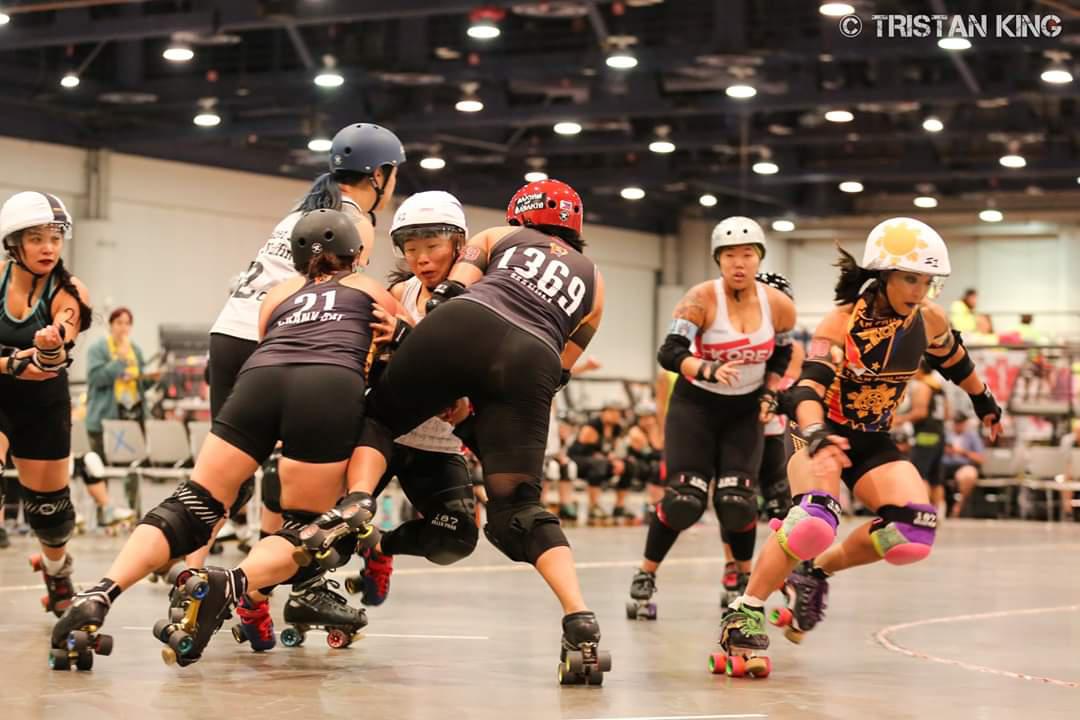 As ShortStop noted for Korea, in particular:

As a small nation, with relatively low representation in Roller Derby, [we] submitted an initial roster that included 8 Koreans, two skaters from OH Roller Derby Team (the only roller derby league in South Korea), and skaters from China, Vietnam, Thailand and Hong Kong. All of our non-Korean Asians are currently involved in building their own nations teams, and we thought it was a wonderful way to include them as start to gather their own teams.

For Philippines' Electric PIRANHA, it's an equally strong, and personally important opportunity:

I have played sports throughout my whole life and have been playing roller derby now for four years. I never once in my life thought I would be able to represent a national team, a team that represents my heritage and culture. I had the opportunity to represent Team Philippines at the World Cup in Manchester and just recently in the Nations Tournament at RollerCon. Words cannot describe the feeling I get skating for Team Philippines. I am surrounded by smart, beautiful, athletic Filipinas. When we are together, there is an extraordinary and undeniable bond we have, like we've been skating together as a team for years when we only have had the chance to skate together a handful of times. We represent a country that has gone through colonization, war, and the fight for independence. I skate for my cultural heritage and I skate for my family. #pamilypirst #poweredbylumpia #poweredbyrice

Even for Japan, where there has been derby in some form for more than a decade, visibility is low, as we've discussed before on this blog. Kris Rago, for Japan-fam noted to us that this was a factor in their participation here:

Japan Fam was unique in the sense that roller derby is present in Japan and that some of our skaters from both Japan and Hawaii were able to fly over and join our U.S. Japanese skaters. It was really wonderful to be able to come together and work together to represent our heritage and do amazing things on the track. My hope is more opportunities like this will help to strengthen the relationship between our U.S. Japanese skaters and skaters and leagues in Japan.

The first round of competition saw a strong performance from #4 seed Team Indigenous, and a tight victory for #3 Korea over #6 Philippines:

The second round saw, in the winner's bracket, Korea proceed over #2 seed Jewish Roller Derby, and #1 seed Canada knock down into the lower bracket Team Indigenous:

whilst in the loser's bracket, Team Indigenous knocked out Philippines: 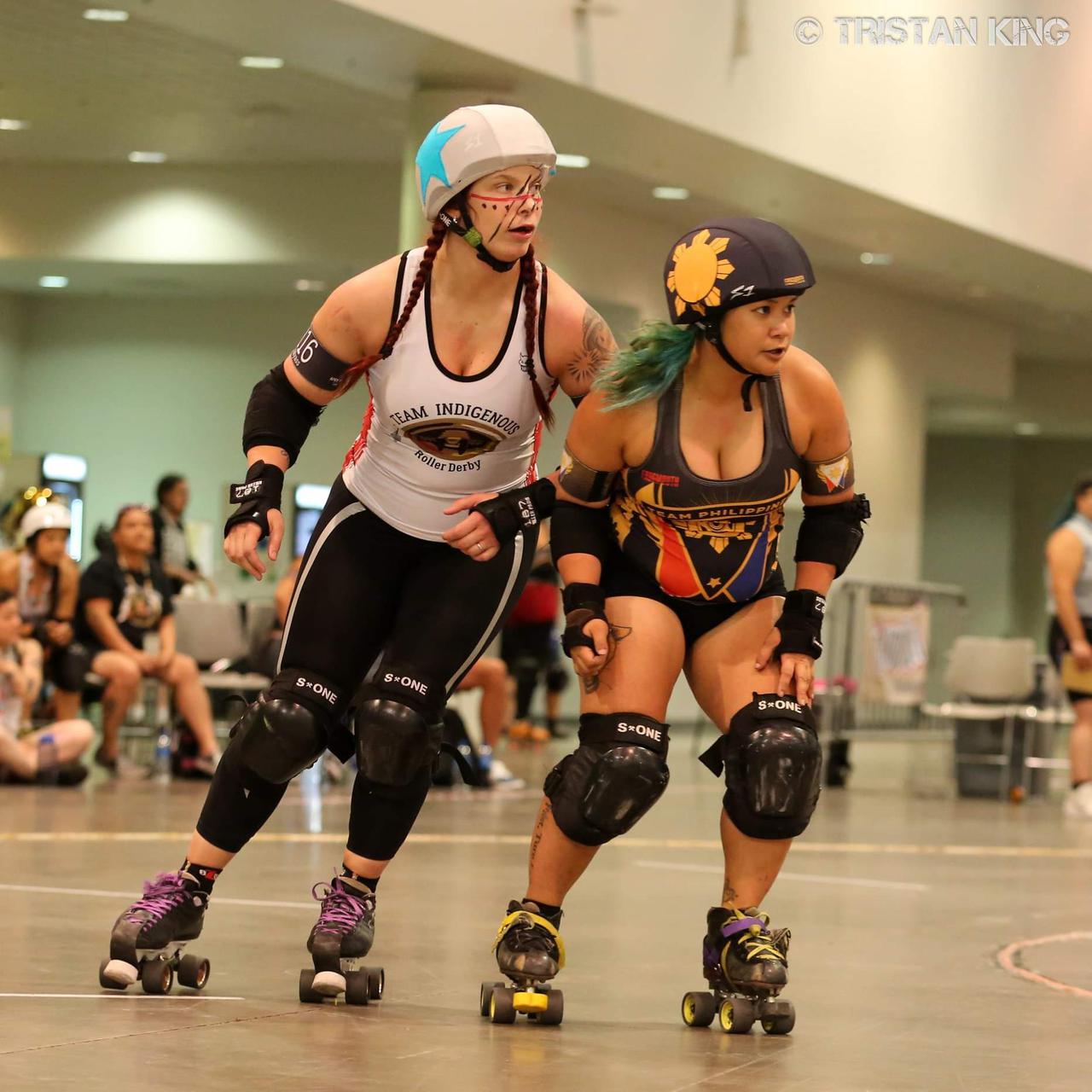 In the penultimate rounds, in the loser's bracket, Jewish Roller Derby retained their place, knocking out Japan-fam in a strong performance; whilst in the winner's bracket, Canada overwhelmed Korea:

Rather than dropping down to the loser's bracket for the semi-final as their the next game, Korea elected to forfeit; as ShortStop tells us, "As the day progressed, injuries, fatigue, and scheduling conflicts (RollerCon duties, challenges and other activities) took a toll on our already small numbers. We were thrilled to have the opportunity to be involved in the tournament, but due to unforeseen factors, it was not in our skater's best interest to continue. For safety reasons Team Korea and friends made the difficult decision to forfeit our semi final game."

This meant that the final loser's bracket game, between Indigenous and Jewish Roller Derby, would determine who would play for the championship against the undefeated Canada. Given the importance of visibility to both teams, the game had a certain special tone to it, as Jewish Roller Derby's Jodi Bon Jodi recalls:

Jewish Roller Derby was honored to play Team Indigenous in that final elimination game. Before the game, both teams were joking about how we didn't care who won, we were all just so grateful to play against another borderless nation. The game ended in hugs rather than high fives, which I think really captured the spirit of what we are doing.

After a tight game, Team Indigenous took the victory... but were unable to defeat Canada in their resulting rematch.

The larger, more formal Nations Tournament was a success, judged by the audiences attending, and the feelings of those on teams we talked to. As its first year as a bigger component of Rollercon, there was room for improvement on scheduling (several teams found that having all the games on one day made things more difficult; both more physically draining, and also limiting the length of each game), but we are unsure as to how this will be accommodated in the complex mix of fixtures which make up Rollercon. Following the current trend, we are looking forward to seeing potentially even more teams representing at Rollercon2020's edition of the event, bringing more visibility to nations, and peoples, who have been under-represented in derby as a whole.

You can next see two of the teams represented here, Team Indigenous Roller Derby & Jewish Roller Derby, participating in a "Borderless Nations" showcase bout as part of the WFTDA Championships in Montreal, Canada. This historic bout will be held on November 16th, with the first whistle at 11:30.

As Jumpy McGee put it better than we can:

The beautiful thing about Team Indigenous and Jewish Roller Derby coming together on this international stage is the ability to increase community education and awareness about issues facing these typically marginalized groups. There is also the ability to spotlight some incredible athletes who have so much talent, but given the scope and nature of our sport currently, may not ever have the ability to demonstrate their skill at this highest level. We also open up the conversations with our community around how we understand marginalized groups within our sport and keep the conversations going on how our roller derby community can provide better support for elevating these groups.

And in a period where various kinds of marginalisation and division are under the spotlight in derby, we need this more than ever.