Most of the National Tournaments we cover have been running for many years, but as Roller derby expands across the world, we see newer tournaments establishing themselves in additional Nations. One such newer tournament is the Austrian Championship, which enters its third year on the 30th of November.

We talked to 2019 hosts, the Fearless Bruisers of Roller Derby Innsbruck about the tournament, and how it is already growing.

Austria has had Roller Derby for some time, with Vienna Roller Derby having been playing since 2011, including internationally. However, for much of that time, they were literally the only league in the country, with most of their bouts played across the borders in Switzerland or Germany (or further afield in Europe). It was only in 2015 that additional teams were founded, in Linz, followed in 2017 by Graz and Innsbruck, and most recently in Salzburg in 2018. In 2020, we expect to see even more leagues form, as the trend of Roller Derby in Central and Eastern Europe continues to point upward.

The first two Austrian Championships featured all of these teams except Salzburg's Knockouts, who were not yet able to compete at the time. This time around, however, all 5 Austrian leagues are sending teams, to compete in what will be a two-day round-robin tournament.

It seems likely that Vienna Roller Derby, who have a 2 year win-streak for the Championship, will retain it in 2019 as well; it will be a significant event for Austrian Roller Derby when the other teams have sufficient experience to challenge Vienna for the win. Indeed, in the first Austrian Nationals in 2017, the main part of the contest was to decide which team would play Vienna, so we've already moved forward significantly with the equally-weighted round robin.

Similarly, Vienna was the only team able to host the first Nationals, with Linz' Steelcity hosting the 2018 edition. As the hosting moves to the Fearless Bruisers in 2019, the development of league experience with time is recapitulated; maybe the 2021 edition will be hosted by Salzburg themselves? 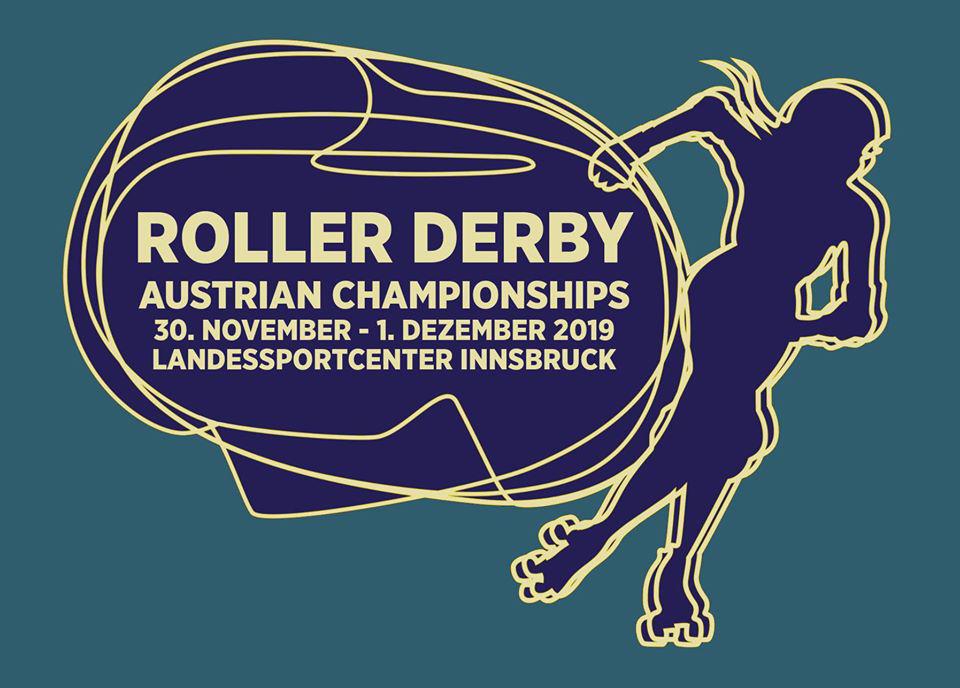 Karo, speaking for the Bruisers, told us that the league were currently working flat out on the tournament, their first ever two-day event:

"We're very happy to host the 3rd edition of the ÖM [Österreichische Meister*innenschaft] in our hometown and feel lucky that we managed to find enough officials, announcers, helping hands etc. to manage this. Luckily, we were also able to raise some public funding for the tournament which makes everything a lot easier. Nonetheless there are so many aspects to think about that we are all pretty busy in our free time right now - but this is nothing new for everyone who is into Roller Derby I guess 😉 still, we have never hosted a 2-days tournament and are very much looking forward to having a full Roller Derby weekend at home.

Something new: we’ll have a halftime show! Our recently founded cheerleaders will set up something for us"

The tournament will be run with the main component a round-robin with 40 minute games (2×20 minute periods) - with 5 teams, that will require 10 games in total (spread across the weekend). Whilst Vienna are the likely winners, competition for the other spots will be close; we predict that the hosts are the most likely to take second, but third/fourth is impossible to call.

However, excitingly, this year, the Nationals will also feature an additional bout at the end of the first day, as the Austrian National Team play Team Italy for the first time, in a full Regulation-length game!

The 3rd Austrian National Championship will be hosted at the Landessportcenter Tirol (10A Olympia Straße) in Innsbruck, from the 30th of November. Doors open at 0930 both days.