Danish Champs - All Sevens and...

As Roller Derby grows across a country, inevitably people start thinking about having a National Tournament (usually around the time they think about needing a National Governing Body). So, whilst some Nationals - in, say Mexico or Sweden - have been running for a very long time - there's always new National tournaments forming.

On the 1st of February, Denmark held its first National Tournament in 4 years, taking the unusual (worldwide) step of using the Roller Derby Sevens ruleset. This tournament was the result of both conception and huge commitment by one person - Aalborg Roller Derby 's Möxie Crüel, so we caught up with her to discuss the genesis of the tournament, it's aims and plans for the future. 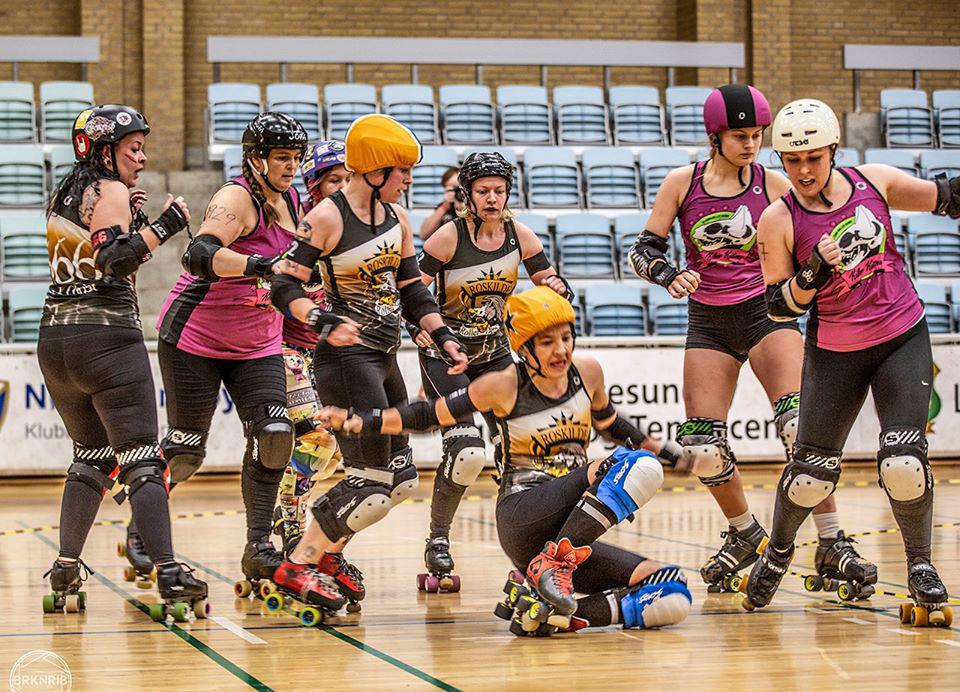 Roskilde versus O-Town (Odense) in the DM, first game [Photo by BrknRib Photo and Artwork]

How long have you been planning this, and how hard was it to get all the leagues involved?

I pitched the idea of a Danish Championship to Aalborg Roller Derby's board in February 2019. I said if they would let me do it I would take care of almost all the planning. Fortunately they said yes. The next step was to contact the Sportskomitte (1 representative of every league in Denmark is in this committee) to find a date that would suit all of the leagues.

Every league had to bring 1-5 volunteers to make the day run smoothly. The plan was to pair volunteers up with someone from another league, in order to strengthen the relationships between the leagues. Volunteers were assigned to Entrance/Tickets and to Track Repair, the other roles were handled by more volunteers from Aalborg Roller Derby.

So, I want to talk a bit more about this. Building connections between leagues in the community is also something we've been working on in Scotland - how well did this work? Did you also pair up Officials ?

We believe that it worked really well. We consider the connection between the leagues to be strong in general; it might be due to the fact that we live in such a small country.

In Denmark we have several skaters who have transferred to another league because of changes in their personal life. For example, KINGO is a transfer from O-Town Roller Derby [to Aalborg] and the fact that her connection to her old league is so strong has made our connection to O-Town stronger. We invite each other to scrimmages in the leagues.

There’s also the fact that a lot of the leagues are small so in order to play a good scrimmage we need to help our selves and each other by joining scrimmages around the country.

At the previous Danish Championship in 2015, only 3 leagues had the numbers to participate so the smaller leagues joined their forces and formed the mix team Midtdanmarks Tæver (Bitches of Central Denmark). The team primarily consists of skaters from O-Town and Roskilde and a few other skaters from other leagues. Unfortunately they were not able to set a full roster and couldn’t participate in the Championship, but today the team has grown and they are playing games every now and then.

Besides participating in Sevens tournaments, and playing games at double and triple headers around the country we have for two years now hosted a Christmas themed game day where one of the games had a pickup team. The first year it was a Sevens game with 2 OTA pickup teams, and last year it was a roster of 18 players from Aalborg, Aarhus, Roskilde and O-Town that played against Copenhagen B-team.

The days where the Danish leagues get together and play either against each other or together in one team are just so much fun. The whole day has this thick air filled with love and friendships. 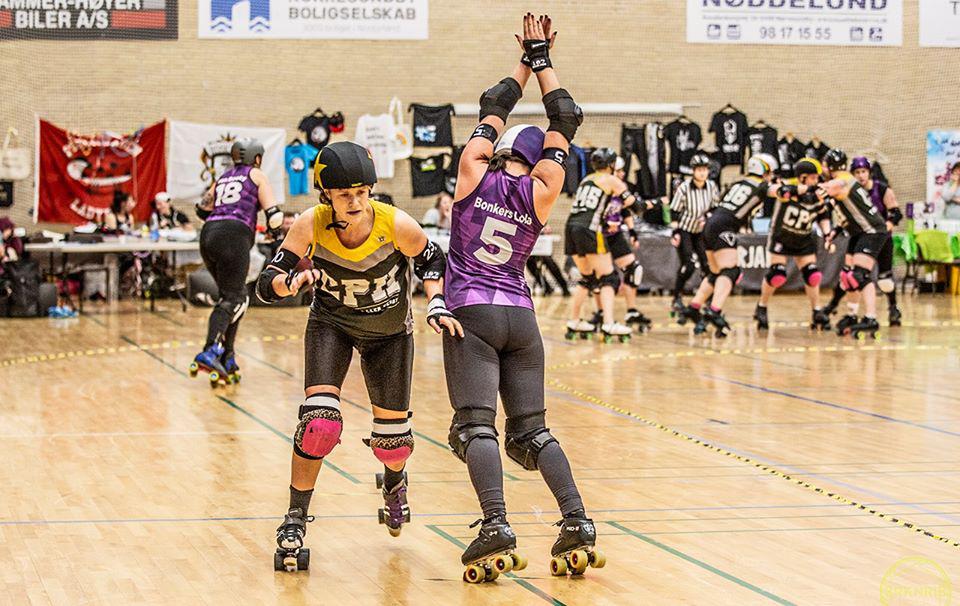 Aalborg versus Copenhagen in the DM, Final game [Photo by BrknRib Photo and Artwork]

Why Roller Derby Sevens? (And would you keep Sevens for next time?)

We are a small country, and only 3 out of our 6 leagues have enough players for the roster of a regular game.

By doing it Sevens style, all leagues could join without having to find guest players, and thereby get the whole team experience. I have had feedback from some of the smaller leagues that really enjoyed this set up because they could be a team.

Two of the Leagues on Sjælland (Sealand - Roskilde & Ladybugs) have hosted Sevens games before, and it was from there I got the idea that a Danish Championship as a Sevens tournament would be able to include all the leagues in Denmark.

Another advantage of doing it Sevens style was that we could do it in one day, making room for a social dinner and afterparty in the evening.

Aalborg Roller derby also invited all Danish skaters and officials to a Bootcamp the next day. We came up with the idea because we wanted to include even more of the Derby people than just the ones getting to play or officiate the championship and it was a huge success with a lot of participants.

We talked to Raven, representing Roskilde Roller Derby to get their impression of the event, which was very positive.

As a whole, the event was really well run (Aalborg Combat Bullies are known to run amazing roller derby events), and for smaller teams (Roskilde included) it was great it was held in Sevens format. This way we had a chance to participate, without having to loan skaters from other leagues. We could train, build up to the event, and it made us feel even more like a team, to be preparing for it.

It was also so great to meet old and new derby people from all over Denmark. It’s a small country, so almost everyone knows each other in some way, and the Derby spirit and love was all around

The only thing [Roskilde] talked about we that we would change, was the seeding [which was based on FTS ratings]. Because we are only 7-9 skaters in some of the small leagues, we don’t get to play full games as a team [so] we will be in the bottom of the rankings, but it doesn’t reflect how well we play in a Sevens format.

All in all we (in Roskilde) had an amazing time, great games, lots of fun and derby love!

What does it mean to Denmark, or you, or Aalborg, to have their own National Championships?

For is it means a lot to have the National Championship. As the hosts we had to come together and work hard to set this up. Fortunately we could use our experiences from hosting our annual tournament The Northern Takedown (TNT) so we only had to adjust our planning to fit into the 7’s format and then follow our work instructions from TNT.

To play in the championship gave us a great goal to aim for, which was to bring home the gold. We worked really hard at every practice and everyone committed 100% to make this happen. In January we had the pleasure of getting coached by Miracle Whips and we evolved our game by adding what we had just learned to our existing mindset and strategies. Everything came together and we reached our main goal.

Aalborg:
We have had a lot of PR on this including local radio host joining our practice. We hope that by hosting the championship it will make the citizens of Aalborg more aware of what roller derby can do for them. They can either get a fun action packed day by watching our games or get the full experience of hard physical work, challenge their minds with the strategies, have the greatest friends and the feeling of community if they join our league.

It was great. We had a lot of officials, skaters volunteers, medics and vendors and we had 100+ spectators. There where quite a few spectators that we have not seen before at all, and also some attendees we know but this was first time they came to see a game.

Did you get much media interest?

As previously mentioned we had some local radio hosts joining our practice and one of our skaters afterwards joined the radio show.

Some articles were written and two days after the championship we got contacted by a television show.

We talked about streaming but unfortunately we didn’t have the number of volunteers to make it happen. 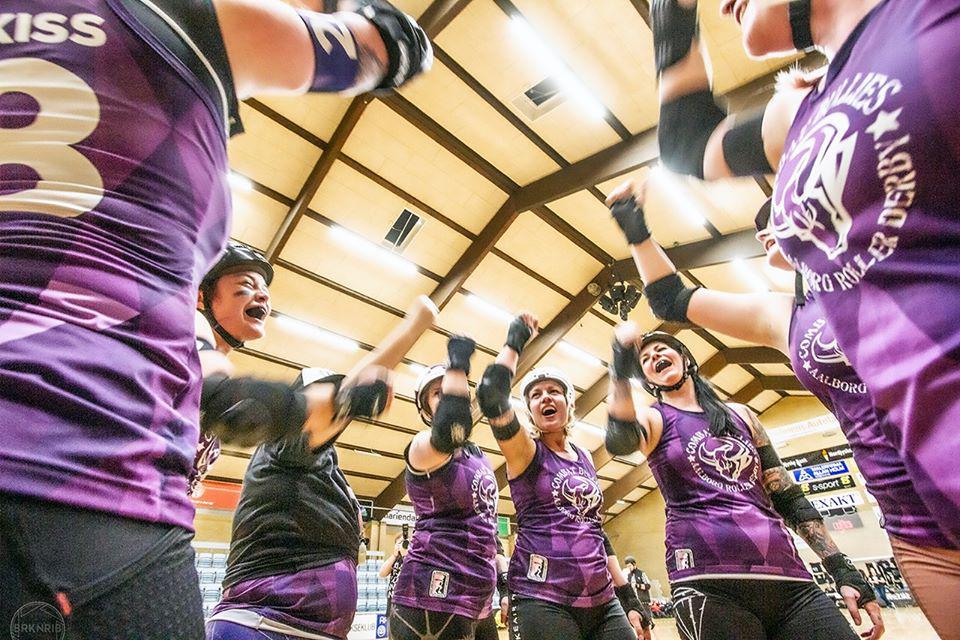 The results for the main competition at the Danish Nationals ("Danmarksmesterskaberne") were:

The OTA results were:

Statistical analysis of the main tournament results suggests that this was a pretty fair tournament: estimated strengths of the competitors are good predictors of all but one game's winner. The one game which is hard to call statistically is also the closest game in the tournament - the 3rd Place between Aarhus and Roskilde - as the two teams are estimated to be a near tie in strength.

We hope that the Danish Championships happen again in 2020, and continue to showcase Danish community (and Roller Derby Sevens) to all comers!