This year's EuroClash is just as international as previous years, but is running as a 1 day event at Newcastle's famous Walker Activity Dome. 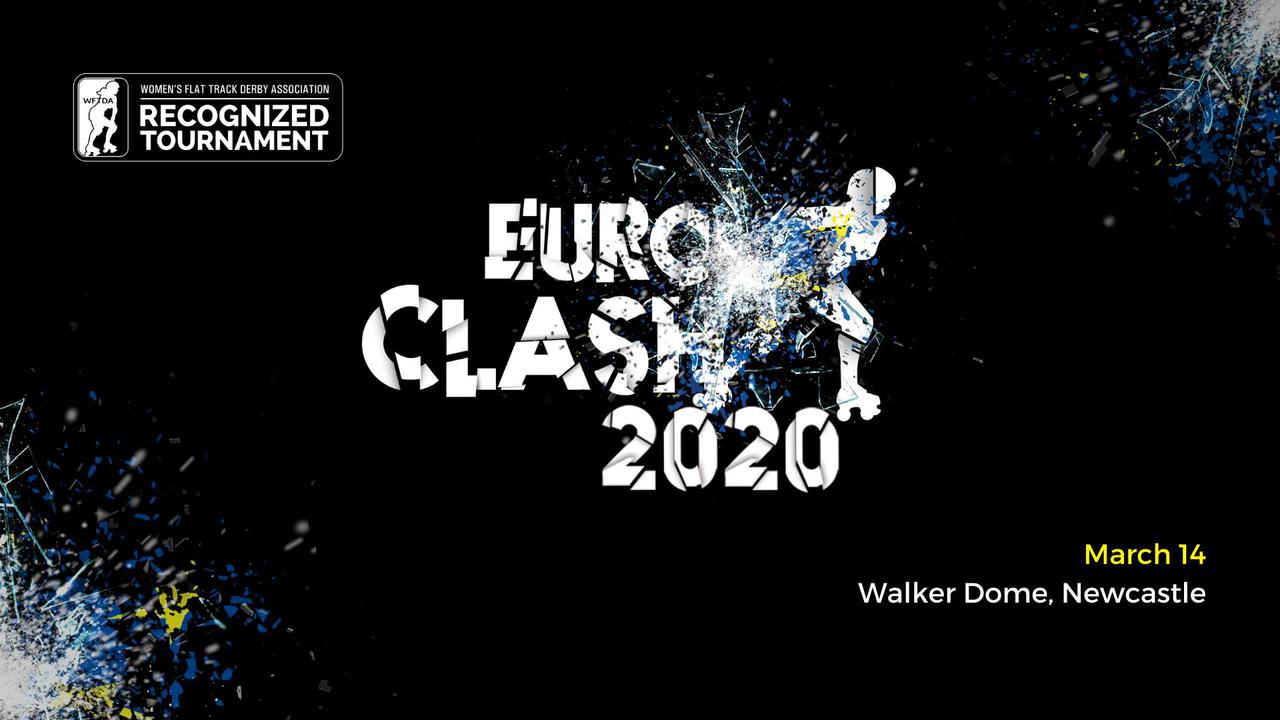 With 5 teams attending, and 5 games in total, this is a tournament in the looser sense of "a number of games in one place"; no overall winner will be decided. As with most WFTDA-Recognised tournaments, the point is to make it easier for all the teams to achieve their WFTDA Sanctioned Games quota by having several at once (and also get to do that by playing interesting teams in a nice place).

This year's attendees are, along with their ratings in WFTDA and DerbyStats.eu

As can be seen, DerbyStats' ranking (which is very closely related to Flat Track Stats' in its underpinnings) differs in ordering from WFTDA's at several points - most strikingly with Brussels and Birmingham. Unfortunately, a matchup between those two teams isn't on the cards for this EuroClash, but there is certainly potential for upsets in bouts which are scheduled.

In addition, the bouts which are scheduled form a connected graph (if you draw lines connecting each pair of teams playing in a game, the resulting image is a closed pentagon), so it is possible for us to perform post-tournament statistical analysis and estimate what the overall ordering of strengths would be.

In terms of team history, there's some interesting changes to report: the Blitz Dames' coach of some years, Smirkcules, is now transferred to hosts Newcastle. The two leagues aren't facing each other, but it will be interesting to see if any of his coaching style has transferred to changes in the new league. During his time at Birmingham, the Blitz Dames saw a significant rise in their ranking in both British Champs and WFTDA... although they lost their last bout against Nottingham's Hellfire Harlots by more than expected in 2019, so that's one bout which we expect to be vigorously contested by their current roster.

By FTS 's records, most of Oslo's recent games have been in Scandinavia or North America - they won the first Norwegian Championships last year, defeating Nidaros in the final; although their record against other nations is less perfect, with a fairly close 115:141 loss against Malmö's Crime City B their most recent bout on record. Earlier in 2019, they attended the Québequois tournament "La Foire du Nord", as the only attendee not from North America, and performed creditably, only losing to Connecticut out of all their games.

Our other international competitor, Brussels Roller Derby, also spent a significant fraction of their games in 2019 over in North America, winning every bout in the 8th "Deep Blue Derby" in California. Brussels have been focusing very strongly on only playing Sanctioned games, which means that they're actually a little harder to predict (a smattering of non-Sanctioned bouts on record usually helps the rating graph be better connected); but they have no losses recorded since 2018 [FTS is missing the result from their game against Lille at the end of 2019].

Hosts Newcastle have very few games on record for 2019, although they are one of the few teams to have played already in 2020, losing their first British Champs "Elite" tier fixture against the fearsome Central City Roller Derby. For the home teams, this tournament looks like a good excuse to play international teams they've not played before: their two fixtures are against Oslo and Brussels, their first against each, despite Newcastle having played several other Scandinavian teams, including Nidaros, in 2018.

On a Scottish note, whilst it's sad to see no Scottish teams competing at EuroClash this year, the Scottish officiating community is doing well, with 3 referees and 3 NSOs representing.

We would expect EuroClash to be live-streamed, although we have no confirmation of that to date. (As soon as we do, we'll edit this to add the link.) If it is, then we've reproduced the schedule table here:

We hope to bring you a longer article as a post-mortem on the whole event, in a few weeks' time, but for now: put a pin in this for your diary!