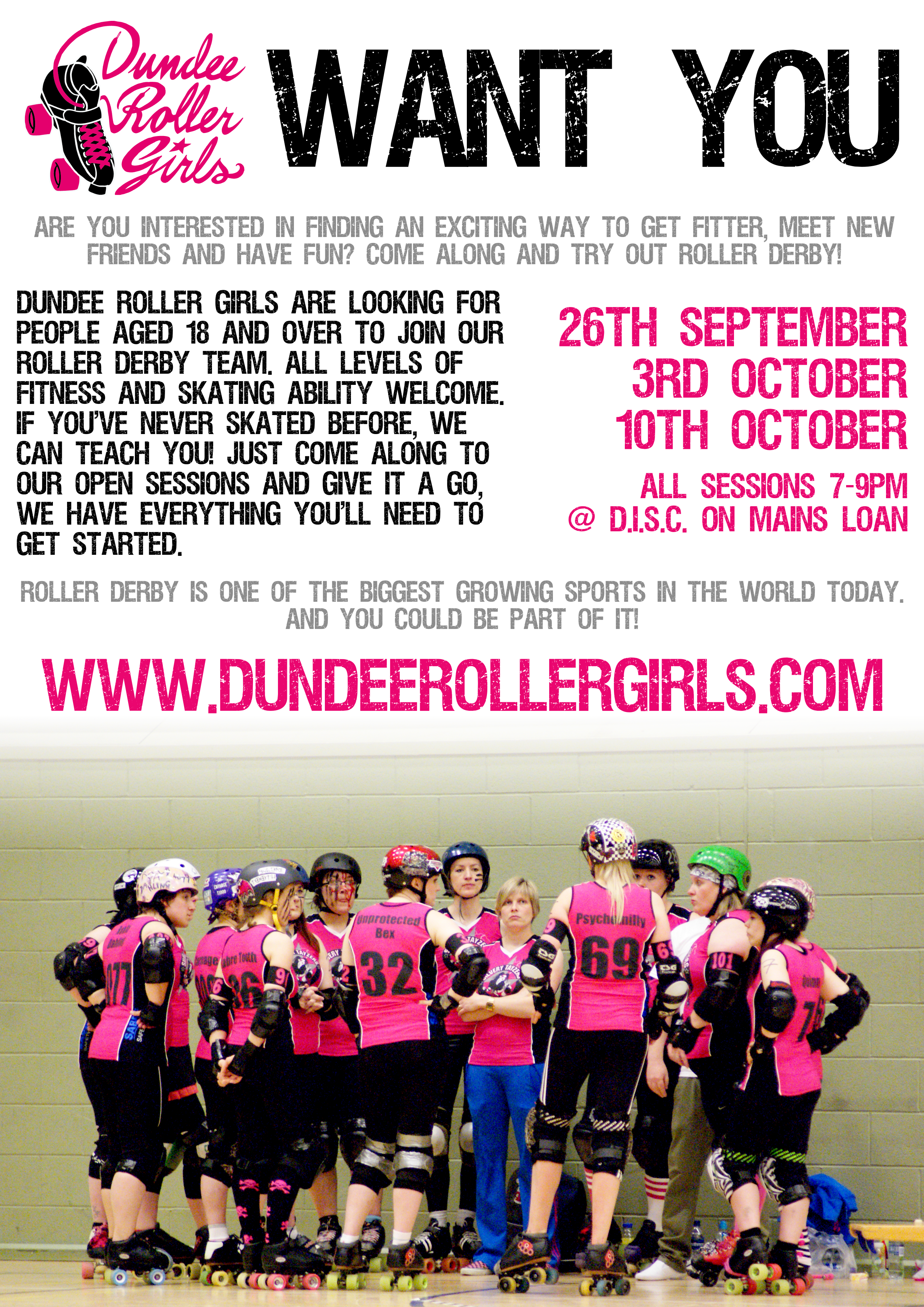 It's that time again. Yes that's right ladies and gents, Dundee Roller Girls are opening their doors to everyone over the age of 18 to come and try out roller derby. Why not come and check out the fastest growing sport in Scotland? DRG will be hosting 3 open fresh meat nights, which is open to both men and women of all abilities and ages (over 18 only!). Full kit needed will be provided, all you need to do is turn up! The three nights of Fresh Meat kicks off on 26th September, second session 3rd October, ending on 10th October. Session starts at 7pm until 9pm at the DISC, Mains Loan, Dundee. We hope to see all your smiling faces there!

The Jakey Bites Vs The Crash Team Brummies 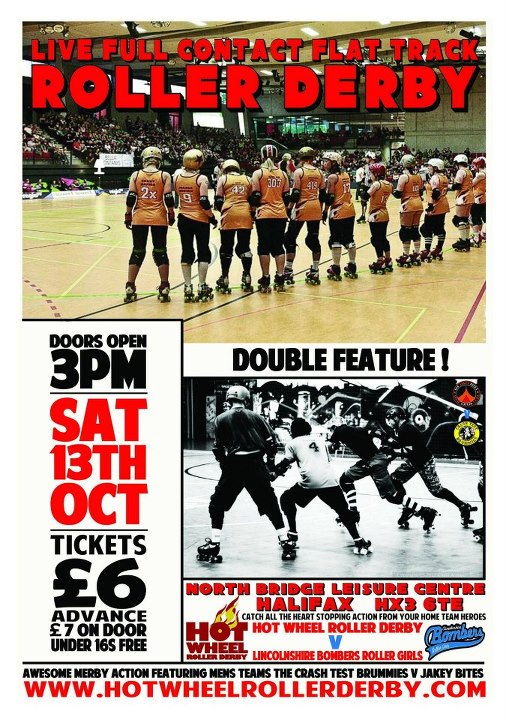 The Jakey Bites travel down south to take on the mighty Crash Test Brummies.Its part of a double-header,the main event being a clash between Hot Wheel Roller Derby and Lincolnshire Bombers Roller Girls. For those that wish to make the trip,you can buy tickets in advance here and find more details at the Facebook event page. 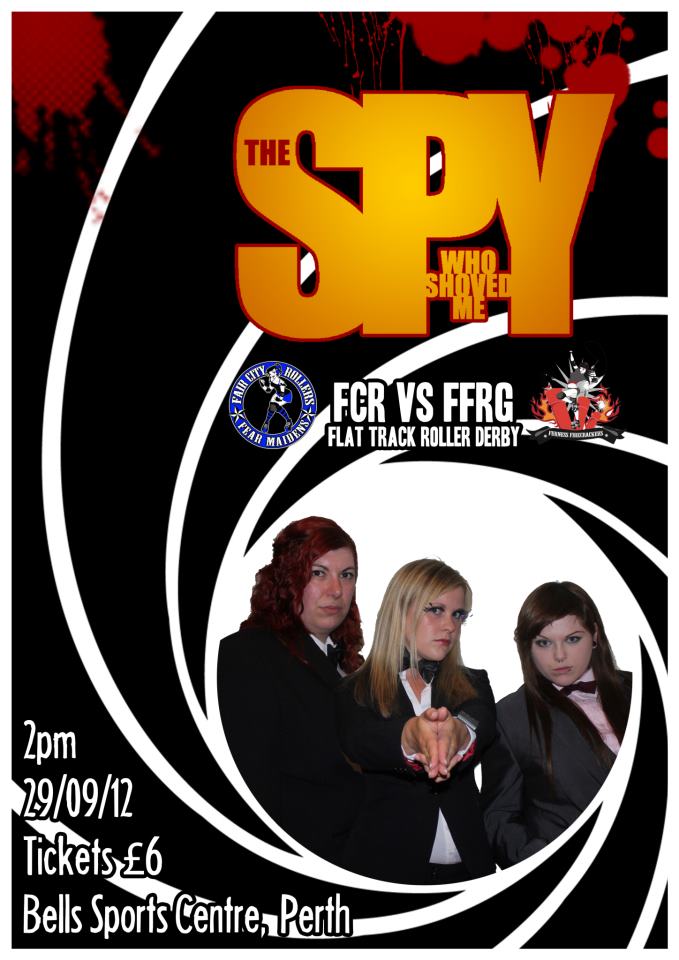 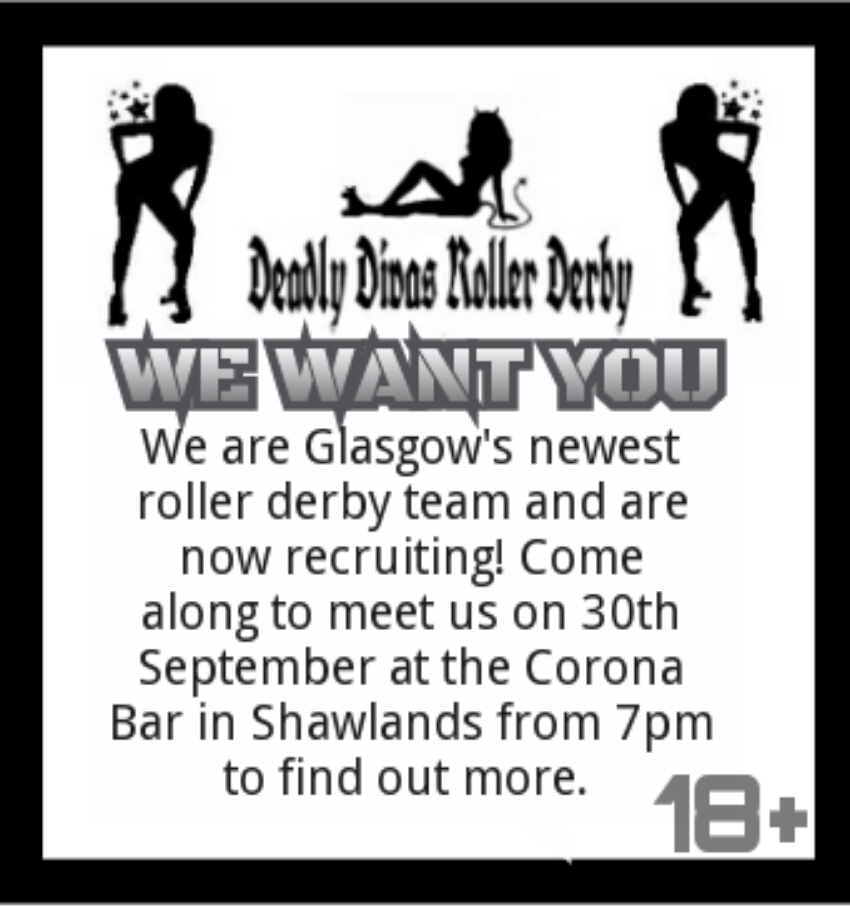 Deadly Divas Roller Derby are hosting an info night/meet at The Corona Bar,Glasgow, on the 30th of September.Anyone interested in joining Glasgow's newest league to get fit,meet new people and be part of one of the most exciting and fastest growing sports in the world,should pop along to the meet,or register your interest at the Facebook event page. DDRD's first training session takes place soon after on the 6th of October at the Maccabi Sports Centre,Giffnock,more details here.

So quickly our traditions come around again: Easter, Halloween, Christmas, and the monthly diaries for Fierce Valley's roller girls. This month it's Dita Von Cheese, who debuted at the Rising Stars bout held by Dundee Roller Girls a few weeks ago.

What first attracted you to roller derby? I found out about it through a friend and went through to the Fresh Meat Intake in October 2011. As soon as I strapped on the skates I felt like a kid again! I felt like I was racing around the track like a gazelle, it felt so natural. In reality, I was flailing all over the shop, making a racket and probably wrecking the skates! But I felt something I had not felt in a long time, utter joy and a feeling of falling in love. All I could do was think about derby.

Who are your derby heroes? I have many. Pretty much any derby girls I meet, everyone who is part of derby who helps, NSO’s, the Refs, the announcers, the fundraisers, the trainers. Everyone. They are all so important and make each league function. I also tip my hat to anyone who has never heard of roller derby and has to put up with me talking about it….endlessly.

How did you choose your name, and how does it reflect your personality on track? I had a few floating about, even had my boyfriend thinking up a few but they just didn’t suit. I thought of Dita Von Cheese, because it’s just silly and that’s just me. I wouldn’t suit a scary name or a witty one either. Also, I want to have a logo with a flaming cheese and a sexy mouse.

What was your biggest initial difficulty? My physical fitness level at the start was atrocious. I had roller bladed and ice skated when I was younger, so the actual movements were not the problem. I had left my job as a post lady in favor of an office job and was still smoking, so I had a lot of work to do. Mentally, it was seeing the experienced skaters doing their thing and making it look so easy! I found I was getting frustrated at being unable to keep up, but after a while I slowly got better.

Lots of girls find it hard not to spread the word about their new sport. How have you been spreading the word?  By not shutting up about it! I recently went up north to my home town near Aberdeen for a night out. I found myself pimping out Granite City Roller Girls; I believe you have 3 ladies and a guy interested : D

What’s the most important thing you’ve learned/done this month? There are a few things coming to mind, firstly I have learned I am terrible at 10 pin bowling (we recently had a FVRG night out), that the best bruises are the ones you get from landing on your OWN wheels, and how to effectively counter-block a-la-Psychomilly [of Dundee Roller Girls], who was a guest trainer last week.

What were the most difficult and the best things? I think the tricky part in derby is tactics. There are so many ways to approach a situation, and so many ways it can unfold. I find myself completely lost sometimes and I am in awe of any skater who knows what to do and how to get it done, in two minutes, without being floored, binned or breaking a sweat. The best thing? Right at the start of a bout/scrim. There is endless possibility of what could happen. I like that feeling.

What’s new for the Fierce Valley this month? This month everyone is buckling down and getting ready for tryouts at the start of October. We have our first ever home bout on the 17th November; ‘'For whom the skate rolls’’ against the Wirral Whipiteres. Bring on the Metallica themed bout! \m/ 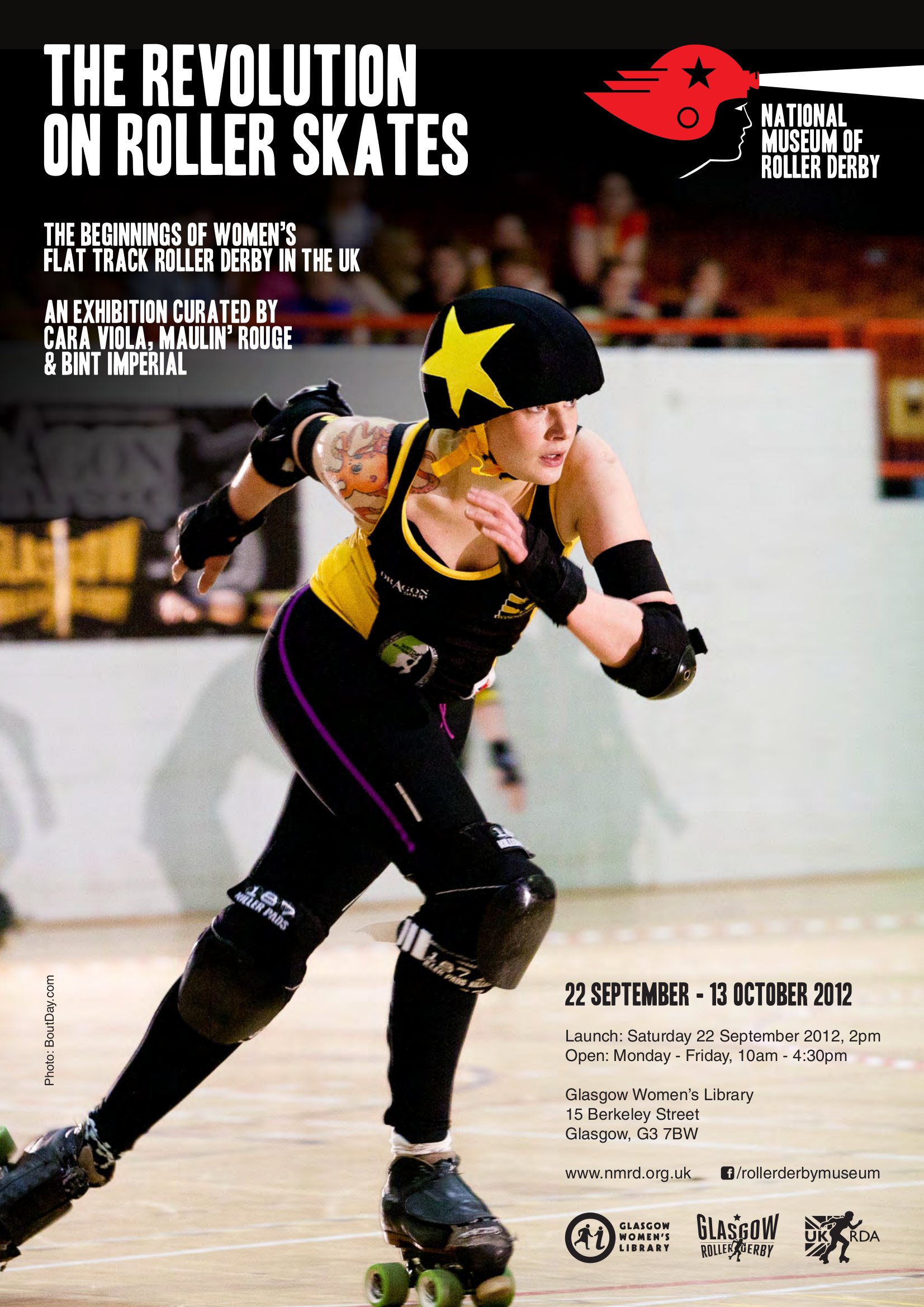 The National Museum Of Roller Derby present 'The Revolution On Roller Skates'.The first public exhibition on the beginnings of Women's Flat Track Roller Derby in the UK. Curated by members of Auld Reekie Roller Girls and Glasgow Roller Derby,the event is being held at the Glasgow Women's Library and launches on the 22nd of September.The exhibition promises an insight into the fast and furious early years of the sport in this country and is not to be missed!

This is a plea on behalf of Fierce Valley Roller Cubs: we realise that sourcing equipment for kids can be difficult, not to mention expensive, so with that in mind, we are asking if anyone would be willing to donate any old indoor wheels to our Cubs. We can use these on their skates for indoor training, so their other wheels can be kept for outdoor practice. Sets of 4 or 8 wheels (starter wheels such as Caymens would be ideal) would be gratefully received. If anyone is able to help, please contact us at cubs@fvrg.co.uk. Thank you for helping the next generation of derby girls and boys get rolling! 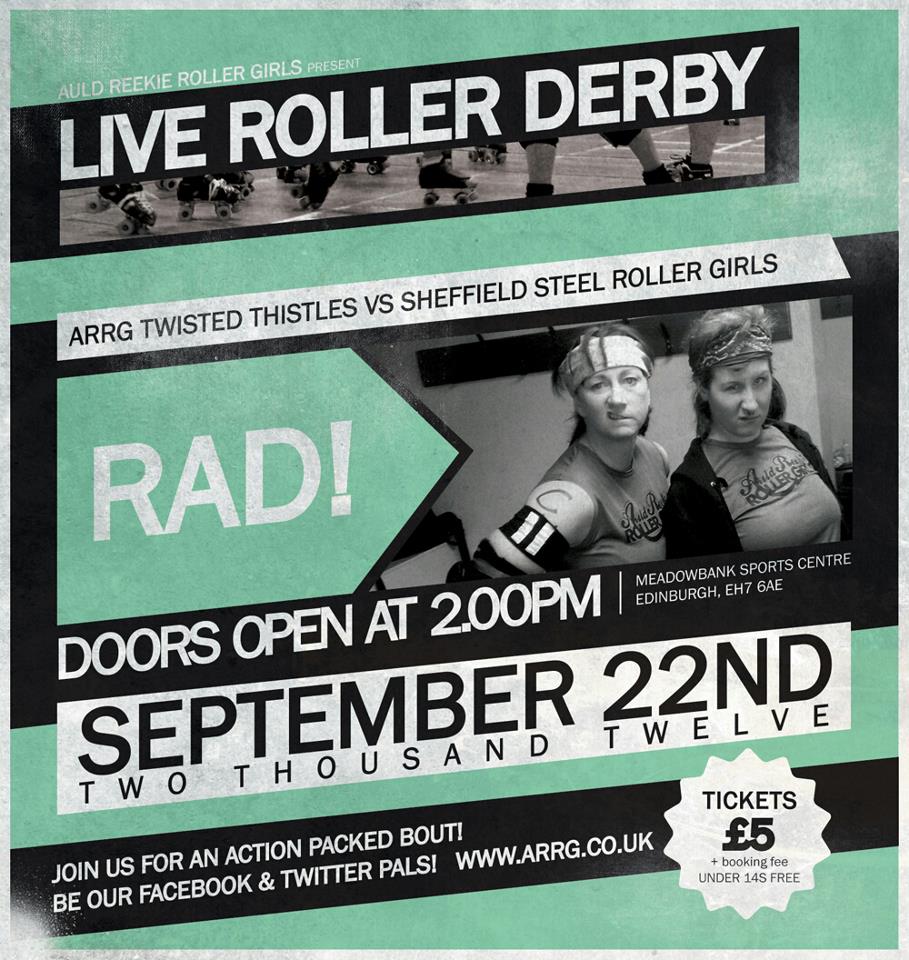 Auld Reekie Roller Girls' Twisted Thistles take on Sheffield Steel Rollergirls at Meadowbank Sports Centre,London Road,Edinburgh on Saturday the 22nd of September.Entry is £7 on the door or £5 plus booking in advance. ARRG won the last time these two teams met at the Chaos On The Clyde tournament,should make for a good bout as SSRG will be hungry to even the score. 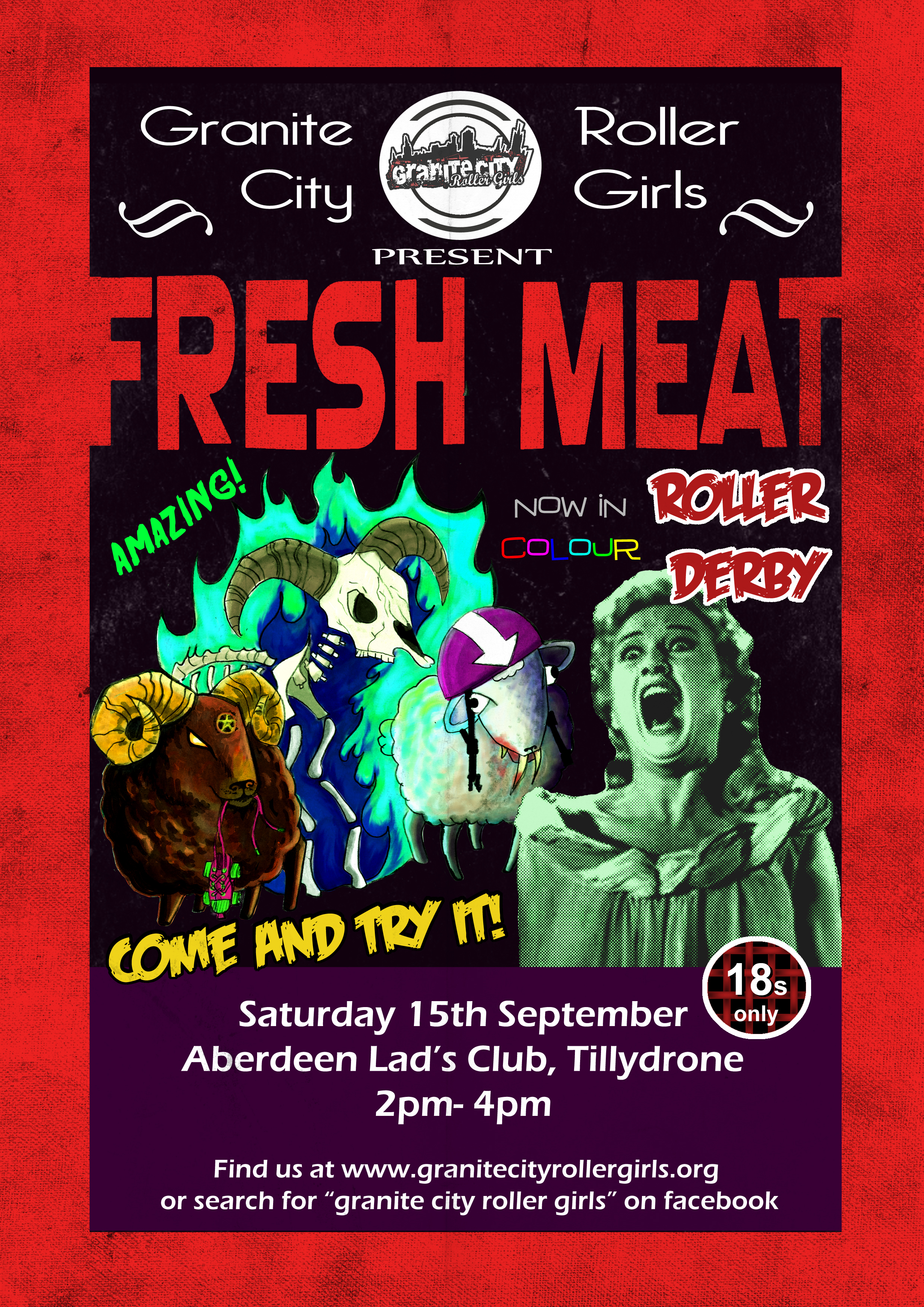 Granite City Roller Girls are recruiting skaters.If you live in or around Aberdeen and would like to give Roller Derby a go,meet new people,get fit and be part of an awesome team, then contact GCRG via their website or on Facebook. 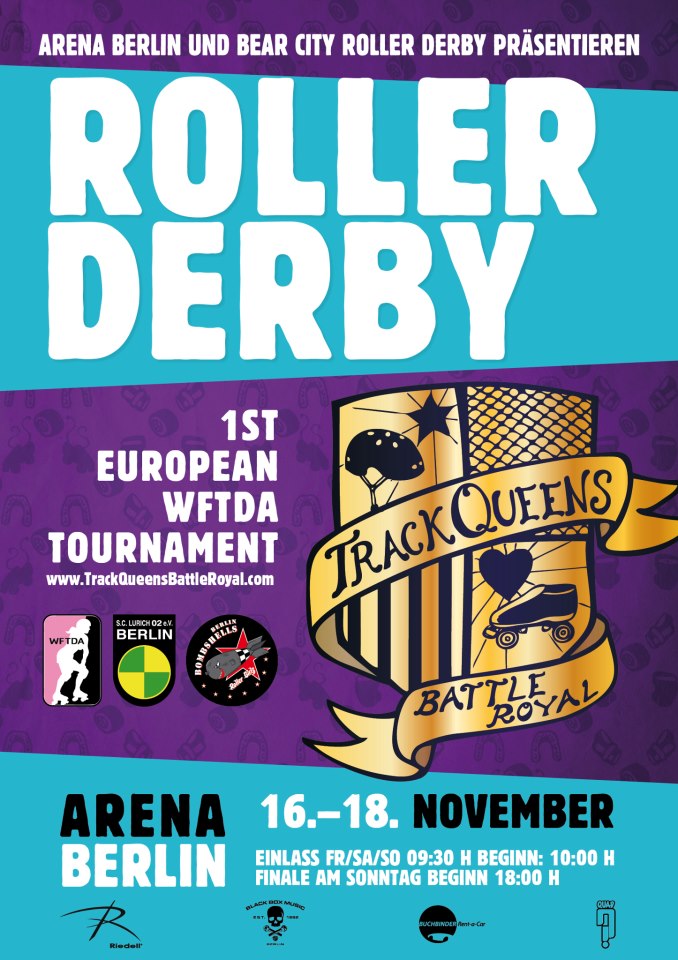 In November 2012,a bit of Roller Derby history will be made,Bear City Roller Derby will host the first WFTDA European tournament in Berlin.The aptly named,Track Queens-Battle Royale,promises to live up to its title with a stellar line up of teams from all over Europe.

The event runs over three days,16/17/18th of November,tickets are priced at 15€ per day or 40€ for the weekend,VIP tickets are also available and all tickets are valid for the aftershow parties.Available to buy online here. More details on the competing teams,officials,venue,seating plan and bout schedule can be found on the official Track Queens website. This first of its kind event is bound to be busy,so get your tickets and travel booked soon.