Watch Glasgow's Home Teams Fight For a Place in the Final!

This Saturday, (31st August) a very important double header will be played out … The 3rd bout of the 2013 Glasgow Home Teams Season, this is the decider which determines which two teams will earn a coveted spot in the Home Teams Final in November.

Everything is at stake – as the winning teams get to fight it out in the spectacular finale, and the losing teams will be relegated until the 2014 Home Team Season!

First bout will see the hot rockin’ Helles Belles up against GRD’s newest home team, the T-Wrecks.  So far this season, each of these teams has won one and lost one.  Each are going in with a fantastic roster of skaters with only one thought on their minds – WINNING! So who shall be victorious?

The second bout sees the ever-smiling Bad Omens up against the formidable Death Stars.  The Bad Omens have so far lost both bouts played, with the Death Stars winning both of theirs.  As is the case with roller derby though, anything can happen – and both of these teams will fight with equal fire for a space in the final!

Whatever the outcome, you are guaranteed two fast-paced bouts with the skill and strategy that Glasgow Roller Derby never fails to deliver, with all the fun and frolics that are afforded by Home Teams.

Come along and meet these 4 fantastic teams, featuring those vets you know and love, as well as the debut of some of GRD’s newest league members.  Buy merch! Buy cake! And buy your tickets in advance to avoid disappointment

(all pics by Dave McAleavy, boutday.com) 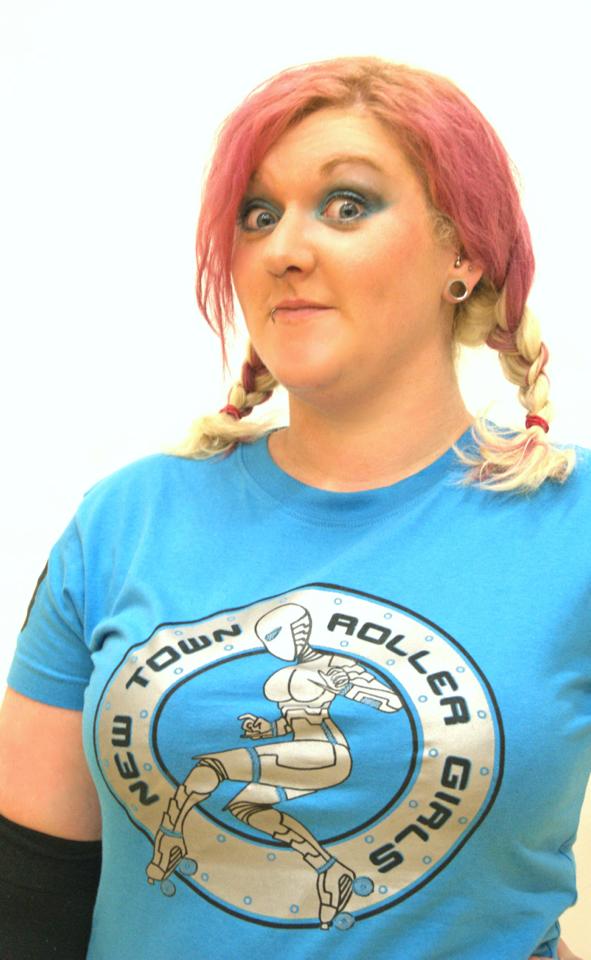 - What first attracted you to Roller Derby? I loved skating as a kid with weekends at the rollerina, and saw posters for AARG years ago which got my attention but after awhile kinda forgot about it. I was talking about it with one of my friends who told me that a league had started in Livingston and knew Hazzard. from there I just knew I had to get involved!

Most skaters have inspirations in their own or other leagues. Who are your derby heroes? I'd have to say Teenie Bash from ARRG since she got my little girl hooked after giving her a giant foam finger :P and from my own league Nettie Napalm and Bump-Her Stick-Her, because being mummies and working is hard enough to fit into a week, and your determination and drive at derby inspires me to do as well as you guys are!

Derby names are an important aspect of the sport, especially when you're starting out. How did you choose your name (and number), and does it reflect your personality on track? My name comes from one of my fave bands devildriver, and I chose number 13 because it may be unlucky for some but it's my favourite number, and I already have it tattooed on my arm so that's handy!

What's your favourite position and technique? Blocking, using my ass-ets ;)

Lots of roller girls find it hard not to spread the word about their new sport. How have you been spreading the word? I think I pretty much talk about it constantly! I've been flyering in work and in my local pub, as well as fundraising with the league and of course wearing my hoodie constantly for advertising!

What’s the most important thing you've learnt/ done this month? To make sure I concentrate on my pacing!

And the most difficult and the best things? I'd say learning to get on with it when you feel rubbish, and getting used to my weird new lump in my arm :P. And as for best getting faster and closer to being mins passed!

What's new for the New Town this month? Our article in the Konect, and trying to sort out some extra skatey days :D

FVRG skater - Must-Dash - will test the limits of your general knowledge from 8pm until late, and the bar staff will be serving a selection of FVRG-themed cocktails during the quiz.

So what are the prizes on offer? Well apart from winning the admiration of all the other quizzers, you could also win a pair of tickets to the upcoming FVRG vs. Granite City Roller Girls bout, or a meal voucher for two people at The Voodoo Lounge.

Entry will be charged at £1.50 per person, with a maximum of four people per team to keep things fair. This event is only open to those aged 18 and over due to licensing laws at the venue.

Funds raised at the event will go towards the general running of Fierce Valley Roller Girls, and can hopefully help subsidise their upcoming UKRDA application. 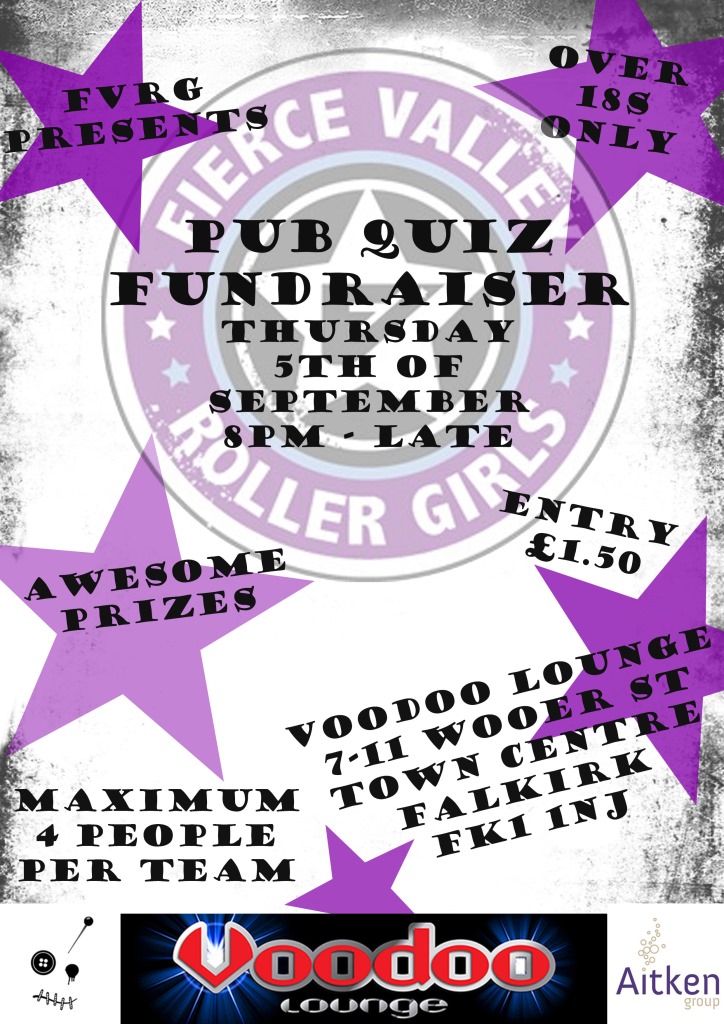 Both have increased their bouting experience this year by playing teams from all over the country, but this is the first time that the two will face each other.

Doors open at 3pm for a 3:30pm start. There will be a selection of craft stalls and a bake sale to keep you occupied while you wait!

Tickets are available at £5 (+ admin fee) online from Brown Paper Tickets, or £7 on the door. Kids aged 14 and under are invited along for free with a paying adult. Due to the limited seating at this venue, it is recommended that you buy your tickets (or get the free kids passes) in advance. 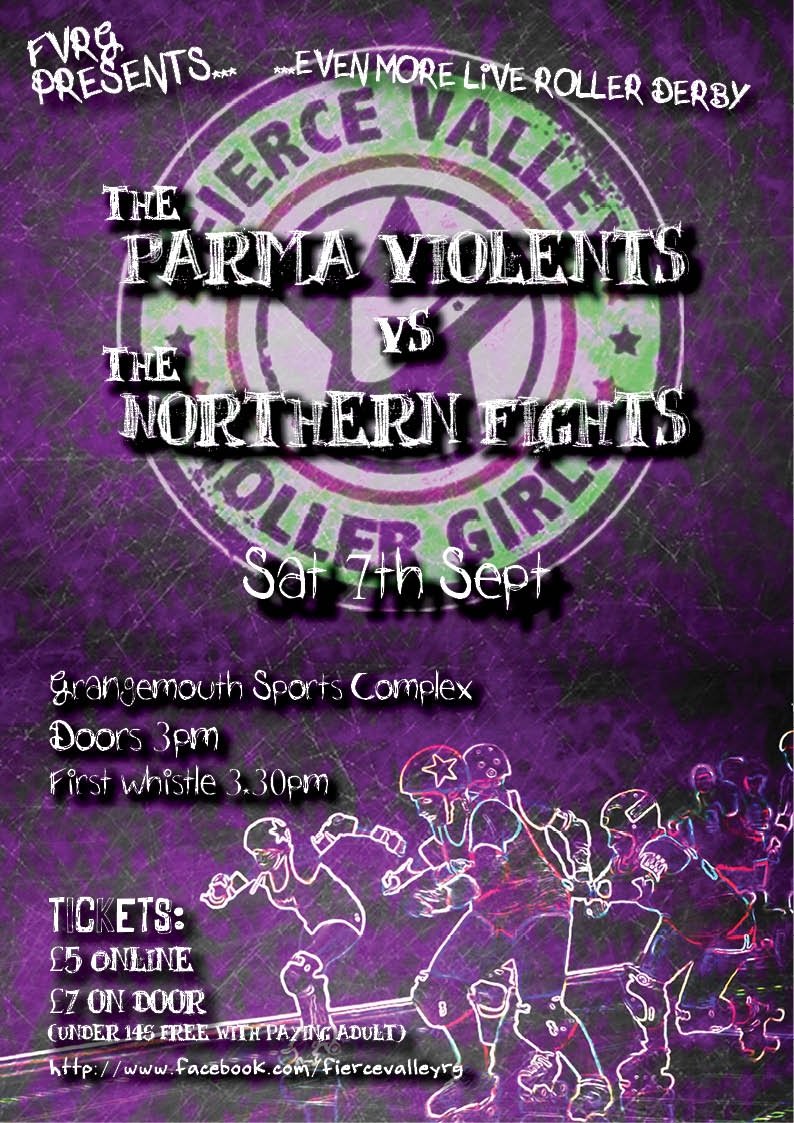 As August begins, Granite City Roller Girls celebrate their 1 year anniversary of the launch of our newsletter 'Granite'. The lovely Lynne 'Hugger-naut' McIlroy has spent a year putting blood sweat and tears into our great newsletter which showcases some the crazy things that we as a league (members and supporters) get up to.

Oodles of derby love to our newsletter queen Lynne who has pent 4 months off skates, going through surgery and physio after badly injuring her leg!

This month's issue highlights our upcoming trip to Tenerife for our first international bout as well as:

Fundraising antics at Asda Our Superfan Lowdown on wheels Frost Damage's fight for life Home bout venue Meet the 'Fights' And much more!

Don't forget to check out our past issues!

Fierce Valley Roller Girls continue to grow from strength to strength, but they want more Fresh Meat to sink their teeth in to! The league have organised a Taster Session on Sunday 18th August for you to see what roller derby is all about before making a commitment to join.

During the Taster, you will be buddied up with an experienced skater to go through the basics of skating (and stopping!) safely. You will can borrow their safety equipment and skates in this session – but please bring your own mouth guard (you can pick these up for under £5 from Sports Direct).

If the Taster has confirmed that this is the sport that you've been looking for, then it couldn't be simpler to join FVRG. Tiny from the New Skaters Committee will email to confirm the first date of your 12-week training plan in The Mariner Centre, Camelon - then all you have to do is show up with buckets of energy and a big bottle of water!

If you are interested in joining FVRG and are aged 18 or over, please complete their Online Registration Form to reserve your place in this Fresh Meat intake. Times and venue for the Taster Session will be confirmed once you have registered online

The Granite City Roller Girls are looking for your help to raise funds! 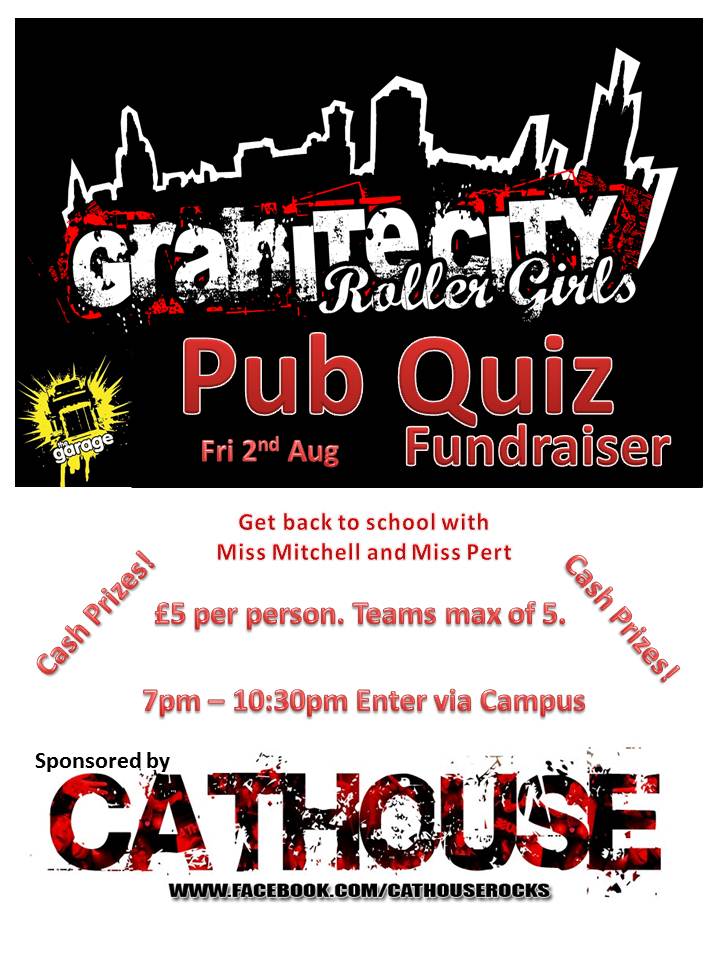 Get your head and the books and get back to school with Miss Mitchell and Miss Pert! It's time for your reassessments!

Doors to G2 (up stairs in the Garage via the Campus) will open at 7, with the test, ahem, Quiz starting at 7:30pm sharp!

Teams of no more than 5. £5 entry per person, per team. All proceeds go to your favourite Aberdeen based Roller Derby team, GCRG. 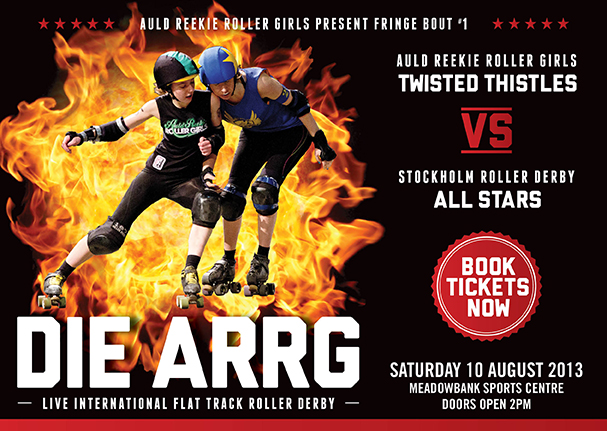 Auld Reekie Roller Girls host the rematch of the year in the first of their Edinburgh Fringe bouts against Stockholm Roller Derby. Last time the two teams met at Track Queens, Stockholm took the win in the last jam of a nail biting, edge of the seat bout. The action takes place at Meadowbank Sports Centre, London Road, Edinburgh on Saturday the 10th of August. Doors open at 2pm, entry is £5(plus booking fee). Tickets are available in advance here. More info on the Facebook event page.

This morning, UKRDA announced that they were reopening applications for several of the National Team Coaching positions. If you think you can coach Team Scotland (or Team Wales) to success in the 2014 World Cup, and other endeavours, then apply before the 31st of August.

The full press release is reproduced below, with all the information and links you need:

Last month Blood & Thunder announced that the second Roller Derby World Cup is to be held in Dallas, Texas in December 2014. At UKRDA we are very excited about being appointed by BRSF to help get the official UK National teams up & running.

The first step in making this happen is to appoint a Coaching Committee for each team. UKRDA will then work collaboratively with Coaching Committee’s to help develop and run fair & transparent skater try outs and get team coaching sessions up and running. Although the day-to-day running of the teams will be in the hands of the Coaching Committees and skaters themselves, UKRDA will be on hand at every turn to offer support, guidance and oversight ensuring everything is running fairly and according to plan.

We’re looking for enthusiastic, committed and passionate people to join the Coaching Committee’s and work with us to ensure Team England, Team Scotland and Team Wales are the best they can be; to represent UK Roller Derby in style next December. Applicants' need a lot of drive, experience, knowledge of cutting edge roller derby, and the leadership & communication skills to coach your team to success. Come on UK Roller Derby... let’s smash last time’s results!

Round 2 will be open for applications between 22 July 2013 – 30 August 2013. Applicants need to return the application form linked below along with three letters of recommendation. Letters of recommendation can be from skaters/coaches & leagues and must be from least two separate league sources. Applicants for coaching positions can be any nationality and be affiliated to any team, UKRDA members or not.

To apply for one of these positions, please fill in this application form: https://www.dropbox.com/s/n4yefkr41018r0k/National%20Team%20Coaching%20Application.docx

For details on the selection procedure for National Team Coaches please see: https://www.dropbox.com/s/6qp1c5ar4tr0q2j/UK%20National%20Roller%20Derby%20Squads%20-%20Selection%20Process%20v1.0.pdf

For details on the Blood & Thunder World Cup see: http://rollerderbyworldcup.com/

The selection timelines are detailed below: 22 Jul - Round 2 applications open

23 Sept- Deadline for statements of intent

30 Sept- Deadline for responding to all applicants

Co-Ed Roller Derby has recently taken hold of the traditionally female sport, and Fierce Valley Roller Girls want a piece of the action!   Scottish Men's team, The Jakey Bites, have already played with Dundee's Silvery Tayzers and Aberdeen's Granite City Roller Girls, but how will they fare playing against (or with!) FVRG's Parma Violents?

Both teams will be taken out of their comfort zone as each line-up will feature male and female skaters. So what will these mixed teams be called? Violent Jakeys and Parma Bites, naturally.

Come along to The Peak in Stirling on Saturday 10th August for a guaranteed action-packed afternoon. Tickets are £7 on the door (under 12s go free with a paying adult). Doors open at 2pm for a 2:30pm start. Further details available on the Facebook Event. 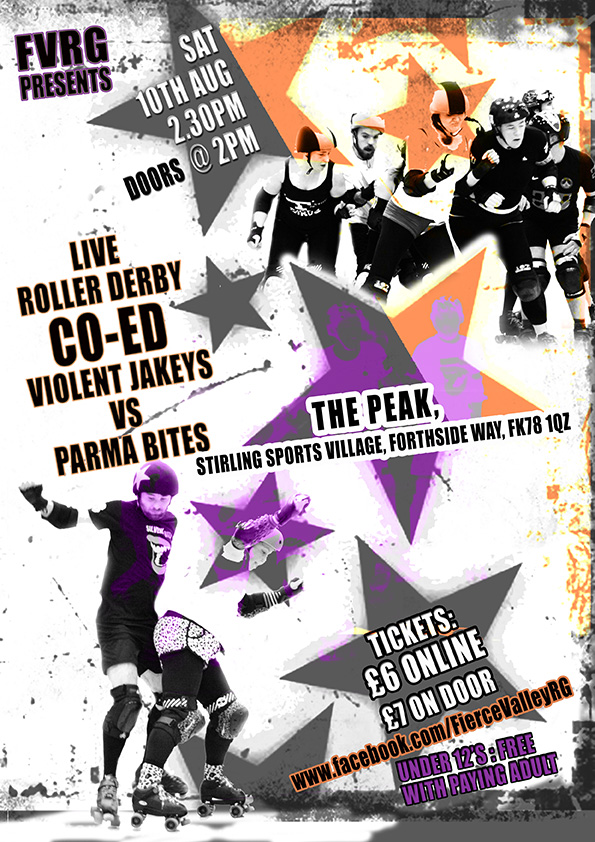