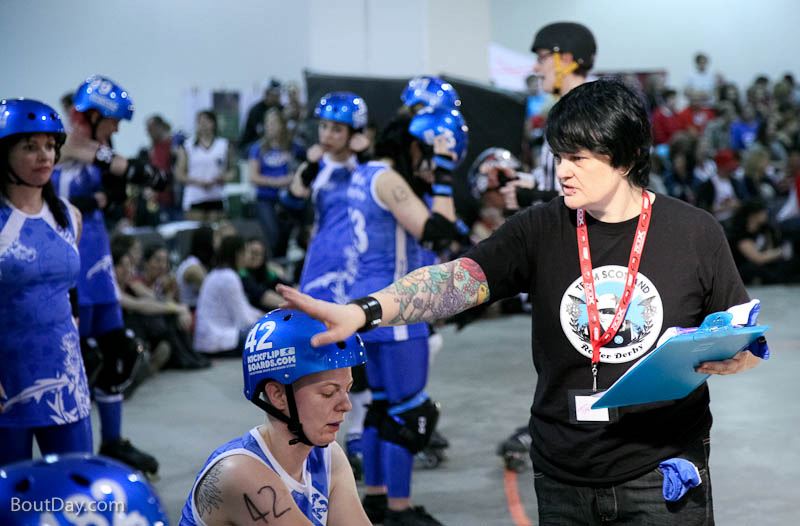 The skaters always seem to be the stars of the Roller Derby show, but realistically, a live bout would dissolve into chaos if we didn't have Team Line Up Managers, Bench Managers and Non-Skating Officials (NSOs).

Tarce, a skater with Glasgow Roller Girls, unexpectedly found herself positioned as Line-Up Manager for Team Scotland only a few weeks before the World Cup kicked off! The person in this role is a vital part of any team as they take the time to understand each skater's strengths and weaknesses, and can make clear decisions on which skaters will play together per jam, and how to recover when players are sent to the penalty box.

We catch up with Tarce to hear how she found the World Cup experience and just what the job entails.

How did you become involved with Roller Derby?

It was back in February 2010 when I got a message about the Glasgow Film Festival on Facebook. The message also contained a part about a roller derby bout that Saturday between Glasgow Roller Girls and London Rockin' Rollers. Now I’d never heard of roller derby before but something about women on skates possibly hitting each other somehow drew my interest! I decided to go along by myself to check it out and as soon as I entered the room I knew I was in the right place for me! So this was where the cool people hung out!

I went along to the after party too and got talking to one of the refs (who I’d met before through our mutual tattooist) and him and his lovely wife talked me into coming along to the next newbie intake, which just happened to be that same Tuesday! I also remember talking to a rather drunk Marla Mayhem of GRG and the Fabulous Mighty Mighty Bash of LRR and thinking these were women I could definitely get along with.

I plucked up the courage to go along to newbies that very Tuesday and managed not to break anything or embarrass myself too much .. and I’ve been hooked ever since!

How did you get involved in Line-Up in general, and what made you sign-up for the World Cup?

Haha now here comes the funny part! When I did the line up managing for Team Scotland’s first game against New Zealand at the World Cup, that only the second time I had ever done it! To say I was slightly nervous would be a small understatement; I’d much rather have been skating at that point that much I knew!

Back in February last year, Viper, our head of league training at GRG at the time, was in the first stages of trying to organise a national team for Scotland and she was desperate for people to help out. To play to my strengths, I volunteered to administer the Team Scotland forum as I sit in front of a computer all day at work and I’d done that sort of thing before anyway.

To cut a long story short, before I knew it I was Chairperson of Team Scotland and I was off to Toronto in a few weeks! It was at that late stage that the person we had in the role told us that due to family commitments she would be unable to attend theWorld Cup. My one previous time doing line-ups (TS vs Northern Allstars) had filled the captains with enough confidence that they asked me to do it again for Team Scotland – the crazy fools! Well, I was going to be there anyway and I knew all the skaters, whats the worst that could happen?!

What makes a good Line-Up Manager?

Well you definitely need to remain calm and focussed in the eye of the storm! Exuding an air of confidence and that you know what you’re doing are very important too (even if you are actually bricking it inside!). You have to make instant decisions and stick to them. Stay focussed on whats happening on track and in the penalty bin and listen to what the bench manager is shouting at you too. You have to be able to be firm with the skaters as well as they will either be giving you puppy dog eyes to go on next, moaning that they want to go on with their best buddy or crying cos they ain't getting played enough! It’s a tough job! You’ve also got to keep an eye on them, especially the jammers, to see how tired they are and if they maybe need to sit off for a couple to get their breath back. Its definitely not a job to take on if you want to get a good view of the bout, that’s for sure!

How did you prepare for the World Cup?

When I realised that I was going to be the one doing the job, I made sure I went along to all the training sessions and watched and got to know all the skaters that weren’t from my own league. I needed to familiarise myself with the roles they played when skating; who only blocked, who would jam and block, who was confident pivoting, etc. I’d have liked to have been able to perform the role at more bouts or even scrimmage sessions but unfortunately there just wasn’t the time.

I also spoke to Knuckles, our bench manager and got as much information and tips from him as possible. He does an amazing job and it was great working with him.

Has the experience changed how you would manage Line-Up in future?

I don’t want to do it ever again! Haha. Seriously though, I did gain a lot of confidence in the role by being thrown in at the deep end; it is full on and it is stressful but at the end of the day as long as you get enough skaters on track you’ve done your job! Lol. If I do it again in future I wont worry so much about trying to stick to the written line-ups provided by the captains; after that first person goes to the penalty bin you can basically throw them out the window. Just stick to the general ethos in your head of what they want and just go with what feels and looks right to you at the time. I think trying to work to that bit of paper definitely made things more stressful. So I guess the lesson to learn is: know your skaters well, know their strengths and weaknesses and know the tactics that the captains are playing to.

What do you think the World Cup has done for Roller Derby in Scotland?

It's really given skaters new enthusiasm and motivation! Something new to aim for; who wouldn’t want to make it on to their country’s national team! We showed this year that Scotland is definitely a force to be reckoned with and basically anything is possible for us. Roller derby is going to keep on growing exponentially from here, its going to be huge and Scotland has a chance to be a big name in the sport. We have some amazing new skaters coming through who have a real hunger to do well. I see great things ahead for us! This first World Cup for a bit of an experiment really but it totally worked! I cannot wait to see what the next one will look like... it's going to be immense! Watch out USA, Scotland is coming for you!

Do you have any advice for anyone considering becoming a Line-Up Manager for their local league?

All those non-skating roles are vitally important to the sport as a whole; if we didn’t have people to fill bench and NSO roles then we couldn’t play, simple as! All leagues need those people that are dedicated to the sport and want to do their bit even if it doesn’t involve skating. And the skaters are hugely thankful that they come along and do what they do.

Come along as often as you can for scrimmage sessions especially. Get to know everyone and feel part of the team. Know the rules inside and out and watch as much roller derby as you can – just like being a skater really! Practice makes perfect, the more you do it the more confident you will get. I don’t think there are any big secrets to it, it's just about being level headed, sensible and logical really. And if the skaters know they can rely on you they will love you forever!