While this Saturday is very exciting for Scottish derby in itself, Sunday is equally exciting as it holds the debut bout for not one, but two teams: Dundee Roller Girls' new B-team, the Rising Stars, and Durham Roller Derby (the second roller derby league to hail from that city). They'll be playing each other in the second of two bouts held by Dundee (the first seeing the Silvery Tayzers face off against Roller Derby Leicester).

Given how rare it is to see a double debut, we caught up with both teams to see how they were feeling. For Dundee, we interviewed Rising Stars Captain: LowBlow Baggins (recently featured as one of their Skaters of the Month). Durham's responses are from Claire. 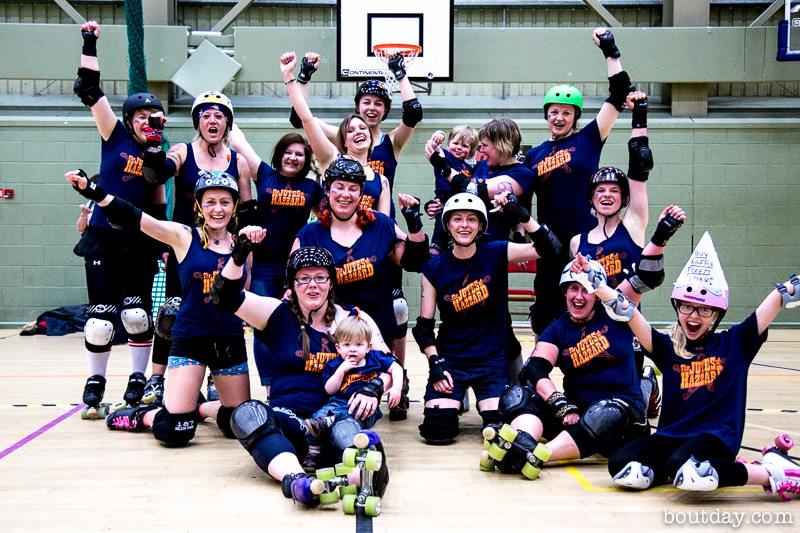 (To Dundee): How does it feel to be Captaining Dundee's new B team for their inaugural bout? LBB: It feels great knowing my team mates trust me enough to vote for me as captain. The Rising stars team is such an exciting thing for DRG and I'm just really happy to be a part of it.

(Dundee): I'm told that you had a long path getting here, injury postponing your initally planned appearance on track. Has this experience influenced your approach and feelings about debuting on Sunday?

LBB: I did unfortunately break my ankle at scrims, right before my first bout. After surgery I was off skates for about 4 or 5 months before returning which felt like a lifetime away from derby. When I first came back I spent a lot of time relearning basic skills and building up my confidence again. It gave me a chance to do other things such as Bench and Line Up so it was a great time to expand my knowledge of the sport. I actually popped my bout cherry two weeks ago as part of the Jutes of Hazzard in the second DRG Home Team game. It was scary and fantastic all at once. This Sunday I'm just looking forward to playing the best I can and enjoying my time on track. 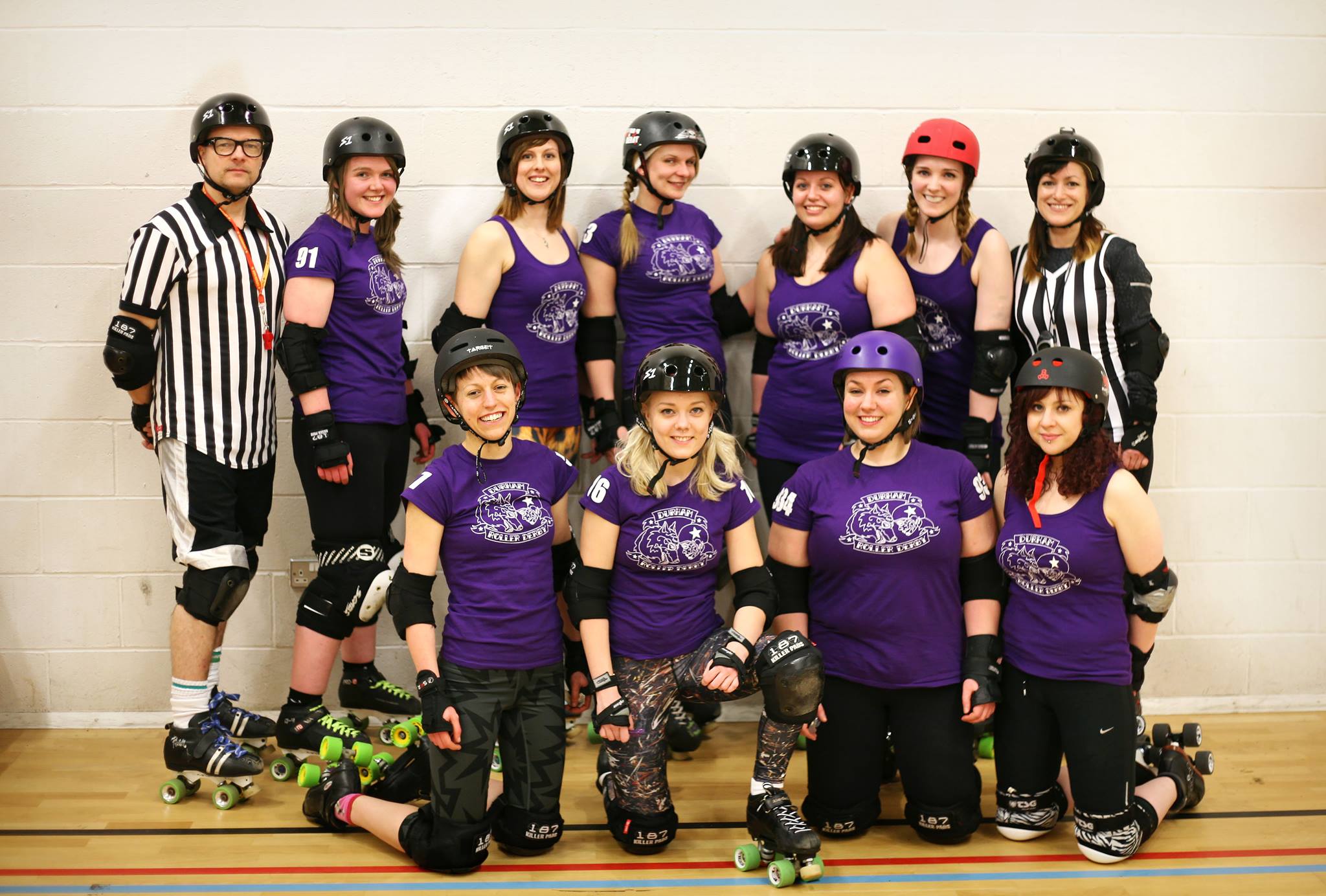 (To Durham) Normally we’d ask how you’re feeling leading up to your first bout, but you’ve played in a bout before, with Durham City Rolling Angels (DCRA). How did that cherry popper experience compare to the anticipation of your first bout as a new league?

C: Our first cherry popper against Middlesbrough Milk Rollers' Rising Rollers was amazing. We were so privileged to have that experience of playing with DCRA after only a short time on skates (most of us who now skate with Durham Roller Derby (DRD) who skated with DCRA at the time, had only joined in the March previously, so had 6 months skating experience). To do a win was incredible, but we would never have had the skills or knowledge to pull it off if it wasn't for the hard work that Jonny and Bronia put in with all of us. They gave us not only their time and effort, but they planted a seed in us to make us become so completely absorbed by roller derby and skating that it has taken over our lives and created a bit of a Roller Derby monster in us all.

Now as a new league we have felt some pressure, to prove ourselves as a team. Not only from our phoenix-like beginnings but also due to the fact that there are two WFTDA affiliated leagues within about a 40 minute radius of us and amongst them are two Team England skaters [Terri Sudron and Ella Storey from MMR] and three Team Wales skaters [Newcastle Roller Girls' Gin and Sonic, Marie Bayonet and Hit One Purl One].

When we began with DCRA roller derby was still evolving, and it will be for years to come. It has changed significantly since our initial outing into the derby world from the effect of recent rules changes to new tactics and skater ability.

Now as DRD we feel stronger as a unit, and more driven. So although yes we’re nervous for our first public outing as a team we’re more excited just to see what we can actually do on the day.

C: We have very intensive, but fun training. Introducing stronger walls and integrating more dynamic blocking techniques have been our core area of focus.

We have made full use of all the resources available to us from utilising our new found derby links by attending various mixed scrims and cherry poppers, to simply engrossing ourselves in the MRDWC (we adore Spectral, he’s our idol here at DRD) and the WFTDA archives.

By simply watching our local leagues we also learn a thing or two, and can only thank them for their support so far. We are incredibly lucky to have such talent so close to home, and to have Moose [of MMR] benching us is on a Sunday is amazing.

We live by the theory that as a team you are only as strong as your weakest player - luckily due to the small numbers even if someone is struggling with one area, they get practically one on one coaching, and time, to get them up to the level we require.

Encouraging everyone to attend as many scrims, bootcamps and skate related activities we feel has also helped to enhance our team and if nothing else allowed our newer skaters to develop their skills and find their place within the team.

LBB: To prepare for the bout we have been working hard on our drills and scrimming as much as possible. We train with the Tayzers every week and they have given myself and all the other guys great advice. It will be a really awesome game and I hope everyone has fun watching us. :-) 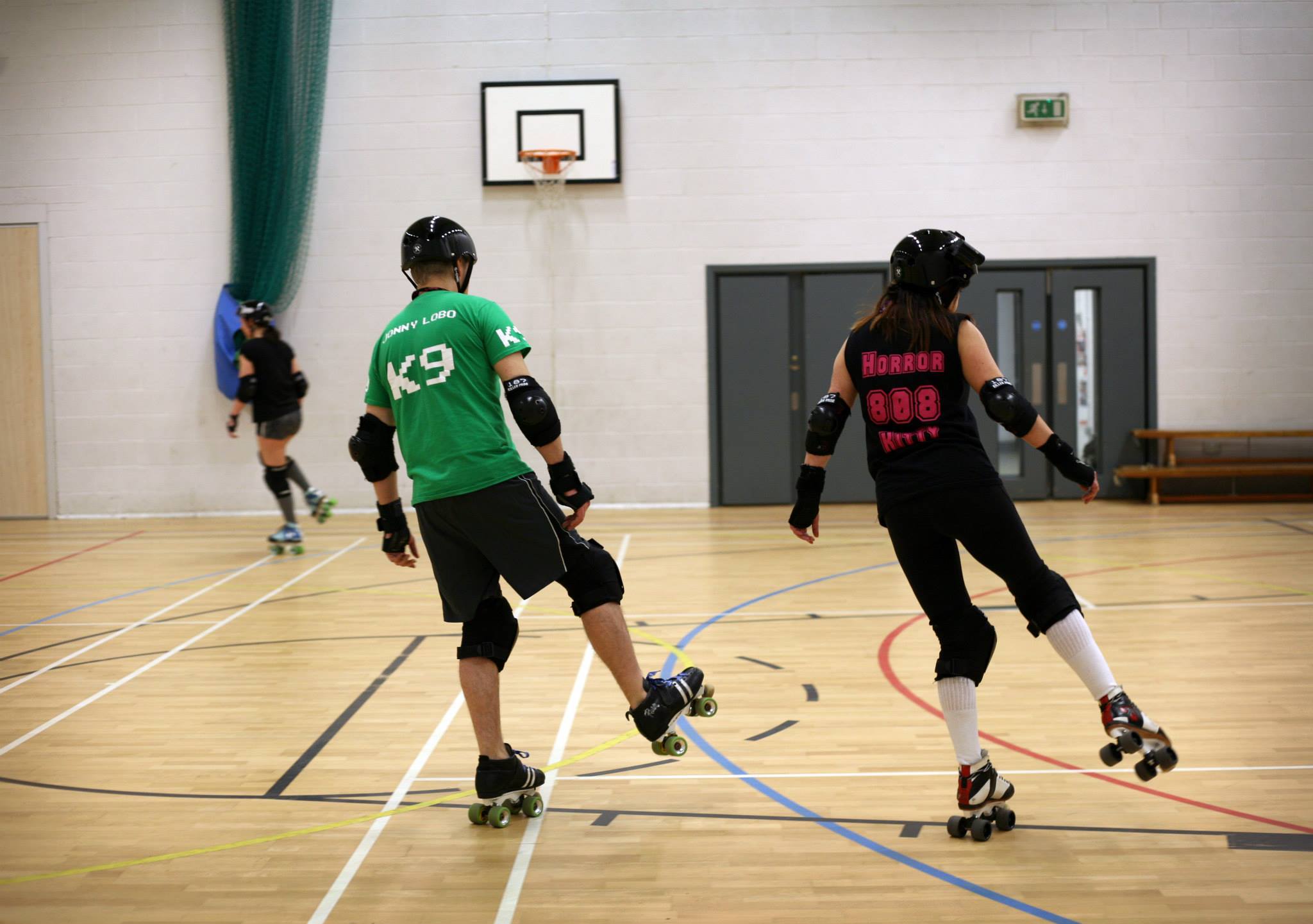 (Both) With both teams new and unranked, it’s hard to predict a winner, let alone a score. What are your aims for this bout?

C: As corny as it sounds our aim is to go out and have fun - yeah a win would be awesome, but we have no idea how things are going to pan out. We could predict all we like but this is our first time figuring out if we’re going in the right direction as a team.

As long as we do ourselves proud and come away smiling we know we’ve had a good day, oh and obviously get some awesome photographs - we all love a good roller derby photo!

LBB: I think it's going to be such a fun game. We would of course love to win but I mainly want to make sure everyone on track has a great time. We have been training really hard, it's amazing watching everyone improve each week. I hope our team work shines through and that we make our Tayzers proud.

(Durham) Newcastle Roller Girls and, on the other coast Furness Firecrackers, have been visiting Scottish leagues a lot recently; Durham not being that much further away, are you planning any further bouts in scotland after this one?

C: After this we’re going to be focusing our attention on an intake. With only 11 members (9 bouting) we need extra bodies, as every league does. We hope to double our numbers, but we're also aware that Durham is a small city for two leagues. So we’ll be spending a lot of time focusing on that and getting our cubs [newbies] up and passed mins and beyond. (As part of this, Durham have made a video to promote themselves for tryouts)

Scotland is a relatively handy location for us Northern England based teams, and although we hope to fit some closed doors bouts or mixed scrims in before the years out we’ll probably use the intake period as an opportunity to assess how we did against the rising stars and what areas we need to develop as skaters - to take stock and then continue to push forward - but we’ll definitely be back up North of the Border soon!

You can catch Durham and the Rising Stars on track on Sunday at the Dundee International Sport Complex, starting at 12:30pm!