Second up on our trip through the countries of Northern Europe attending the Blood & Thunder World Cup, and it's Team Belgium's turn.

As with Team Netherlands yesterday, Belgium is new to the World Cup this time around, and are pretty evenly matched with the former. In fact, Belgium placed 3rd in the European Championships, just ahead of Netherlands, after an extremely close bout. (We suspect that if they match up in Dallas, the Netherlands will be interested in reversing the situation.)

C.C. Titmouse was good enough to answer our questions on Team Belgium (these questions were received just before the Championships started). 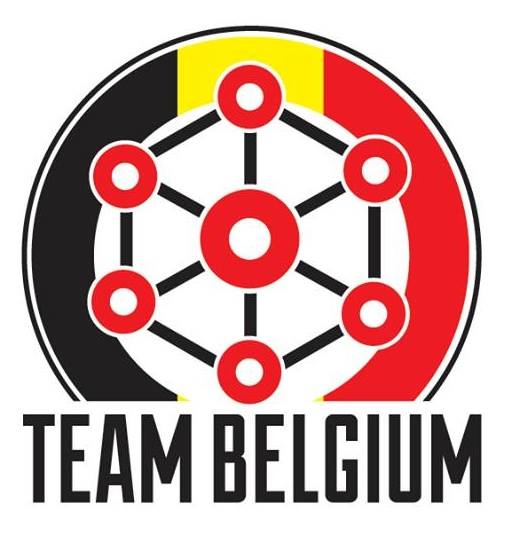 Most of Team Belgium is derived from the plentiful Belgian leagues (excepting Scotland's Lilo and Stitches?). How was the selection process organized (did you have more expatriate skaters try out and not make the team, for example)?

Where did it all start ? On January 1st of 2012, Lolli Chop created a facebook group for all Belgian skaters, from an interleague point of view. Belgian leagues were this way, we were able to stay informed on Belgian roller derby events, to adjust our league’s calendars to other derby-events. Since we’re a small country, we’ve always wanted to support each other, so a forum was needed. In June 2012, SckrPnch (the local Belgian roller derby skate shop) organised « Derby Revolution », Europe's very own annual 4 day Roller Derby Convention. This event brought the best, international coaches and skaters to Belgium and gave the opportunity learn &  to challenge teams to scrimmage. It didn’t take long until the suggestion was made to set-up an unofficial « Team Belgium » delegation and challenge The Netherlands to set-up an All-star delegation, to play a challenge bout at Derby Revolution 2012. Before the bout, we wanted to have an opportunity to have at least one practice together, so on June 17th of 2012, the Blackland Rockin’ K-Rollers (Charleroi) hosted the very first national practice. The start signal was given and on June 28th, we (re-enforced by Kamikaze Kitten, who was eager to join us) played the Dutch All-star team, « The Bloody Oranges » at Derby Revolution and we took home the victory. At this point, we were all just seeing how and where things were going, but the idea of a national team started to get shape. We formed a little group with two representatives/league and started meeting on a regular basis. We started hosting regular national practices, open for all skaters who were linked to a Belgian league and learned from and with each other. Every league was encouraged to host at least one practice a year, which made 10 practices, since we were 10 leagues at the time. The main point on our meetings was how would we go forth in creating a national team/organization. The 2011 Blood & Thunder Roller Derby World Cup, held in Toronto (Canada) from December 1st – 4rd, was the first international competition for national team. Different countries put together teams, but since the timing was rather short, not every set-up went as smoothly. This was exactly why we wanted to take advantage from our country being small and thus making it possible for us to meet and train together on a regular basis. We wanted to do it right from the start, creating a base that would last us a long way.

It took us from that first training in June 2012 until November 26th, when we announced our Belgian coaching team to the world !

From there on out, things went very fast. We hosted a national practice every month and every month all Belgian reps (two reps/league) came together to discuss our next steps. The coaches started taking notes and putting together a selection of 35 skaters. June 2014, they selected a core of 20 skaters that will represent Belgium in the 2014 World Cup and we’re working up to the European Roller Derby Tournament in Mons, Belgium the upcoming weekend.

With the majority of your skaters in Belgium, I guess this makes organizing practices easier than it might be? How have they been scheduled (avoiding conflicts with team practices etc)?

In Belgium, we’ve always had trouble finding venues, but if you gather forces with all the leagues, things go easier. It does take a lot of coordination, even if you’re relatively close together. We try to let every league host one practice, that way we split venue costs and we encourage Team Belgium’s practices and events to be run alongsides fixed training dates. Most of the Belgian leagues train on Sunday f.e., so we try to organize all Team Belgium-related events on Saturday. If it does conflict with other league’s practices, it’s up to the skaters to decide of course, but we asked on before hand to commit and Team Belgium promises to take every league into account as much as possible.

Team Belgium is off to the European Derby Tournament in September. What are you aiming to get out of the tournament? (You've also had a few other pre-Dallas bouts, so how useful have you found them in general?)

We’re really looking forward to the tournament! It’s the ideal occasion to meet other teams, on and off track! We want to play the best game we have in us and play together as a team. We want to win of course, but we’re merely in it for the experience and experiencing gameplay of other teams. We want to learn from it and use that knowledge to improve our own game for Dallas!

We’ve played Germany & The Netherlands a couple of months ago, and it has been a good experience. A good way to get to know the teams, but the ideal way to learn how individual skaters work together. Although we’re a small country, the team consists of players from out different leagues and it remains a challenge to play together as a team and not just a bunch of awesome individuals.

What have you been doing to raise funds, awareness + sponsorship for the big expenses of getting to the World Cup?

We’ve been communicating quite some info on our skaters, coaches, practices, mostly on our website, facebook, Instagram & twitter account. We’ve organised 2 public games against other national teams, we’ve provided merch (that will be available at the European Tournament!) and we’re currently working on a Fundraising-plan to get more money for our skaters. So keep your eyes (and wallets! :p) open! ;-)

What are Team Belgium's aims for Dallas?

We haven’t set team goals just yet. Gameplay-wise we’re waiting for the European Tournament, since that’s the ideal occasion to set realistic goals for Dallas. Team spirit wise, we’ve been bounding since day 1. Belgium is small and has a lot of political issues, which has no place in derby. Whether we’re from the Dutch, French or German side of Belgium, we’re all Belgian and we’re proud to be! Our main goal is to be a front, to stick together off track,  so it translated on track as well.

Bonus questions: Does the English language focus of derby make it harder for Belgian derby, or are English language skill (and the recent publication of the WFTDA rules in French) in Belgium sufficient to ease matters?

In Belgium, we officially speak 3 languages; Dutch, French & German. But in reality, we’re mainly bi-lingual, speaking both Dutch & French. Most of us speak fluent English as well, so that can’t hold us back ;-).

Some national teams are apparently switching to legal names for the World Cup (eg much of Team Scotland has, with some retaining their derby names). Is Team Belgium taking a position either way on this (or is it unimportant)?

We didn’t take a general position within this matter, since a name is still personal. We have a couple of skaters who decided to play with their legal names, and that’s totally fine. Within Team Belgium, it’s an individual choice.

The Team Belgium Roster is: