The Future of Derby: China

Roller derby (and especially WFTDA-rules flat track derby) has been spreading across the world in recent years, as we’ve documented on this blog, via both analytics, and our Future Derby series.

One area that we have yet to cover is the substantially unrepresented region of Asia. While Japan has several active roller derby leagues, and their own umbrella organisation, this is thanks substantially to the presence of American Forces Overseas, who form the nucleus of those leagues, importing Roller Derby directly from the USA. As active service people tend to stay in their placement for some time, leagues like Kokeshi Roller Dolls and Devil Dog Derby Dames have a somewhat reliable core of skaters who can develop and pass on skills, despite the only slowly increasing fraction of native Japanese skaters involved. In Japan, the existence of the local RollerGame spin-off of Roller Derby also helps awareness, especially for Tokyo.

In other regions of Asia, the presence of Roller Derby is much sparser - there's no evidence of roller derby in India, or the south-Asian countries, and the Republic of Korea Roller Derby league seems to have vanished from the internet. In the most populous nation on Earth, however, Chinese Roller Derby is slowly starting to build up. We talked to the three extant Roller Derby leagues in China - Shanghai Roller Derby's Shang-High Rollers (Founders Afronaut and Koko Kabama), the first league in China from 2012; Beijing Roller Derby (Founders Hootin' Annie and Jay, Coach and long-standing member Courtney, who left BRD very recently, and PR head Izzy Pop) and Hong Kong Roller Derby (League founder and President Alison "Six" Gentry); both founded in 2013.

At present, all three leagues are mostly composed of American and European expats (Beijing even have a Scottish derby connection, via ex-Granite City skater Belledefluff). Such a high expat ration causes problems with turnover, as expats are also often highly mobile. BRD's Hootin' Annie told us that the "challenge is retention. We are mainly made up of expats and just about the time a skater is trained enough to be able to bout, it’s time for them to move. We have become a sort of farm team. We train ‘em up and send them all over the world to join other leagues."

Shanghai’s Afronaut agrees: "Shanghai life is crazy! You don't come here to do normal life things usually, you come here to work  a lot or you come here to party a lot. Most foreigners here don't stay long in the city (average 1 year) so we teach them to skate and then they're gone. The upside to that is we have ex-SHR in quite a few teams around the world. BAD girls (USA), Guadalajara (Mexico), as well as all over Europe. It's amazing!" And Six expressed the same problem from Hong Kong, "It's been a struggle to say the least, as life in HK is busy, and a lot of people are coming and going. Most of the girls we get are expats, so they might stay for a year or two, and then head back home, but we do have a stable group of girls who've been showing up since the beginning". 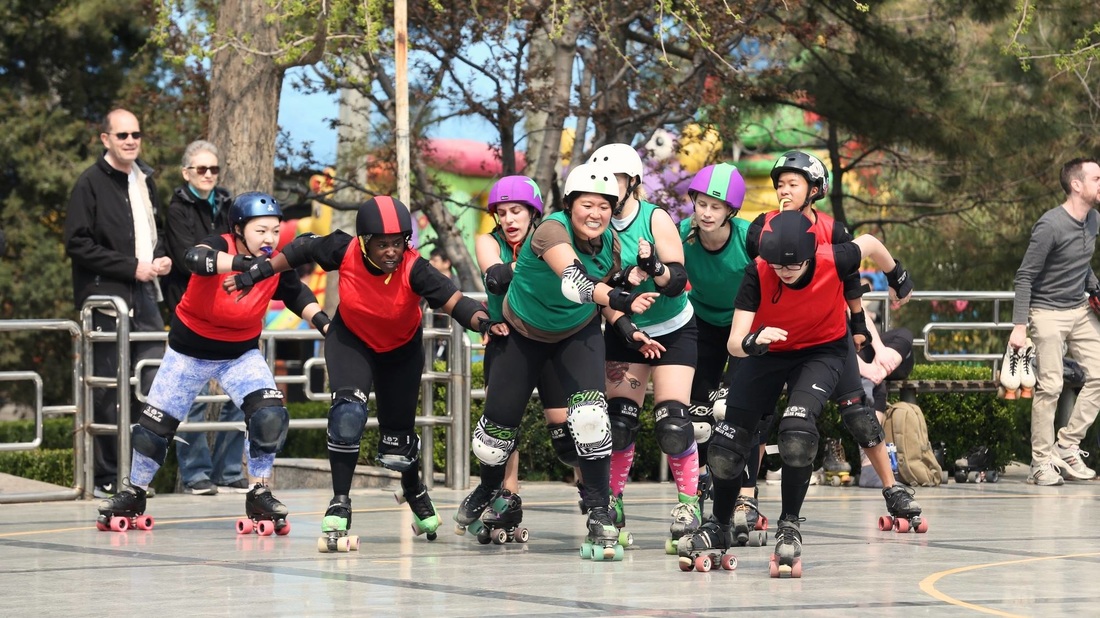 While all recognise the importance of recruiting a more stable base of Chinese skaters into their leagues, it's hard to promote the sport in a culture where roller derby isn't really known, as Izzy Pop notes. You can literally translate 'roller derby' as '轮滑德比[lúnhuá débĭ]', but that doesn't really mean much in Chinese, and "轮滑阻拦赛[lúnhuá zŭlánsài], which is more descriptive of the sport, meaning literally 'roller skating blocking competition'. The problem is that people don't know what roller derby is, so if you say either term, they still don't really know what you're talking about." HKRD's Six agrees "when recruiting, we usually say [that derby] is along the lines of rugby on wheels", a description that is familiar from European roller derby recruiting 5 years ago.

Without even a shared writing system (any European can at least read the words "Roller Derby", even if they don't speak English), it is that much harder to train and advertise the sport to Chinese nationals. Even the social networks are different to those in the West and need special attention: Beijing Roller Derby are "us[ing social networks] Douban, Weixin [Latin-script branded WeChat] and Weibo to help us spread the word. We also have begun work on translating our league documents into Chinese. Next up will be translating our website and other roller derby resources." This includes translating the widespread derby-specific language ("arm whip", "booty block") into natural Chinese equivalents, and even working on a translation project for the WFTDA rules themselves!

The Chinese approach to outside internet resources also causes issues - this article itself suffered some delays due to blocking of Gmail and Facebook during the communication process with the teams - which also makes viewing derby streams difficult.

As well as the language barrier, there are also cultural issues, as Shanghai’s koko kabama noted "The expectations of women, made by their peers and themselves are vastly different- to be single beyond your mid 20s means you are on the shelf, the traditional way means women are desperate for security and a steady, life. They certainly don't strap on skates and play a full contact sport."

Roller Derby has made progress in other places where the culture is not aligned with it - see the progress of the Middle-Eastern leagues - but it does make the process of recruitment also a process of cultural outreach.

This is also not to say that Roller sports in general are unknown in China, but they tend towards less aggressive expression. Shanghai Rollers’ have been "skat[ing] at the local skate places like skate parks and open areas. That way we meet the Chinese national skaters and we have quite a few friends who are on national teams like slalom and figure skating. Those artistic individual skating sports are the only ones that are big here." While some of the great American and European skaters currently come from established speed skating backgrounds, it's potentially the case that the artistic skating background of Chinese skating could bring entirely new expression to a native roller derby.

Despite the existence of a Roller Sports community in China, kit is hard to acquire in brick-and-mortar shops. Shanghai Rollers advise newbie skaters to look on Taobao, the Chinese eBay equivalent, and Hong Kong Roller Derby told us that the need to buy online "can discourage a lot of interested skaters as they want to try skates/gear on before buying it." This is perhaps a problem which has existed in most regions where Roller Derby is not established; most of the European skate stores were founded by Skaters who also had this problem, and wanted to solve it directly.

Despite these difficulties, all three leagues are growing and promoting, with Beijing and Hong Kong particularly active on Facebook at the moment. It will be difficult, perhaps, for derby to grow fast enough in China for a National Team (of Chinese nationals) to exist by the time of the next Roller Derby World Cups [2016 for Men, 2017? for Women], but that doesn’t mean that Chinese Roller Derby isn’t making moves to enter the international stage. At the time of writing, Beijing is listed as a tentative attendee at the first ever Asia-Pacific Derby Tournament, the Japan Open Roller Derby Tournament in 2016. However, the recurring issues with expat skater retention have caused them to have to pull out of the competition at this time. A selection of Beijing Roller Derby's skaters will still be attending in a spectating capacity, and we can hope that their attendance helps to raise the consciousness of roller derby in Asia as a whole.