Power of Scotland ready to get a moo-ve on!

Scotland's top skaters and their tartan army will really be getting a moo-ve on at the Men's Roller Derby World Cup in Canada – thanks to an amazing new logo.

A plethora of prospective logos were submitted for the contest to help brand Power of Scotland’s push towards the World Cup in Calgary next summer.

The logos were put to the vote and the top two sent into the orbit of professional designer Admiral Attackbar - of Interplanetary Print Syndicate. 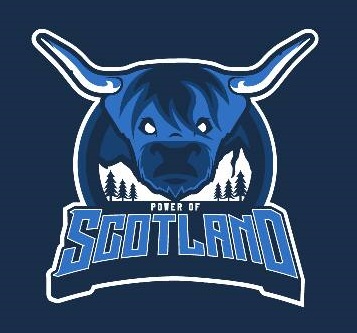 The winning logo can now be revealed and the Power of Scotland team can’t wait to rock (and roll) it with pride.

“We hope everyone loves it as much as we do. The new logo is the perfect expression of the Scots’ legendary spirit, strength, style and attitude.

“We can’t wait to hear what people think of the latest addition to the Scottish team – which is the culmination of months of hard work and difficult decisions.

“We received dozens of excellent designs initially and the feedback from skaters and fans was incredible. The vote was very close between the top two so we asked Admiral Attackbar to help us finalise the new logo.

“She did a fabulous job. We want to thank her and everyone who took the time to contribute their ideas – especially the winner, Andy Morris - and to vote for their favourite.

“The passion and creativity shown by all the people involved with Power of Scotland is a genuine thrill.”

A new range of merchandise – featuring the new logo – will be on sale soon, with t-shirts, hats and more going up for sale.

Meanwhile, the PoS training squad is working hard in preparation for Canada, with Head Coach Hannah Grant (aka Ginge) pleased by the inspiration and perspiration on show.

She said: “The attitude, energy and effort from the selected skaters has been excellent, with many travelling long distances to be put through their paces in drills and scrims.

“Everyone is giving everything they have in pursuit of their Power of Scotland dream – from the coaches to the skaters to the fundraisers to the fans.

“As well as working with their own leagues, our skaters are training and scrimming together once a month. I think we’re seeing the start of something very special.”

The selection committee will come together on Hallowe’en to watch a Scotland vs Scotland game made up of the training squad.

From there the 20-man squad for Calgary will be selected and will go on to train till the World Cup.

Visit www.facebook.com/PowerOfScotland for more information on how you can help the team on its journey to the World Cup.