The weekend of the 11th is another extravaganza for high level Scottish Roller Derby, with both Auld Reekie Roller Girls and Glasgow Roller Derby engaged in multiple bouts across the weekend, and Fierce Valley playing away in the continuing British Champs Tier 3 North fixtures.

Heading up the double-header, Auld Reekie's All-Stars are taking on Kallio Rolling Rainbow, one of Finland's finest teams.

After their usual impressive performance at The Big O in Oregon, Auld Reekie are riding high, ready for another challenge - Kallio are slightly higher ranked than they are (FlatTrackStats predicts a win for the Finns, albeit with some uncertainty). This will be a WFTDA Sanctioned bout and contribute to both teams' rankings, so it will be an especially hard-fought contest, as both teams will want to reach Division 1 (or remain in Division 2) of the WFTDA Rankings in order to qualify for Playoffs.

The other bout is no less exciting in its own way, marking the debut of ARRG's new 'C'-team, the 'All-Star Rookies'* as they take on Granite City Roller Girls B, the Fight Hawks!

Obviously, with a team debut, it's hard to make predictions as to the result of the bout; this will be a contest between Auld Reekie's new skater training and the experience gained by the Fight Hawks over the last year. (Having seen some of ARRG's rookies in "rising stars" bouts in the last few months, however, there's some very impressive performers there...)

Tickets on the door will be £8 (just £4 per bout), or £5 online via BrownPaperTickets. Concessions tickets will be just £6 on the door.

Meanwhile, Glasgow Roller Derby are apparently the stars of the show down in Oldham, as Rainy City Roller Derby are hosting a weekend of derby, in which Glasgow feature in 3 out of 4 bouts!

In a Scotland versus Wales playoff, Glasgow's A team, the Irn Bruisers, will be taking on Tiger Bay Brawlers' A; and their B team, the Maiden Grrders will also be facing off against TBB's B-Bombs.

FlatTrackStats predicts an incredibly closely-matched bout between the A-teams (the result depends on which team you give "home-team advantage" to). The B-teams are almost as close in FTS's predictions, although it looks like their stats very narrowly favour the Welsh team (albeit by only a few percent). With only one exception, match-ups between GRD and TBB have been hard-fought, high-level affairs, so we do anticipate some great derby here.

Meanwhile, Rainy City Roller Derby are scheduled against simply "Glasgow Roller Derby", which we might guess is the A team... Last time they faced each other, Glasgow came out with a convincing win; but Glasgow's significant team changes this year have FTS predicting a win for the home team this time around. Glasgow will have to pull out something special to keep the win record on their side...

Given the rankings of Tiger Bay Brawlers A, and Rainy City Roller Derby, these bouts also fill in a chunk of the higher-level UK matchups missing from British Champs this year. With the results from these games, we'll be publishing an "extended" BC Tier 1 ranking, extrapolating where some of the teams not competing in T1 might have ended up, this time around.

[On the Sunday, Kallio Roller Derby are also featuring in this derby weekend, so presumably there's some exciting train travel in Kallio's Sunday morning schedule...]

Speaking of British Champs, after an extended period hosted in Scotland, the Tier 3 North fixtures continue in the North of England, with Hallam Hellcats hosting a double-header of bouts. 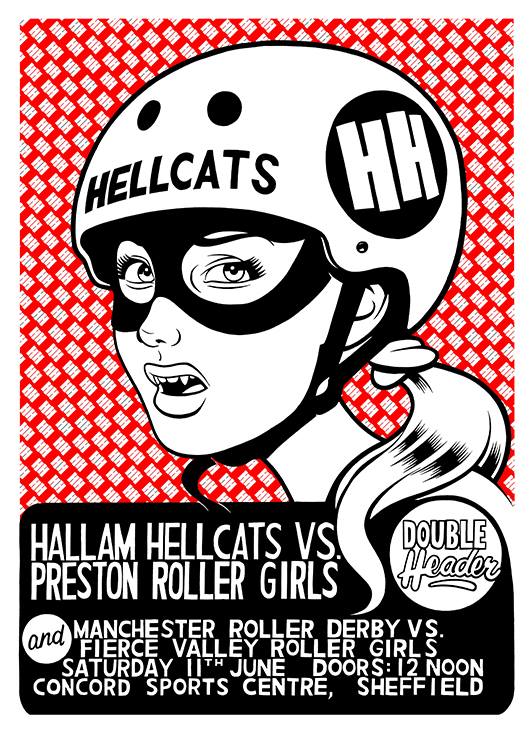 The hosts will be taking on Preston Roller Girls, while Scotland will be represented by Fierce Valley Roller Girls taking on Manchester Roller Derby.

FVRG will be hard pressed to defeat currently unbeaten Manchester, but a loss will keep them at the bottom of the table and in danger of relegation. Meanwhile, Hallam and Preston will be fighting it out to avoid the second-from-bottom spot in the table - there's not much to call between them, but FTS believes that home-team advantage gives the hosts a slight edge.

*the Auld Reekie current team naming scheme is a bit confusing - the A team are simply "All-Stars", whilst the B team append "Reserves" and the C team "Rookies". This makes it a bit hard to unambiguously form acronyms for the two, but we're working on this.