As we mentioned in our January round-up, the only announced bouts in Scotland in January are in the last two weeks of the month. In fact, by far the larger event is the closer, as the 21st sees Glasgow Roller Derby bringing Derby Se7ens to Scotland for the first time.

Like Sur5al, which Glasgow have also hosted previously, Se7ens is a condensed Derby format, inspired by Rugby Sevens which is a very successful variant of the Union game - the first Sevens tournament was held by Essex Men's Roller Derby, and is now an annual event. The benefit, of course, is that you can get more teams to compete in less time, and hence possibly have a higher density of fun. It's also an ideal way for skaters to ease themselves back onto track, before the competitive season really gets going...

Experimenting with the Derby Se7ens format to add even more 7s, the Magnificent 7s event sees 7 teams of 7 skaters each play 7 minutes of derby against each other (for a total of 21 bouts, and 147 minutes) to determine the victor*.

To celebrate this inaugural issue of what might become an annual event, GRD have also worked with well-known Scottish Derby photographer, Dave McAleavy to produce this themed poster: 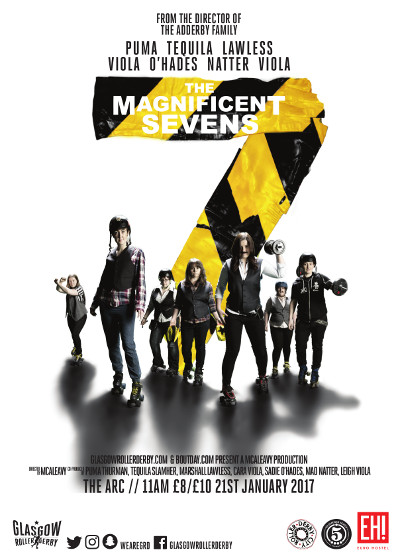 As is often the case with these intense formats, the event has drawn in a wide representation of skaters, with the following teams submitted:

Doors open at 11am with the first game set to begin at 11.30am, and are hosted, as always, at the ARC at Glasgow Caledonian University. Tickets are £8 in advance (from here) and £10 on the door, which is still less than 50p a bout...

*The conventional Derby Sevens, as run by Essex Mens, has 21 minute games.