As a democratic organisation, the UK Roller Derby Association undergoes a yearly AGM, in which vacancies for its Directorships can be filled by vote within the member leagues. The most recent AGM was held this month, 5th of June, and resulted in a particularly large number of changes to the Directorships, due to retirements and the filling of previously empty posts.

We're giving you a quick overview of the current Directorships and their holders, to help you get to know your organisation. 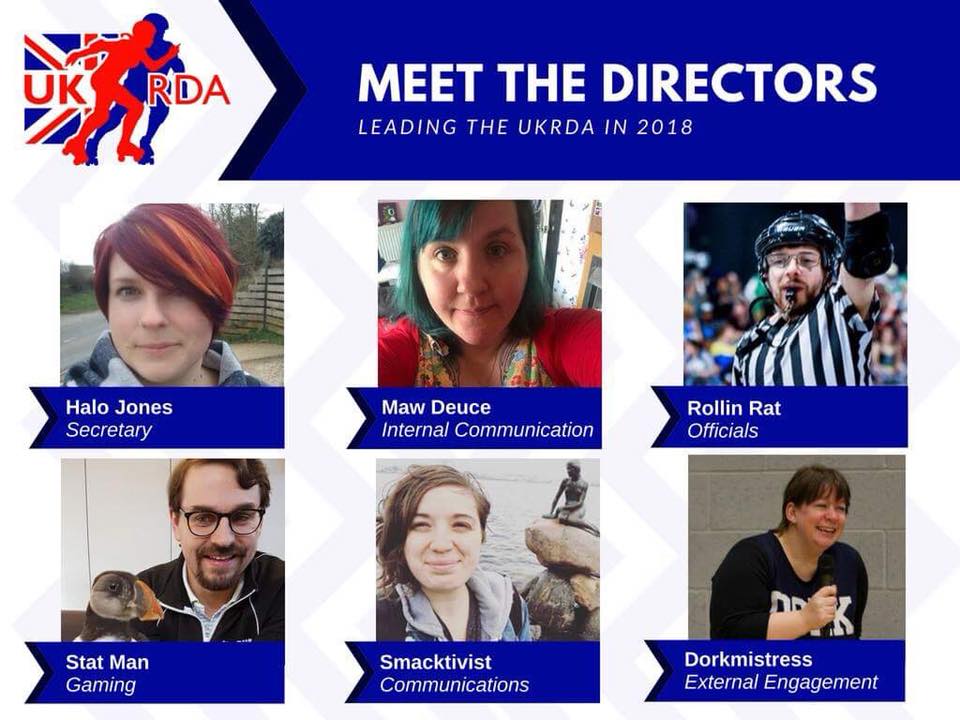 Halo Jones remains in the position of Secretary for UKRDA from before the AGM. Outside of UKRDA, she is well known in the world of NSOing around the Oxford area (especially for Oxford Wheels of Gory), and beyond. A nominee for the Talk Derby To Me NSO Listener Awards in 2017 and 2016, she has officiated at multiple high level events, including the 2017 MRDA Championships, and both the Roller Derby World Cup and the Men's Roller Derby World Cup 2018.

Maw Deuce continues in her role as Director for Internal Communication from the last elections. The longest term member of the UKRDA family, Maw previously served as the UKRDA National Squads chair, responsible for interactions with and support of the affiliated national teams, and has held additional roles before then. Outside of UKRDA, Maw is a member of Glasgow Roller Derby, and a referee and official.

Rollin Rat continues as a Director from before the AGM, moving from the position of Director of Policy & Strategy to Director of Officials. Outside of UKRDA, he is a Referee for Central City Roller Derby, Birmingham, and has refereed at many high level events, including the Roller Derby World Cup 2018.

Stat Man has a long history in Roller Derby, as both an Announcer and an Official. As well as starting one of the first attempts to rate and rank European teams, he was one of the individuals responsible for establishing the ongoing Men's Roller Derby World Cups, of which he remains the Chair of the Organising Committee. He may also have been involved in the short-lived attempt to have a roller derby team based in Sealand. He has also continued to announce at high level events, including both World Cups this year. Stat Man has also previously served as Executive Director of Sanctioning and Games for the MRDA (2017).

Smacktivist is new to the Director of Communications role. She hails from Cambridge Rollerbillies, where she's currently Line Up Manager for their B-Team, the Punt Rockers.

Dorkmistress has a very strong history in Roller Derby, as both an Announcer and an Official. She has previously Managed several iterations of Team Wales Roller Derby, as well as announcing for Swansea City Roller Derby and announcing and officiating for South Wales Silures; she's also been seen announcing across a gamut of high level events, including the most recent Men's Roller Derby World Cup, and Newcastle Roller Girls' EuroClash tournament. As well as UKRDA External Engagement, she currently holds the position of Roller Derby Nations Committee Regional Representative for Northern Europe, representing all the World Cup Nations from that region.

Buckfast is new to the role of Head of Tech (which is not a Directoral role, and has been semi-empty since the last AGM). He's relatively new to Roller Derby - having recently begun Bench Coaching at York Minxters.