The Mexican Torneo Nacional de Roller Derby, run by the Asociación Mexicana de Roller Derby, is one of the longest running continuous national tournaments in Roller Derby. Since 2012, the tournament has selected teams from across Mexico for multiple fixtures to determine a champion; and in more recent years, a full ranking system (derived from WFTDA rating calculations) has been applied for cut-offs into the Division 1 and 2 categories.

The tournament proper begins in August of each year, and so we are rapidly approaching the 2018 edition. In anticipation of this, we're bringing you a quick overview of the event, and the teams involved.

The top 12 teams in the AMRD ranking, at the time of selection, are sorted into Division 1, with the chance to play for the Championship. In this case, one team (Ovejas Negras) was forced to withdraw from the competition this year - allowing the 13th ranked team to replace them.

Division 1 is run as two "playoff" fixtures, each with 6 teams, selecting the top placed teams from each in the Final fixture, to play for the top spot. This year, the Playoffs will be hosted in Monterrey (by Monterrey Roller Derby), and Juárez (by Medias Rotas Roller Derby). 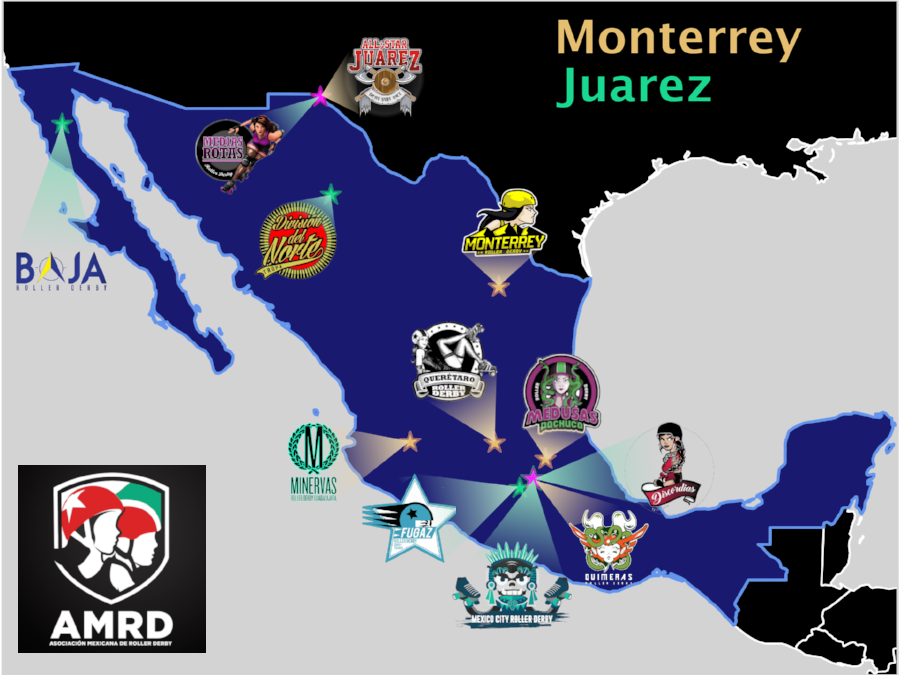 The Division 1 teams cover almost all of Mexico, except the extreme East, with their distribution roughly matching the population of the country.

Monterrey Roller Derby and Mexico City Roller Derby have both won the Championship at least twice over the past 6 Nationals, with Mexico City's wins in both 2016 and 2017. However, at this point in the season, fellow Mexico City based team, Quimeras (of Liga Cuidad de Mexico Roller Derby, LCMRD) are just pipping them in the rankings, making this a pretty contested championship. The alternating seed placement for Playoffs has placed the Quimeras in Monterrey's group, and outside MCRD's group, which will give the current champions some breathing room until the finals themselves.

Third in the rankings so far, All-Stars Juárez, have never won the Championship to date, and will be hoping to pick up a win for the northernmost city in the AMRD. Their placement in a group with Quimeras, Monterrey and another former Champion, Minervas, will make this a tough battle. Their fellow Juárez team, Medias Rotas,  have relatively less experience, and a weaker season (we have only 2 bouts on record this year in Flat Track Stats, against fellow D1 teams Division del Norte and Minervas).

Of the remaining teams, Baja California's Baja Roller Derby and Guadalajara's Minervas are the only other teams to have won the championship, and are seeded into different groups. Minervas have the challenging group with a total of three former champions (including themselves), whilst Baja face the most Mexico City centric group - although at least their travel costs will be moderated, given the closer proximity of Juárez. With Baja currently the second lowest rated and ranked team in Division 1, it will be a big ask for them to make the qualifier for the Finals - Minervas are having a much better year (in a close 5th place), but qualification will require them to defeat All-Star Juárez in their home city...

We should not forget the currently fourth-place Division del Norte, of Chihuahua - whilst they haven't won the Championship yet, their current rating places them close to Juárez All-Stars in third (and just ahead of former Champions Minervas). As the second strongest team in their group, they are very likely to qualify - but could easily cause disruption in the finals if they do.

The unexpected addition to the Division 1 list, Fugaz Roller Derby, of Toluca+Mexico City, replace Ovejas Negras, effectively getting a free promotion from Division 2 for the tournament. We assume that they'll be anxious to capitalise on the opportunity to prove themselves against their group - as a relatively new team (formed in the past year from Animas [Toluca] and Valkirias [Mexico City]), they have everything to prove.

Division 2, meanwhile, sees the next 5 [14 to 19 rank] teams fight it out in a single fixture to determine the top of their group. 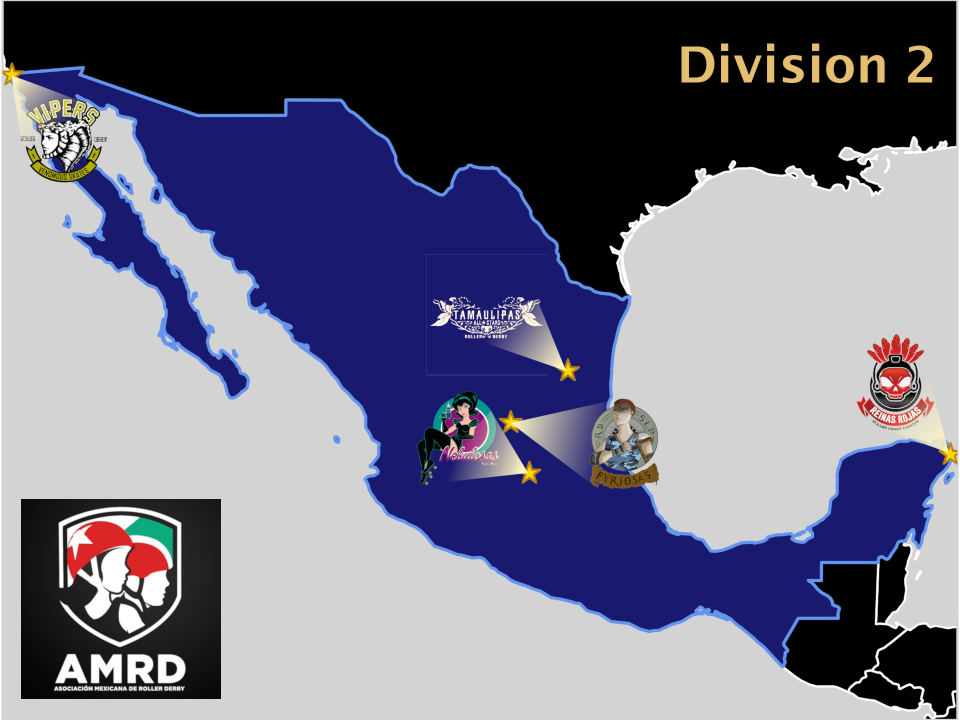 Division 2's teams cover the extremes of Mexico's geography, from Tijuana's Vipers, on the USA/Mexico border to the extreme West, to Cancùn's Reinas Rojas, to the Eastern extent of the country. The remaining three teams are clustered in the densely populated central region of Mexico; Tamaulipas, Nebulosas of Queretaro, and Furiosas of San Luis Potosí. Tamaulipas Roller Derby, as well as being one of the newer teams to the Nationals (being formed in March this year, as a collaboration between Fairy Dust Roller Derby and Jaibronas Roller Derby), is also hosting Division 2 this year, in October. So far, their performance has placed them at the bottom of the rankings for Division 2, but they have been improving rapidly as their team and coaching gels. With the home-team advantage, they could be a wild-card here.

Short of an upset, however, the safer money is on a very close battle between Cancún's Red Queens and Queretaro's Nebulosas' space-adventurers for the top spot in the Division. The two teams are exceptionally closely rated in the official AMRD ratings - although FTS has very little data about the Red Queens to day - and so this should be an exciting matchup.