We're taking a break from Latin American tournaments you should be aware of, to highlight a tournament a bit more local to us, as it's a special year for it this time around.

Since 2014, Newcastle's Tyne & Fear Roller Derby have hosted the "Men's European Cup", a late-autumn European-level MRDA-sanctioned tournament, although it skipped a year in 2017 (being sort-of-replaced by the first ever EuroClash). With the 2018 edition coming up in November 17th this year, we're hitting a sad landmark: this will be the last edition of the tournament hosted in the Walker Activity Dome, as a transfer of ownership makes continued booking impossible.

This means that 2018 is your last chance to experience the side-benefits of previous MECs, including exposure to a large number of friendly (and now kinda famous) dogs, in the canine-friendly venue. 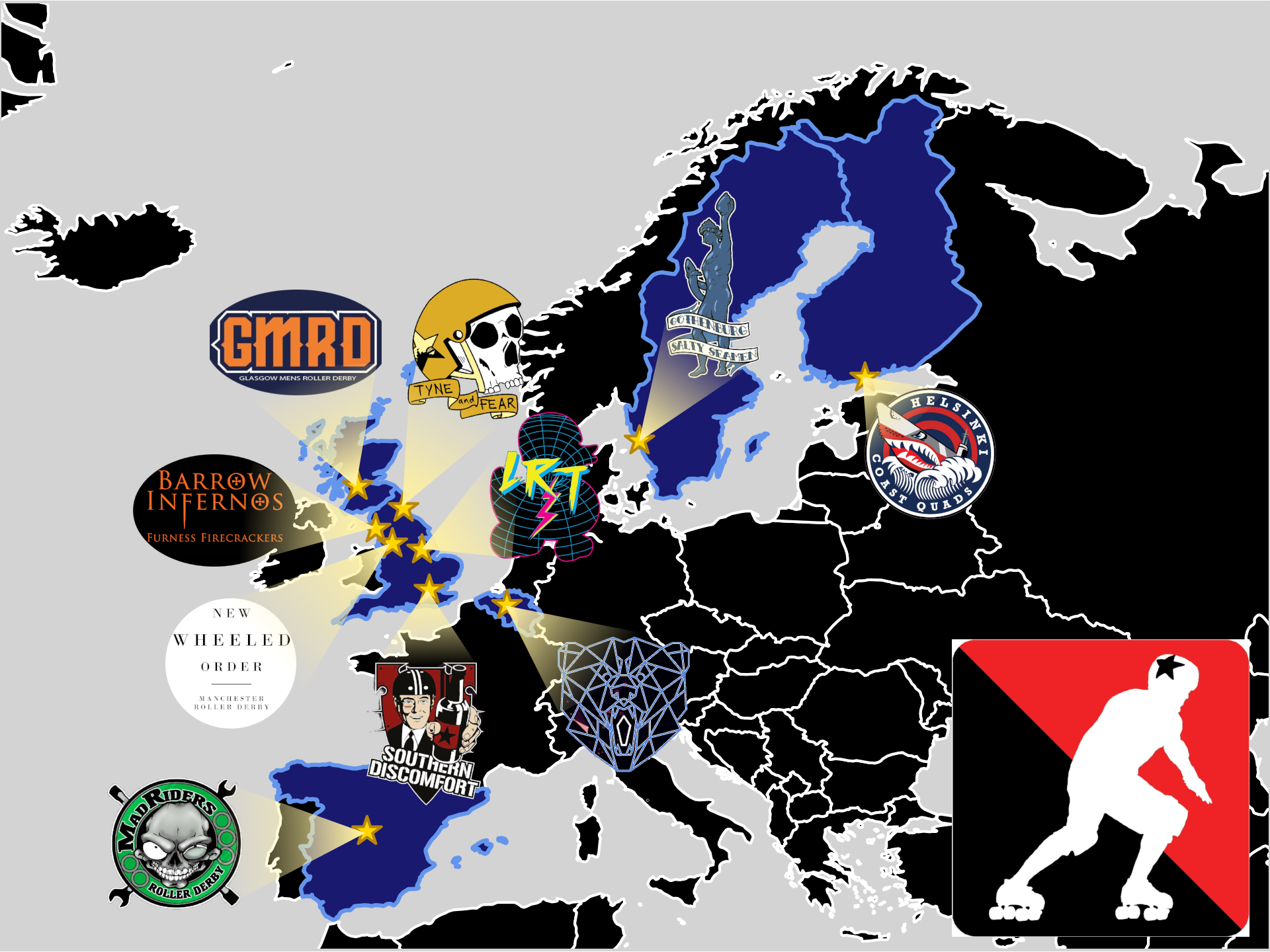 Of these, Southern Discomfort, Manneken Beasts, MadRiders, Gothenburg and Lincolnshire Rolling Thunder are repeat attendees (along with the hosts!), the remainder are new this year, representing a shift towards UK-based teams overall.

MEC's schedule - unlike its WFTDA-aligned fellow tournament, EuroClash - is a seeded single-elimination tournament with single consolation games for first-round losers, two days being just enough time to fit the 13 games needed for that structure with 10 teams.

With British Champs giving three of the higher level competitors (Barrow, NWO and Tyne & Fear) games against each other already this season, and MRDA playoffs qualification games generally making the UK crowd well connected, it's fairly easy to get a handle of on the overall distribution of the field - barring sudden surprises. In particular, New Wheeled Order have had an absolutely brilliant year, as they continue to build on their triumph in 2017; they've already won the British Champs' "MRDA-side" Championship title for 2018, and also autoqualified for MRDA Champs before the European Qualifiers on 18th August (which they're also hosting, but not competing in!).

In fact, MEQ will be a very good sample of what the high-end of MEC will look like, as four of its five competitors are shared with this competition (the exception being Nottingham Roller Derby's Super Smash Brollers).

Barring upsets on the 18th, the only team likely to stop NWO from taking the win here in Newcastle is also the only other UK team to have a automatic qualification to MRDA Champs: London's Southern Discomfort. With an unbroken series of wins at MEC, London's finest will be expecting to retain the championship this time as well.

At the time of writing, Glasgow Men's Roller Derby are in the middle of application to MRDA; as part of this, they've played a number of closed and open bouts against those above teams, particularly Southern Discomfort and Barrow Infernos. In general, GMRD have maintained their relative rating (in SRDRank) compared to their competitors, a solid middle of the pack in terms of attendees. GMRD's team to beat is Belgium's Manneken Beasts, who represent the mid-point of the field proper. we hear from other sources that they have been successful, but GMRD themselves have not publicly announced this.

In 2016, Gothenburg and MadRiders were both relegated to the consolation bracket, after the slaughter-pairings placed them against high seeds. Since then, both teams have improved in strength, judging from their records in FTS. (MadRiders are not MRDA members, and so do not have an official rating in Flat Track Stats - but SRDRank places them as generally competitive with the closely-matched lower half of the field in general) Gothenburg's performance increase has been more limited, and mostly driven by recovery from a difficult 2017 - their first year of MRDA membership.

Helsinki Coast Quads are the wildest card of the lot, having only a single game on record in Flat Track Stats (against the similarly low-on-stats Kouvola). We can expect to learn more about their abilities as they host their own, first, tournament in September (Shake Me Up When September Ends). With fellow MEC competitors Glasgow Men's Roller Derby and Manneken Beasts making up the three in this round robin, this will be another exciting preview of the Newcastle tournament.

The 2018 Men's European Cup will be held 17th-18th November, in the Walker Activity Dome, Newcastle Upon Tyne.