It's been a while since our last update on happenings with Rolla Skate Club's Short Track Roller Derby rules, so we thought it was overdue another post. There are exciting things to write about, across the world, as well, so we'll break this up region by region! Because of the prevalence of Facebook (and the fact that its Events are one of the few useful things about it), all links to events will be there; but we'll include enough info for you to get to the event without needing anything owned by Mark Zuckerberg. Where possible, we link to league websites, or to their Instagram when it isn't. 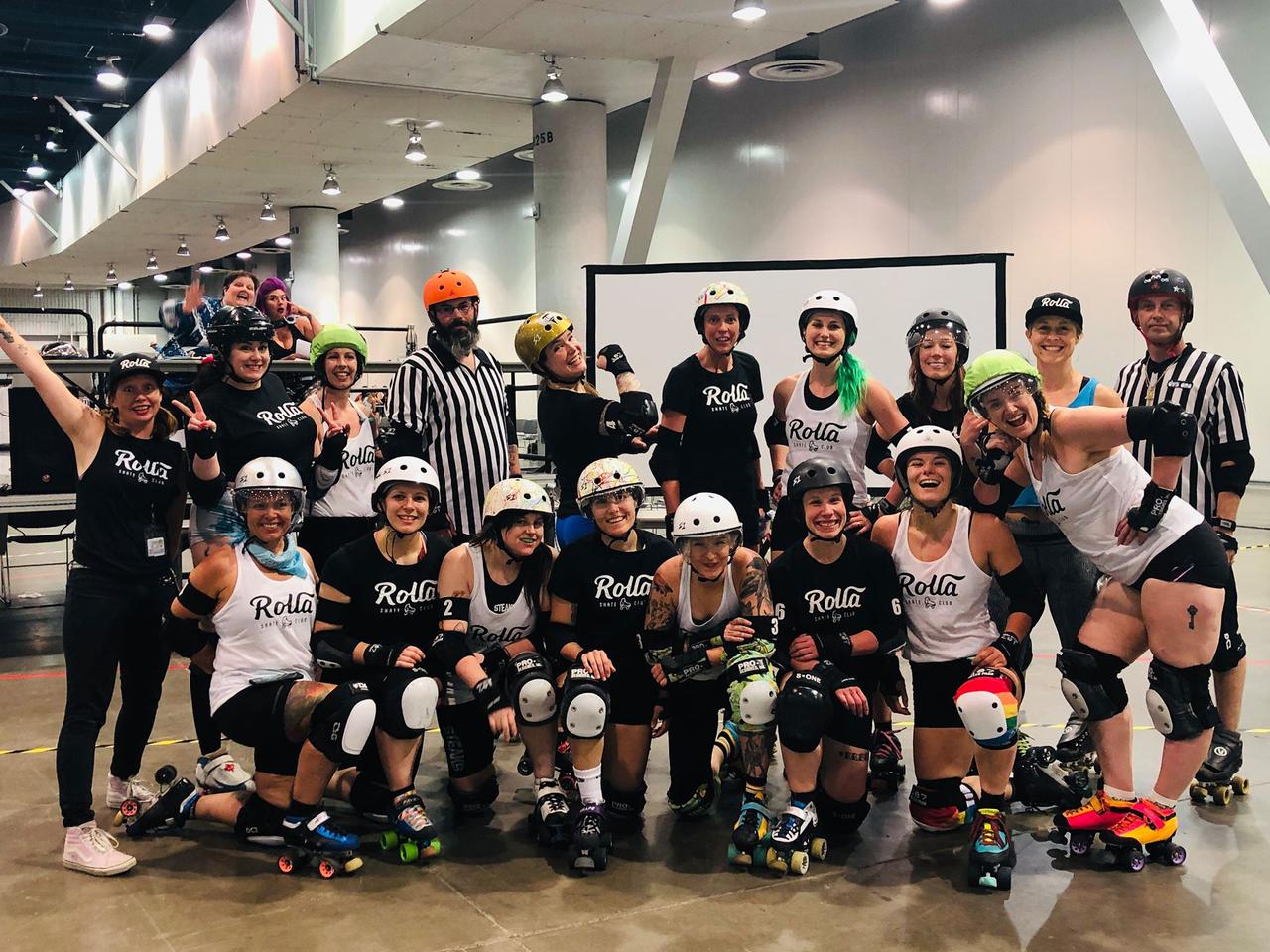 What with Rolla Skate Club themselves being based in and around Vancouver, there's been a Short Track presence in Canada from literally the word "go". Rolla Skate Club have been running Roller Derby social scrimmages, bootcamps and other events weekly or monthly since the ruleset debuted; and many of these use the Short Track ruleset they invented for this purpose!

Additionally, since our last update, Rolla Skate Club held a public Short Track Roller Derby bout on the 14th September in Vancouver, giving some of their newer skaters their first time in front of a crowd. Despite the weather doing its best to stop them (and flooding out their original venue), Stop Hammer Time narrowly defeated Ice Ice Baby at their secondary venue.

Of course, as we trailed earlier in the year, Rolla Skate Club also returned to Rollercon this year - one year after launching Short Track to the public at Rollercon 2018. This year they had an extensive schedule of Short Track events - an introductory workshop, and two public games, one of which was entirely rostered with WFTDA D1 skaters!

After the introductory workshop, attendees were asked for feedback. Positive feedback was along the lines we've seen reported from most skaters experiencing Short Track Roller Derby for the first time:

"I like how equitable it is - everyone jams, everyone is responsible for their own penalties"

"It's really great for team communication. You only have one friend so you have to talk to them!"

"Only needing 2 on skate officials is awesome!"

"It wasn't as scary being a jammer because you only had 2 people to get by!"

In addition, the obvious application of Short Track Roller Derby to rookie training came up: "I like that this gives a good stepping stone between Rookie training and scrimmaging with WFTDA rules.".

Perhaps most important, though, was this realisation:

"When you are out there it just feels like playing roller derby."

But it's not just Rolla Skate Club, of course, as leagues across Canada and the USA have been trying out Short Track Roller Derby:

For example, later this month, Fort McMurray Roller Derby League , Alberta, will be taking their first steps into public Short Track events, with a triple-header home teams tournament all in one day! The league have been practising using Short Track rules for a while, and this is their chosen time to open it up for spectators.

This event will run from 6:30pm on 26th October at the MacDonald Island Field House #1, Fort McMurray. 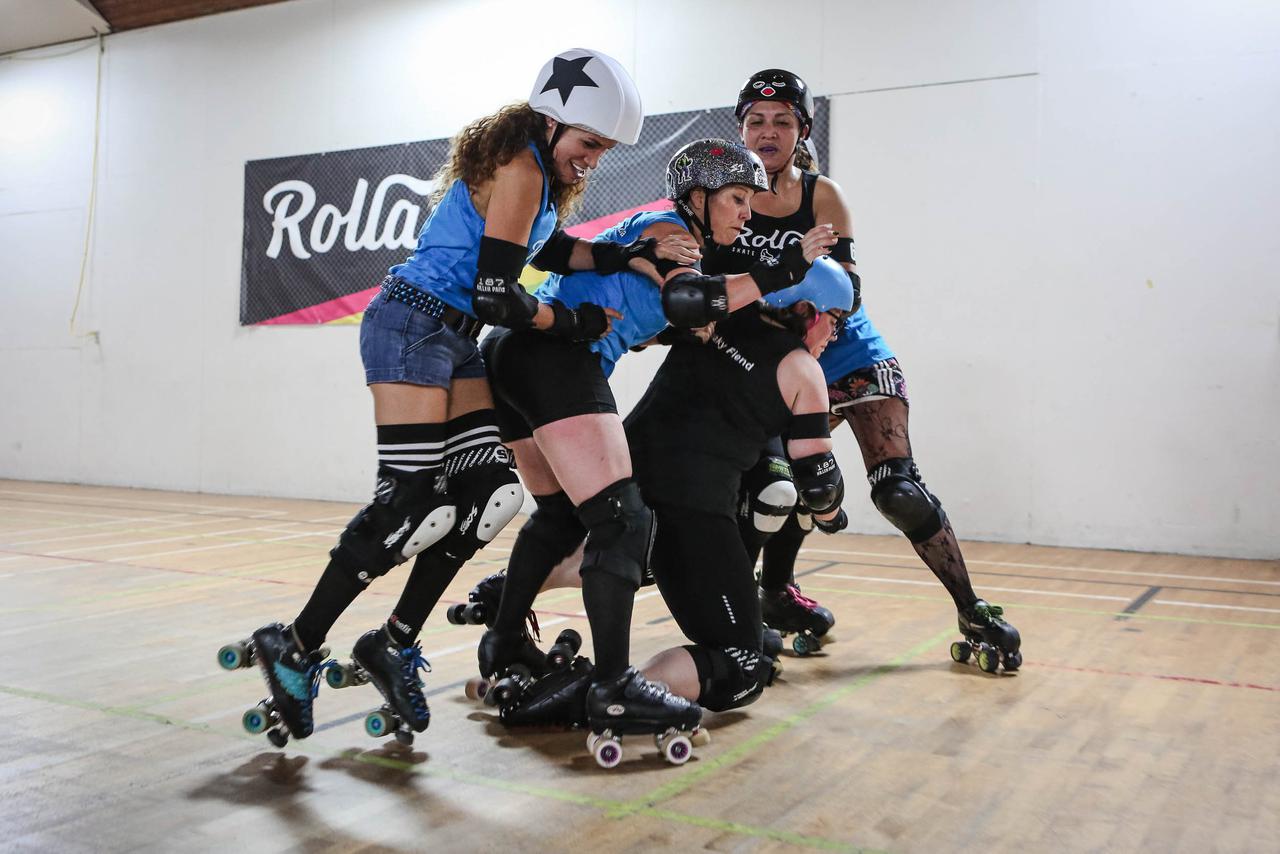 In Argentina, as we reported at the time, Vendaval Roller Derby hosted a Short Track demonstration and test as part of their anniversary bootcamp. For this event, the Short Track rules were translated into Spanish with the assistance of 5 Segundos and the Comodoro Rivadivia based LP: Entrenamiento en Patin . (This makes the list of languages with Short Track Translations now: English, Russian, Polish, Arabic and Spanish!)

We have a writeup of the results of the test provided by LP; in general, it seems to have been very successful (except for needing to be stopped early due to exhaustion from some skaters). This exhaustion was because the teams played had extremely short rosters of only 4 skaters a side; this would be equivalent to playing a WFTDA-rules game with a roster of 7!

The conclusion of the test was that Short Track Roller Derby was a useful ruleset to allow smaller or younger leagues to play derby faster; to begin teaching derby for newer skaters (as it's easier to pick up, and the yield system allows friendlier learning); and that the fact that all skaters have to participate in all positions was a positive change.

On the back of this successful outreach, future Short Track events are being planned in Patagonia, for later this year; but they are not ready to be publicly announced yet. We'll bring them to you as soon as they are confirmed.

Whilst we know there's Short Track in mainland Europe (for example, Copenhagen Ladybugs have been experimenting with it, and both Russian leagues - St Petersburg Roller Derby, and Raptors Derby Moscow - use it for some events, whilst Poland's Chrome Sirens have hosted public events with the ruleset), the two upcoming events we're aware of are both in the UK, and on the same day!

Following up on their successful Short Track Experiment, and the subsequent Short Track Scrimmage, ALL IN: Community Roller Derby are hosting a

No / Low-contact Short Track event, on the 20th October, at Threeways Sport and Leisure, Halifax, from 2pm

this is aimed at providing newly mins-passed, or near-mins-passed skaters an easy and comfortable way to get Roller Derby experience. The lower team size, and more collaborative rules, are less intimidating, and easier to understand, to new skaters than a full WFTDA rules scrimmage; and with a low-contact variant, it's safe for skaters with less-than-mins skillsets. (There is a lower-bar applied for skaters here, but it's easier to achieve than WFTDA mins, which are only intended for Charter Team skaters anyway!) 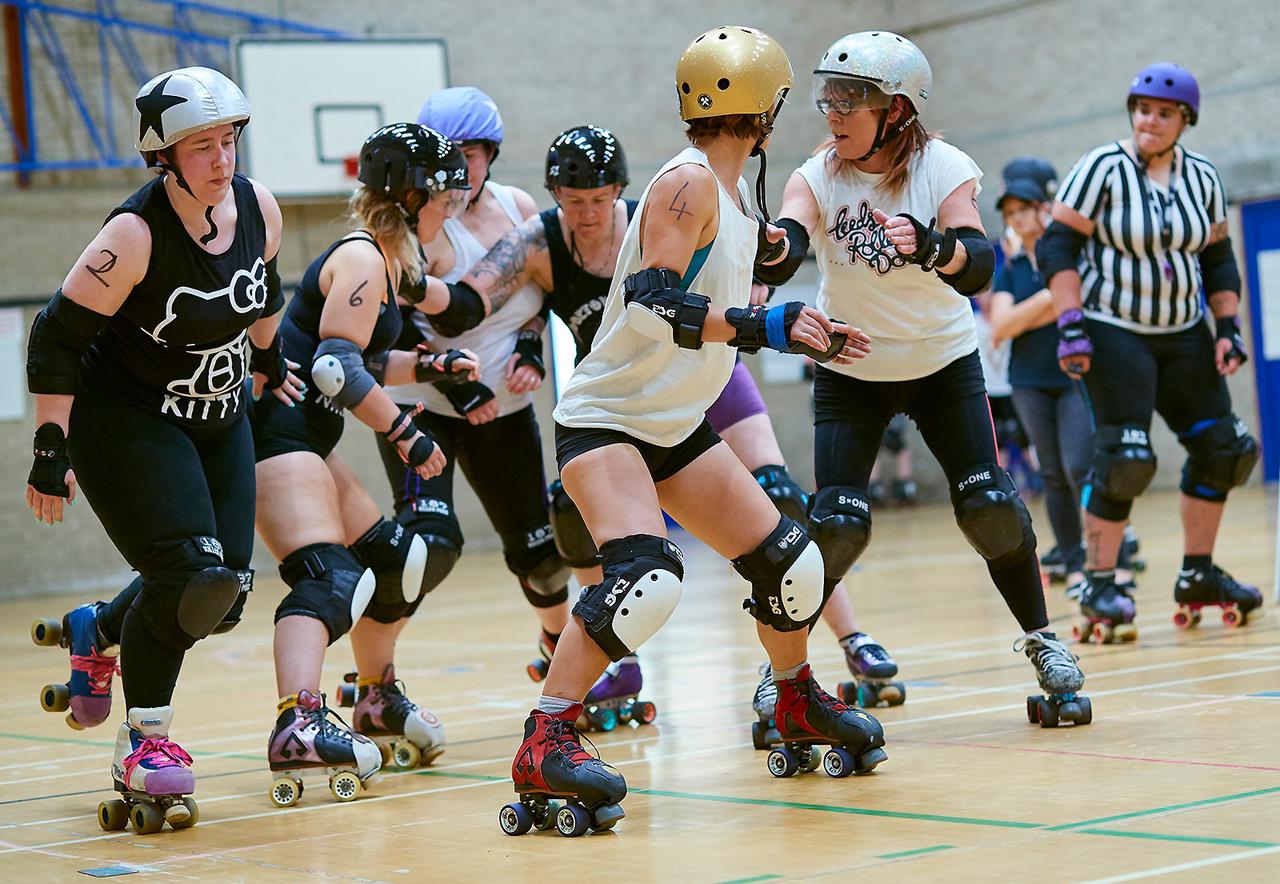 Meanwhile, down in Worcester, the Worcester Wyldlings have been interested in Short Track almost from the start; and they're now ready to hold their first open event:

a Short Track Scrimmage , also on the 20th October, will be a combination introduction to the Short Track ruleset, and an open scrimmage with those rules. We know that there were quite a few people from the south of the UK who were unable to travel up to the ALL IN sessions, so this location will hopefully make the ruleset more accessible to them.

This scrimmage will be held at Tudor Grange Academy, Worcester , starting at 3pm. Tickets are £5 a person, payable by paypal (via the event page linked), or in cash on the day. (Referees and NSOs are free!)

This is also a bit of a testing of the waters: The Wyldlings are interested in hosting a larger, mini-tournament later in the year, if this introductory scrimmage is a success.

Asia and the Middle East

Short Track Roller Derby continues to develop in Asia and the Middle East:

UAE Roller Derby continue to train with both Short Track and WFTDA-rules, without modification to either; we're not sure how their open practice sessions, ongoing, work with regards to this.

After the successful bootcamp hosted by Hong Kong Roller Derby, we're not aware of any further activity in China. However, a short video documentary about that bootcamp is available on the Chinese video hosting service Youku, which we've embedded here:

OH! Roller Derby (Korea's only Roller Derby league, based around the Osan Humphreys USAG base) have taken strongly to Short Track, and held several public and internal scrimmages with the ruleset. Their upcoming public game on the 19th October is played under Short Track rules. (This is a suitably spooky-themed event for close to Halloween, and has a Monsters versus Aliens team theming.)

This is not standard Short Track Rules - OH modify the ruleset because of a desire to let their skaters more easily play WFTDA rules when they transfer away. The upcoming scrimmage is... possibly free entry... and starts at midday at the Turner Fitness Gym, USAG Humphreys.

Over the past year, both Durban Roller Derby and Cape Town Rollergirls have found Short Track rules to be a useful addition to their toolset when planning public games.

On October 19th, Cape Town will hold their third such event (and 4th Short Track bout in total), as always paired with a Roller Disco.

Short Track helps both Durban and Cape Town to hold more events, with its smaller roster sizes and reduced officiating requirements; but the shorter duration and lower complexity of the game have also helped engage spectators. (Plus, having a 30 minute game before a Roller Disco means that most people will turn up that 30 minutes early to see the entire game.)

Cape Town also try to couple their events with a theme - in this case A Tropical Affair - and hold them on Friday evenings, to get the post-work-week crowd.

As always, their event starts at 5pm, and is hosted at: Sunningdale Sports Complex, Waterville St, Milnerton Rural, Cape Town.