This weekend is another busy one, so we're splitting into this (up to Saturday) and the later (Sunday and Monday) update to fit all the good things in. As well as a second WFTDA Playoffs showcasting Sweden, and giving the UK it's second chance at a Champs place, there's equally exciting action in the USA for Brussels Derby Pixies in California; the finals of Victoria's Statewide Stampede tournament in Australia; the start of Finland's Suomi Cup for 2019/2020... and much more! 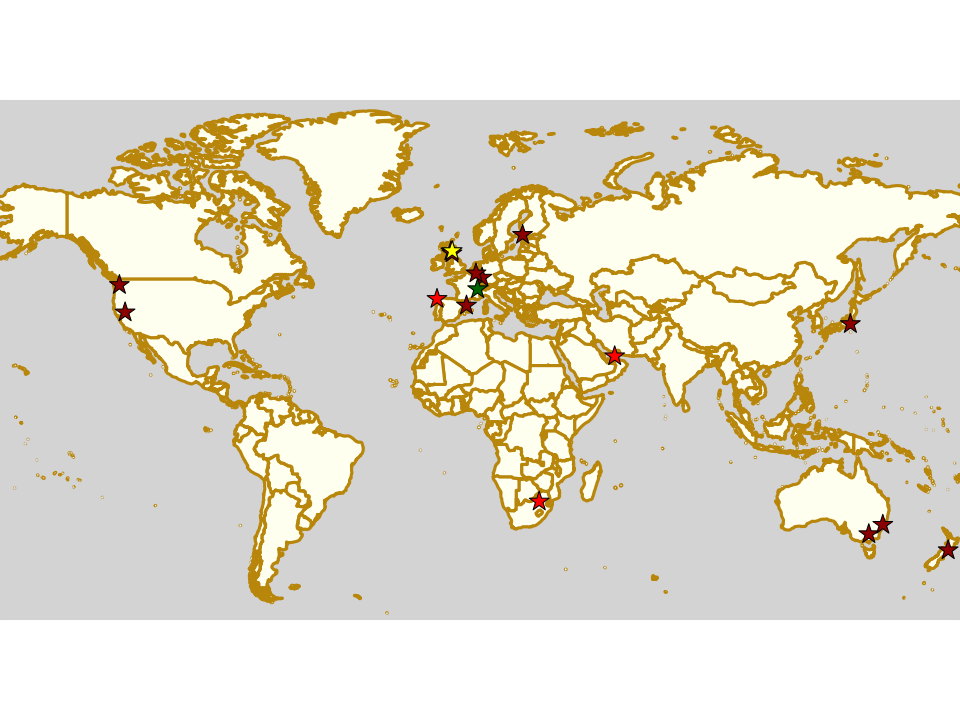 Richter City Roller Derby host a double header event, with a home season game and a interleague as well!

North East Roller Derby host the Grand Finals of this year's StateWide Stampede, Victoria's state tournament. By this point in the season, all of the teams have been sorted into 2 position bands, and the quintuple header event sees the pairs play off for 7th, 5th, 3rd, and of course 1st place position; as well as an opening Low-contact scrimmage as part of SWS's commitment to building and developing derby.

Kamikaze Badass Roller Derby face Tokyo Roller Derby's Neon Roller Monsters as the 2019/2020 edition of the mysterious 4x4 Roller Derby Tournament kicks off. As we mentioned last season, it's been extremely difficult to get information in any detail about this tournament series, other than that it seems to be a Sur5al or Roller Derby Sevens like short-format endurance ruleset, and involves the leagues around the Tokyo-Yokohama metropolitan area (regardless of the ruleset they endorse, individually). We only know of this fixture due to a short-lived "story" post on Kamikaze Badass' instagram account, which we've taken a copy of and hosted here for easier reference.

UAE Roller Derby host a Jammer Clinic as their season starts; an intensive intermediate/advanced session on jammer skills. This is open to beginners for observation, and some participation (including coaching oversight). The Facebook event lists it as being all weekend, so we've listed it as such here.

P-Town Roller Derby are working with Sumo, a local band, to provide more skate experiences, starting with this open skate at Thrashers Skate Park. We're interested to see how this association develops in future.

Dirty River Roller Derby host the first fixtures for the 2019/20 season of the Finnish national Championship, the Suomi-sarja. This is a Division 1 and "SM" (Elite division) triple header featuring, for the first time, two entries from one team, as the hosts enter their A and B teams. Also returning from last year, is the cup's only non-Finnish competitor, Russia's White Night Furies from St Petersburg.

Kaiserslautern Roller Derby (who rebranded earlier this year from "Rollergirls of the Apocalypse"), host an exciting double header event: an international game against Reims, followed by a "mixed" exhibition game.

Genéve Roller Derby United host the fourth edition of their popular combination of cheese and Roller Derby: Track'lette IV! This is an 8 team Sur5al tournament, run entirely in French, with the evening set aside for post-tournament raclette.

Dundee Roller Derby host an Open To All genders "Graduation Scrim". This is a chance for all newly-mins-passed skaters to celebrate with a proper scrimmage, alongside Dundee's own gradutes of min skills. This is also open to skaters who are almost passed mins skills (as long as they're only missing backwards laps, and can pass at least 25/5 (even if they can't hit 27)).

Auld Reekie Roller Derby are warming up for the European Continental Cup with the first bout in a double header; the second showcasing not just ARRD C, the ASTROs, but also London Roller Derby's new D team who are currently playing under the extremely accurate name of "London D Team".

Fair City Rollers host a second bout this year, as they take on Livingston's finest, the recently-rebranded New Town Roller Derby, in a bout planned for a very long time.

Barcelona Roller Derby host an international bout, the day after their recruitment day, as the new season starts up in Spain.

As Brigantias meanwhile, at the other end of Spain, are hosting two events: the return of their traditional Summer Camp outreach day for interested skaters, which runs from 11am to 7pm...

... and then their 7th birthday celebration in the evening, marked by a screening of the Roller Derby documentary, "THIS IS DERBY". (free entry)

Also of interest, due to their attendees:

Sierra Regional Roller Derby aren't intimidated by the other international event on US soil, as they host the 8th edition of their Deep Blue Derby Tournament, international by virtue of hosting Brussels Derby Pixies as one of the competitors. Brussels have been fundraising for much of the year for this tournament, so we hope they do well!