This weekend's highlights are back to our two update format.

We've broken our rule slightly for Germany this weekend, as it's important not to miss the Mine Monsters' birthday game, but also it's a good weekend for the German Bundesliga in Erfurt. And as usual there's so much stuff in France, we're giving them two entries for two two-day events... 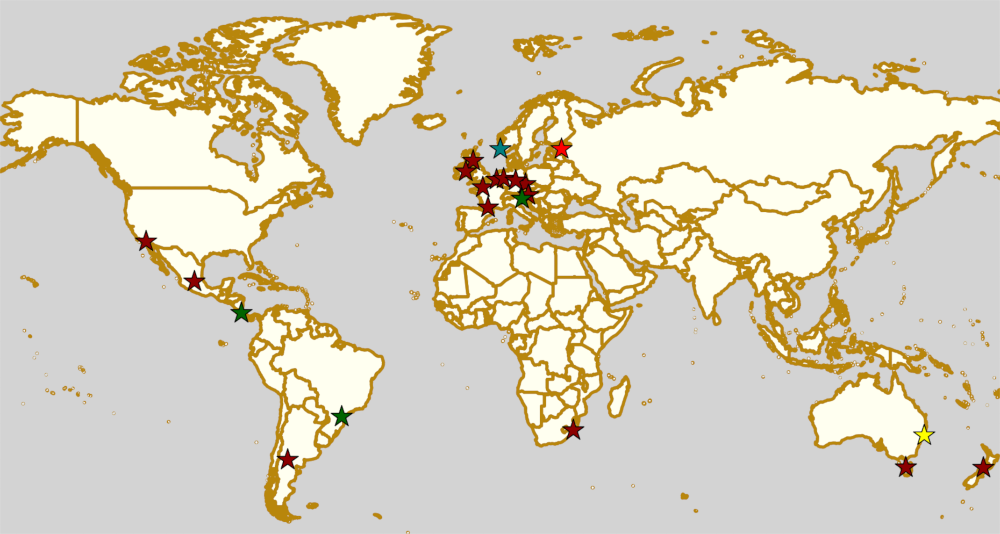 Nelson Bays Roller Derby host a double header of New Zealand derby for their A and B teams!

Van Diemen Rollers host the first ever fixture in the new Tasmania Roller Derby Tournament for 2019! This new initiative is a 3 fixture tournament between the three leagues of the island, resulting in a champion by the middle of October.

Dust City Rollers host a return bout against Slovenia's finest from Roller Derby Ljubljana - they've never defeated the Slovenians, but maybe at home they can break this trend!

The Banshees of Roller Derby Udine, are hosted as part of Sportiamo 2019, with a Roller Derby showcase to promote the sport. (Sportiamo is a multi-day Udine-based sporting event, featuring all the sports in the region - especially football and volleyball.) (The Banshees also have an open day on the Sunday to allow anyone excited by this showcase to join up.)

Roller Derby Erfurt host a triple-header of Roller Derby action, including not one, but two Bundesliga bouts!

The Mine Monsters of Oberhausen are celebrating their 4th birthday with a "co-ed" (by which they mean Open To All genders) bout against Nijmegens's Roadkill Rollers. We're also promised "a few surprises" along with this bout, so it's probably worth turning up just for that...

Oil City Rollers host the first ever Norwegian National Championship in history, as part of the NM-veka, a Norway sports wide broadcasting collaboration between the Norwegian national broadcaster (NRK), the Norwegian Olympic and Paralymic Committee and the Norwegian Confederation of Sports. The full schedule is not available at present, and we are promised a livestream of the event.

Antwerp Roller Derby host the 2019 edition of their regular Summer Sur5al tournament. This will be a 14-team Open-To-All genders tournament, run as a round robin (for 91 games in total!). Teams are currently being announced, and, as expected given Antwerp's location, represent most of nearby countries!

Roller Derby Caen host the first ever "Bikin'it" Summer Tournament, featuring teams from nearby in France! This is a two-day event, for a 3 team round robin, and rookies bonus game, on the Saturday, and a picnic on the Sunday!

Rookie bout not listed on FTS as it's not rateable

Roller Derby Toulouse host a two day event: on Saturday, a quadruple header featuring almost all of RDT's teams and a roller disco; on Sunday a whole Sur5al tournament!

Bairn City Rollers host the final fixtures of the British Championships Tier 2 North (MRDA-side). As we reported earlier , these two bouts are important for the teams in them, although they cannot change the promotion from this division.

Dublin Roller Derby host an exciting international Irish double header, as Scranton/Wilkes Barre's B team travel all the way over the Atlantic for some derby. This is also Dublin Pride weekend, and we believe that Dublin Roller Derby are planning to be part of the Parade as well.

Dark Side Roller Derby host an open Introductory Workshop on Roller Derby, for the public and anyone interested in the sport.

Blue Jay Rollers host a Festa Junina (Brazilian traditional "midsummer" festival, except in midwinter) for all interested. The thing that interests us most is what we think is "target shooting" being advertised...

Hienas de la Calle host a triple header event, as they host teams from Fiske Menuco and locally, as well as a Open To All black v white scrimmage.

Rock City Roller Derby host, with their usual exceptionally late notice, a triple header of Mexican derby. This is all Queretaro versus CDMX, with all three games pitting the two cities against each other at different levels.

Additionally, these events in North America are of interest due to the attendance of other teams:

Wine Town Rollers host Baja California's Baja Roller Derby. Wine Town like having their bouts in the morning, which is a bit different to the situation in Europe, so this game starts at 0930, California time!